Monks tended Buçaco Forest for over a thousand years

Covering more than 100 hectares of prime terrain, Buçaco Forest rises majestically out of the coastal plain north of Coimbra to form one of the most luxuriant areas of woodland in the whole of Portugal. Aided by the soothing combination of the mountains and the sea, it is a deeply refreshing place to spend some time in an area well tempered by the region’s mild, sedative climate.

Buçaco (or Bussaco in English) is a hidden world of moss-covered paths crisscrossing an enchanting wonderland of grottoes, tiny chapels, pools, fountains and fertile forest.

Monks tended this magical hideaway for over a thousand years, maintaining a strict code of silence and deep meditation as they went about their business.

The Benedictines established a hermitage here as early as the 6th century, which continued well into the 11th century when clericals in the nearby city of Coimbra agreed to take over its upkeep.

It was the Order of the Discalced Carmelites who built Buçaco’s famous monastery in 1628, later adding the walls which still mark its boundary today.

They then set about propagating the forest with a profusion of exotic species – many of them new to Portugal – which had been gathered by their missions all around the world.

It remained a place of intense religious contemplation until the dissolution of the monasteries in 1834, but today Buçaco Forest (indicated on the Google map below) continues to flourish on account of its precious variety of trees, most notably the towering Buçaco cypresses (cupressus lusitanicus).

A magnet for botanists and tree experts the world over, the glorious Cypresses of Buçaco have a history and charm all of their own. In the 16th century, the monks acquired their seeds from a sister community in Mexico and planted them amongst the verdant species of the native forest. Looming over Buçaco like huge parasols of emerald-green lace, the largest of these splendid trees is over forty metres high and has a girth of five metres.

Enhanced by the beauty and rarity of these enormous trees, the forest became so precious that in 1643 Pope Urban VIII issued a papal bull threatening anyone who damaged the ‘Trees of Buçaco’ with excommunication.

As you wander around, don’t miss the Cold Fountain (Fonte Fria) fed by the cool spring waters cascading down 144 stone steps into a lake, nor the winding Via Sacra lined with tiny chapels and terracotta figures depicting the stages of Christ’s journey to Calvary.

Visitors are also urged to spend some time soaking up the time-worn splendour of the Bussaco Palace Hotel, a building of striking neo-Manueline architecture set in its own peaceful gardens.

And before you leave the forest, spare a thought for the soldiers who lost their lives during a decisive battle on this very spot in the Peninsular War, when the great British general Sir Arthur Wellesley faced Napoleon’s army led by Marshal Masséna on the 27th of September 1810. The French suffered 4,600 casualties against Wellesley’s 626 and their defeat ultimately led to the end of the conflict. A military museum recounts the story of the Battle of Buçaco with a rare collection of maps, weapons and uniforms.

There’s plenty of additional tourist interest in the environs of Buçaco Forest, including the pretty spa town of Luso famed for the curative properties of its waters which rise at a temperature of 26.6ºC (80ºF) and gush freely from its fountains in the centre of town.

30 kilometres due south of Buçaco lies the magnificent city of Coimbra, birthplace of six kings and the seat of one of the world’s oldest universities. Built in the 12th century on the site of a Moorish mosque, its ancient cathedral is one of the finest examples of Romanesque architecture in Portugal.

The Beiras of Central Portugal 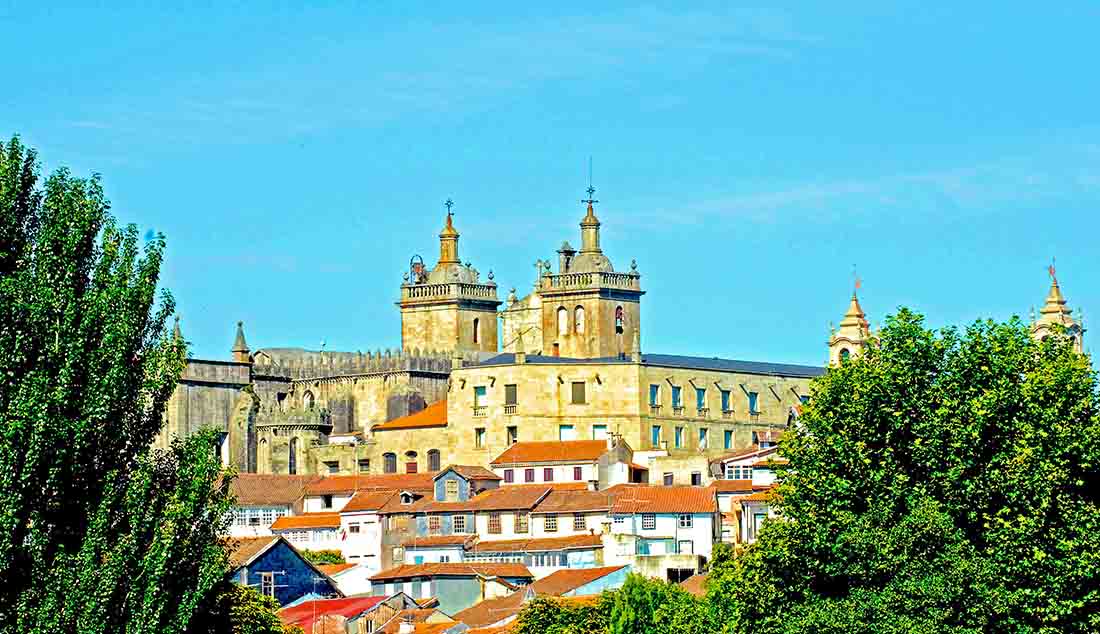 The City of Viseu