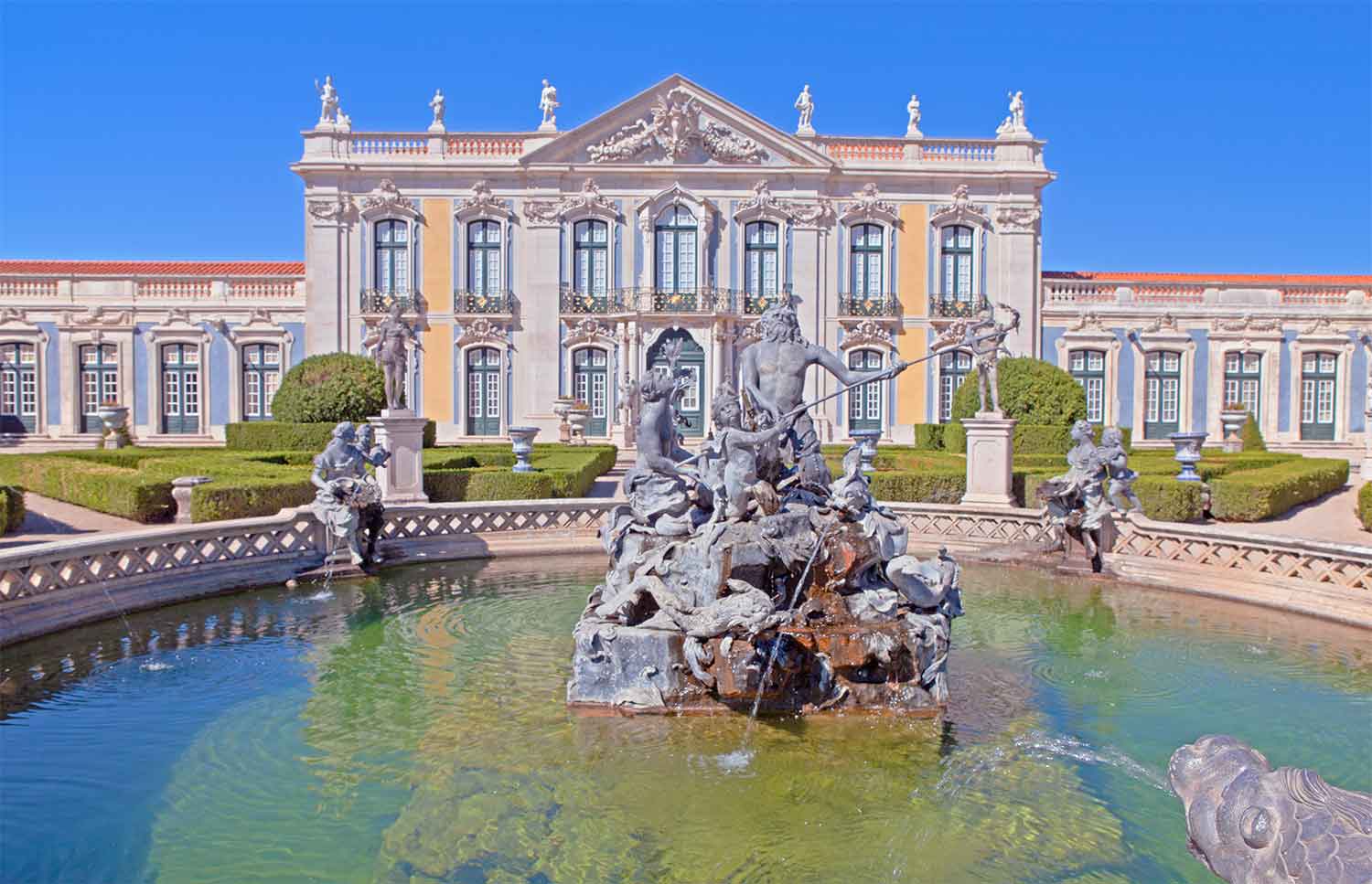 Elegant and restrained, the former royal summer palace of Queluz to the west of Lisbon is a popular stopover for visitors en route to the ancient village of Sintra.

Located in the bustling suburb of Queluz, just 14km (8 miles) west of the Portuguese capital, it is considered to be one of Europe’s most brilliant and shining examples of rococo architecture and the building (along with its rambling 18th-century gardens) still retains a very strong sense of its long royal history.

Transformed from a 17th-century hunting lodge, it was commissioned by Prince Pedro (later to be crowned king) and built between 1747 and 1794 by the French architect Jean-Baptiste Robillon and the Portuguese Mateus Vicente de Oliveira. Once finished, it became the preferred summer residence of the Bragança dynasty and the favourite palace of Queen Maria I, who resided there throughout her troubled 39-year reign.

A determining factor in the palace’s development was the prince’s marriage in 1760 to his niece and heir to the throne, Princess Maria, which brought him the title of King Pedro III of Portugal because the couple had already produced sons when she acceded to the throne.

The palace interior consists of a series of charming rooms and halls leading out of each other, all with their own fine array of beautifully-painted walls, gilt mirrors and sumptuous ceilings. The most lavish of them all are the richly-ornate Throne Room with its sparkling Venetian chandeliers, the Ambassadors Hall (notable for its lovely troupe l’ceil ceiling), the oval Hall of Mirrors and the royal bedroom (Don Quixote Chamber) where King Pedro IV was born and died.

Comprising a central block and two extensive wings, the palace is renowned for the high quality of its craftsmanship and is filled with Portuguese tapestries and furnishings, Florentine marbles, Delft tiles (some very old), Chinese screens, rare Austrian porcelain, carpets from Rabat, wood pieces (jacaranda) from Brazil and many other exquisite antiques.

Adorned with formal balustrades, stately fountains and exquisite statuary, its perfectly-manicured gardens designed by Robillon in 1763 are the pride of the palace and a must-see attraction for visitors exploring the Greater Lisbon area.

Amidst its neatly-sculptured box hedges, shaded ponds, hidden grottoes, towering cypress trees and leafy walkways, a rich scattering of exotic bushes have been barbered into a variety of inventive shapes, and in summer the whole area is aglow with ancient magnolias, scarlet geraniums, mauve petunias, climbing roses and cascades of bougainvillea.

Entering the garden via the impressive Lion Staircase, the royal household and its many aristocratic guests would enjoy summer banquets, serenades, concerts and firework displays before boating along the azulejo-lined Dutch canal in the heart of the palace grounds.

In the early 19th century, dozens of live animals, including lions, tigers and monkeys, were kept in a menagerie (now adapted for falconry) flanking Queluz Palace’s famous Shells Cascade. The animal tradition continues to this day with occasional displays of dressage and horsemanship performed by the Portuguese School of Equestrian Art (Escola Portuguesa de Arte Equestre) which is based in the palace gardens.

The royal kitchens now operate as an upmarket restaurant called Cozinha Velha (reservations are strongly recommended) that specialises in traditional Portuguese cuisine, the interior of which is also decorated with exquisite azulejo tiles and features a huge fireplace, giant spits, a long marble worktable and an impressive array of copper pans.