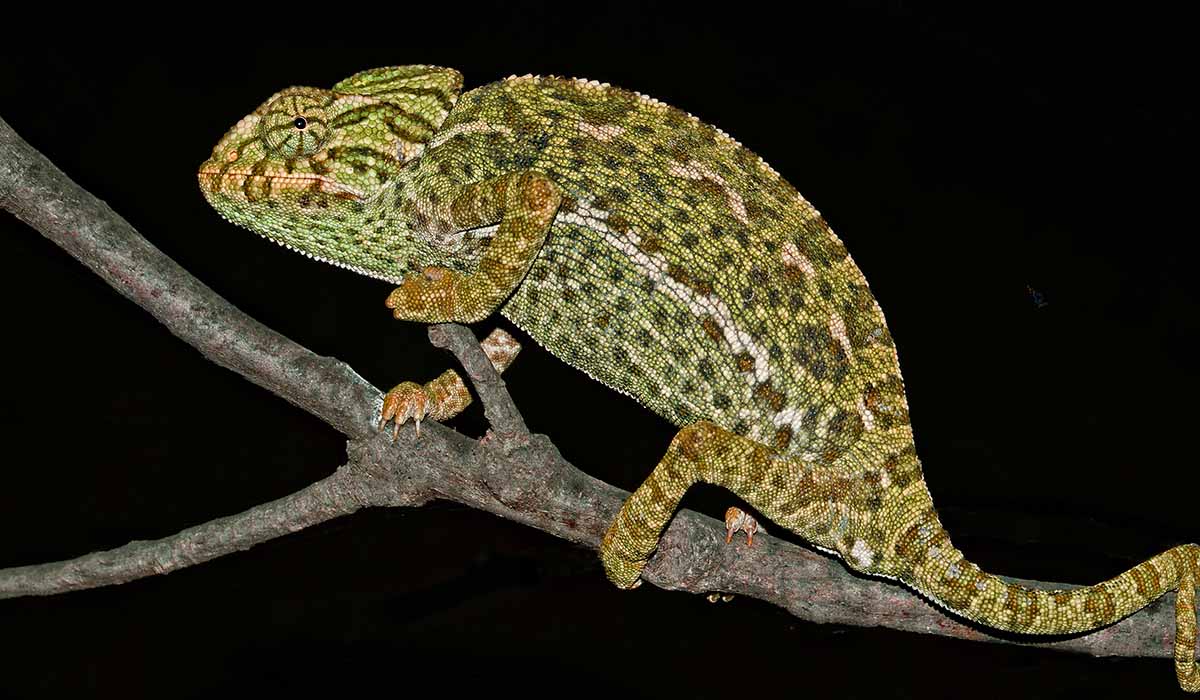 Chameleons are common in the Algarve

One of Portugal’s most precious creatures is the remarkable Mediterranean chameleon (Chamaeleo chamaeleon) which inhabits the coastal areas of the country’s sun-drenched southern shoreline.

An endangered species, it mostly lives in the pine groves and barrier islands in and around the protected Ria Formosa Natural Park (indicated on the map below), a protected area that stretches for more than 60 kilometres between Manta Rota and Ancão in the eastern Algarve.

They live in the wild although a few have been spotted in more cultivated environments such as some of the gardens attached to larger properties in the region, where they can thrive and mate provided that the habitat is conducive to their wellbeing.

With a tongue half as long as its body, it can reach thirty to forty centimetres in length (females are often substantially larger than males) and lives mostly on flies, grasshoppers, soft-bodied beetles and many other types of insect.

Considering how slowly and deliberately they move, it is amazing to see a chameleon’s tongue ejected at lightning speed to catch fast-moving insects with astonishing accuracy.   The chameleon has large bulbous eyes that operate independently of one another, thus allowing it to focus on and assess the distance of its prey simultaneously in order to attack more efficiently.

It also has the ability to change the colour of its body to various shades of grey, brown, yellow, green and even black to blend in with its surroundings.   The chameleon’s skin comprises several layers of varying pigments and this stunning colour transformation can occur as a result of ambient temperature, its surroundings or even its mood.

The biological make-up required to carry out this rare colour change has been perfected over millions of years of evolution and is facilitated by groups of extraordinary cutaneous cells, most notably chromatophores.

This very timid animal is difficult to spot during the day and very often the only visible sign of its presence is the cautious movement of its eyes which can cover extremely wide angles.

A chameleon’s hands are another distinctive feature, with each comprising three fingers and two thumbs to aid climbing. It also has a long prehensile tail which sometimes acts as a fifth hand for increased balance.

It can be difficult to tell the difference between the females and the males; the latter has a curved, keel-like carina close to its skull whereas the female’s is shorter and less prominent. Another difference is the base of the male’s tail which is thicker than that of the female.

The female chameleon is oviparous and sometimes dies after producing anything between nine and thirty eggs, normally deep within a burrow of sandy soil in a secluded area.

It’s a thrill for visitors when they stumble upon this magnificent creature, often by accident and always with great surprise, but while this species is still relatively common throughout the eastern Algarve, it continues to be threatened by habitat loss principally through urban development, wildfires, the intensification of agriculture, predation by domestic animals and illegal collection for the pet trade.