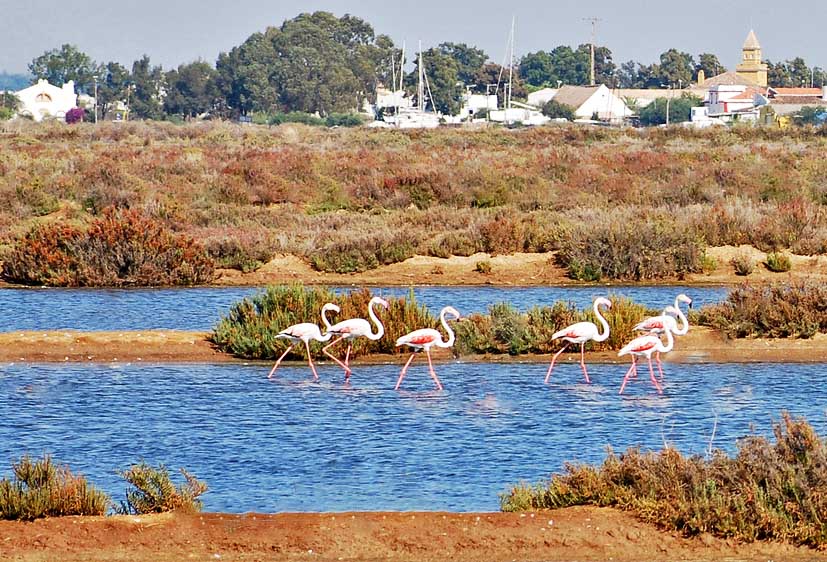 Officially established in 1987, the Ria Formosa Natural Park is one of Europe’s most important wetland areas covering 18,400 hectares and encompassing a barrier island system stretching 60 km between Ancão and Manta Rota in the eastern Algarve.

Essentially it is a lagoon separated from the sea by a coastal dune system and an important wintering ground for birds from northern and central Europe, as well as being an important stopover for migrant birds flying between northern Europe and Africa.

It is also a place of refuge for rare Portuguese birds and a nesting site for many endangered species.

Formed by peninsulas and sand barrier islands which serve to protect the various salt marshes, channels and islets, the area includes a narrow strip of land and a series of coastal dunes running almost parallel to the mainland.

Around 7,000 years ago, the level of the sea was much lower than it is now and great quantities of sand some thirty to forty metres deep gradually accumulated to form submerged sand ridges which developed into the barrier islands we see today.

Parallel to this, the local rivers deposited large amounts of sediment which resulted in the salt marshes and islets that today form an integral part of the Ria Formosa Natural Park (indicated on the Google map below).

Salt marshes rank among the most productive ecosystems on the planet and salt has been harvested in Ria Formosa for more then 2,000 years. Today, the salt-pans provide a natural habitat for many species of birds while five large Roman salting tanks give visitors a good idea of how the Algarve’s locally-caught fish was salted and preserved prior to being distributed all over the Roman Empire.

Set within Ria Formosa’s boundaries, the Quinta do Lago nature trail traverses a large portion of the nature reserve and provides hides for the spotting of many rare birds such as the purple gallinule which can occasionally be seen feeding in the reeds of the resort’s golf courses, which rank amongst the best in Portugal.

There are three excellent nature trails to follow, each with its own unique combination of salt marshes, woodlands and freshwater lagoons to enjoy. Low season can be particularly rewarding when large flocks of greater flamingo and spoonbill can be seen mingling with pintail, gadwall and teal under a strong winter sun.

Endemic to the Algarve and parts of southern Spain, another charismatic inhabitant of the Ria Formosa Natural Park is the Mediterranean chameleon (chamaeleo chamaeleon) which thrives in the pine groves and coastal areas of the eastern Algarve.

A heavily protected species, it can reach thirty centimetres in length and has a tongue that’s often half as long as its body with a sticky tip to retrieve its hapless prey, mostly flies, soft-bodied beetles and other insects.

There are two features that make the chameleon very different from all other reptiles, most notably its ability to change colour rapidly to shades of grey, brown, green, hues of yellow or even black to help blend in with the surrounding vegetation.

The second remarkable feature of the Mediterranean chameleon is its large bulbous eyes which work independently from each other, enabling it to simultaneously focus and judge the distance to its prey in order to strike more accurately and efficiently.