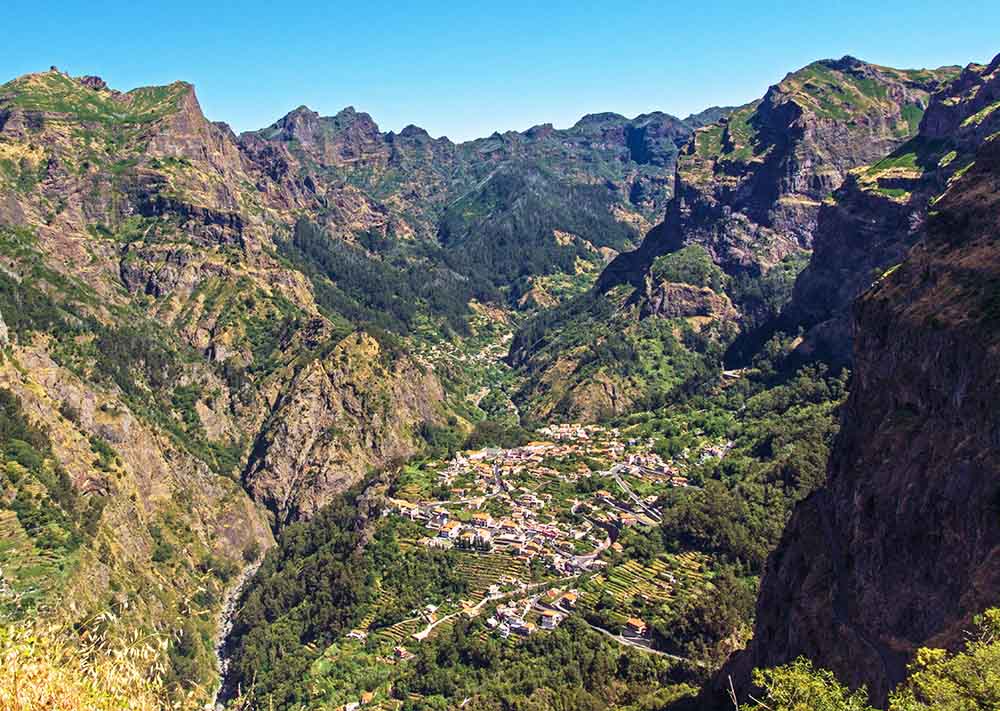 Nestling in a vast mountain bowl a thousand metres deep, the small whitewashed village of Curral das Freiras is one of Europe’s hidden gems and the most majestic place on the Atlantic island of Madeira.

Set in a crater-like depression and hemmed in by high mountains, the ‘corral of the nuns’ (as its name translates) refers back to 1566 when nuns from the Santa Clara Convent in Funchal sought refuge in this remote spot whilst French pirates attacked and pillaged their city.

In those days there were no roads and the nuns’ journey was long and tortuous, not to mention dangerous, but they made it through and eventually the village was born.

Accessible by long and winding mountain roads, many of which have been tunneled through the rock, Curral das Freiras (indicated on the Google map below) is reached by heading west from Funchal through the city’s upper fringes to the suburb of São Martinho, where the towering Pico dos Barcelos gradually comes into view.

The road cuts through dense masses of flowering shrubs and high sugar-canes over which rise clambering vines from which Madeira wine is made.

Up on these high mountain slopes, the mists are often thick as the road meanders its way through heather, fresh-scented pinewoods and juniper trees. Silence and solitude reward visitors to these lofty heights, which are backed by the great rocks of the island’s stony core.

Perched on the north-east edge of the Pico Serrado, the look-out point of Eira do Serrado looming 1,053 metres (3,455 feet) above Curral das Freiras affords head-spinning vistas of the surrounding mountainscape.

From here we get out first glimpse of the pretty mountain village, the focal point of a natural horseshoe-shaped arena burrowed deep into the middle of the island. The view, enhanced by a profusion of exotic shrubs and flowers, encompasses a magnificent prospect of the entire south coast of Madeira.

A very pleasant footpath descends to the village through sweet chestnut woods. This was once its only means of access and most probably the route used by the nuns all those centuries ago, but not until 1959 was a road built down into the interior linking Curral das Freiras with the outside world.

The village itself is a sleepy place of around 2,000 souls who are mostly engaged in agriculture, basket-making and tourism-related services. Once there, there’s little else to do except soak up the atmosphere of a place that shrives on its peculiar form of peaceful isolation, a rare commodity in this day and age.

One of the few buildings of note in Curral das Freiras is the 19th-century church of Nossa Senhora do Livramento which contains some attractive azulejo tiles and fine stained-glass windows.

The journey back to Funchal should include visits to Cabo Girão (one of the world’s highest sea cliffs) preferably at sunset and Câmara de Lobos, a quaint little fishing village once favoured by the great statesman, Sir Winston Churchill.