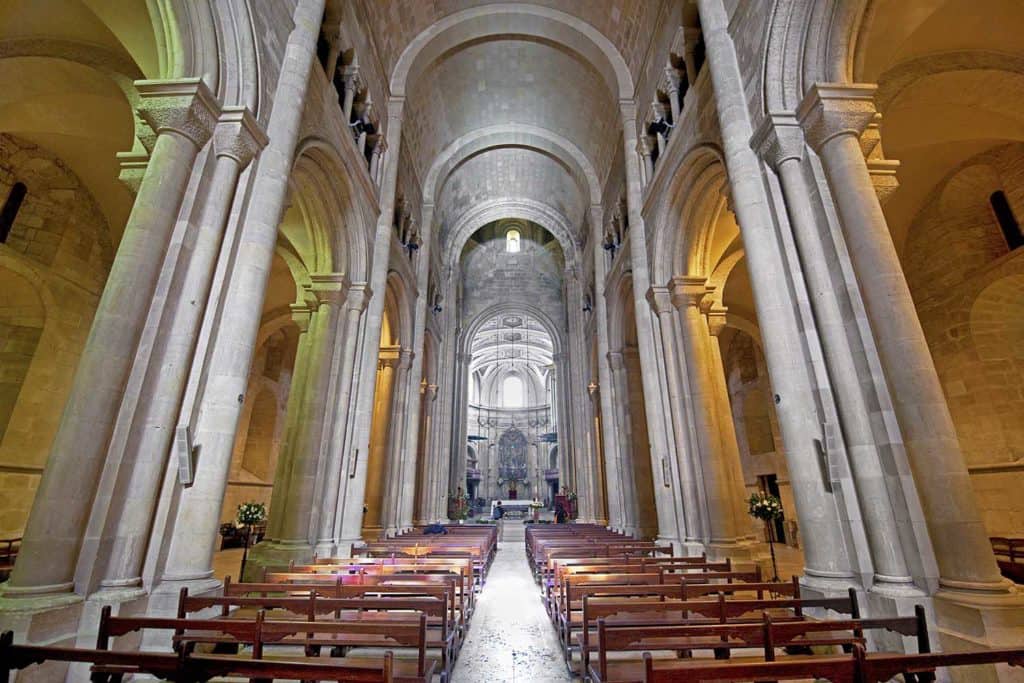 Lisbon Cathedral was built in the 12th century

The construction of Lisbon’s imposing cathedral began in the middle of the 12th century, during Afonso Henriques’ siege and capture of the city from the Moors.

The building was designed in 1150 by Masters Robert and Bernard, the pair who worked on the Sé Velha cathedral in Coimbra, central Portugal.

Originally known as the Church of Santa Maria Maior, it is believed to have been built on the site of an old Roman temple that was later converted into a Visigothic church. Traces of the latter can be seen in the carved stone inserted into the first buttress on the cathedral’s north side.

The first Bishop of Lisbon was an Englishman, Gilbert of Hastings, who arrived with the Crusaders to help liberate the city and stayed to care for the conquered souls. It was for his needs that Afonso Henriques, Portugal’s first king, ordered the cathedral to be built.

Three earthquakes have shaken Lisbon since the time of its construction, most notably the great earthquake of 1755, but remarkably the cathedral stands firm in its prominent downtown location overlooking the city’s ancient Baixa and Alfama districts.

Sturdy as a medieval fortress, the façade is dominated by two robust bell towers which project deep into the cathedral’s doorway, upon which three carved heads depict the martyrdom of three brothers – Veríssimo, Máxima and Júlia – who were victims of Diocletian’s persecutions in the early 4th century AD.

The cathedral’s barrel-vaulted interior comprises three naves and a transept, with the central nave covered by a dome. Beneath the archaic divisions runs the triforium which floods the transept walls with soft, golden sunlight.

The transept opens on to the Chapel of the Blessed Sacrament where visitors can admire an impressive chandelier and Pedro Alexandrino’s early 19th-century painting of The Last Supper.

Beneath the north tower, the vaulted baptistery is covered with glazed azulejo tiles dating from the 17th century and it was here that St Anthony, Lisbon’s most popular saint, was baptised in 1195.

Perfectly set between the building’s two striking towers, an exquisite rose window is a delight for visitors and does much to embellish and enhance the defensive character of the building.

Built in the late 13th and early 14th centuries, the pure Gothic cloister provides access to a series of ambulatory chapels, one of which contains a superb image of Our Lady of Betancor which was made in a Normandy workshop in the 14th century, while another of the ancient chapels features a rare and very well preserved medieval wrought iron grille.

There’s much more for the visitor to see inside Lisbon’s magnificent Sé Cathedral (indicated on the Google map below), most notably the relics of St Vincent, the patron saint of Lisbon, as well as the tombs of King Afonso IV, João Anes (Lisbon’s first archbishop) and nobleman Lopo Fernandes Pacheco with a dog sat devotedly at his feet.

The cathedral also features an 18th-century Christmas crib by Joaquim Machado de Castro and a rare collection of religious vestments and ecclesiastical gold.

Begun in 1990, ongoing excavation works in the cloister garden have unearthed a series of structures from different periods of history, dating from 4 BC to the time the cloister was completed in the 14th century. Large quantities of Phoenician ceramics have been found there, much of which was imported from the Mediterranean in the 5th and 6th centuries BC.