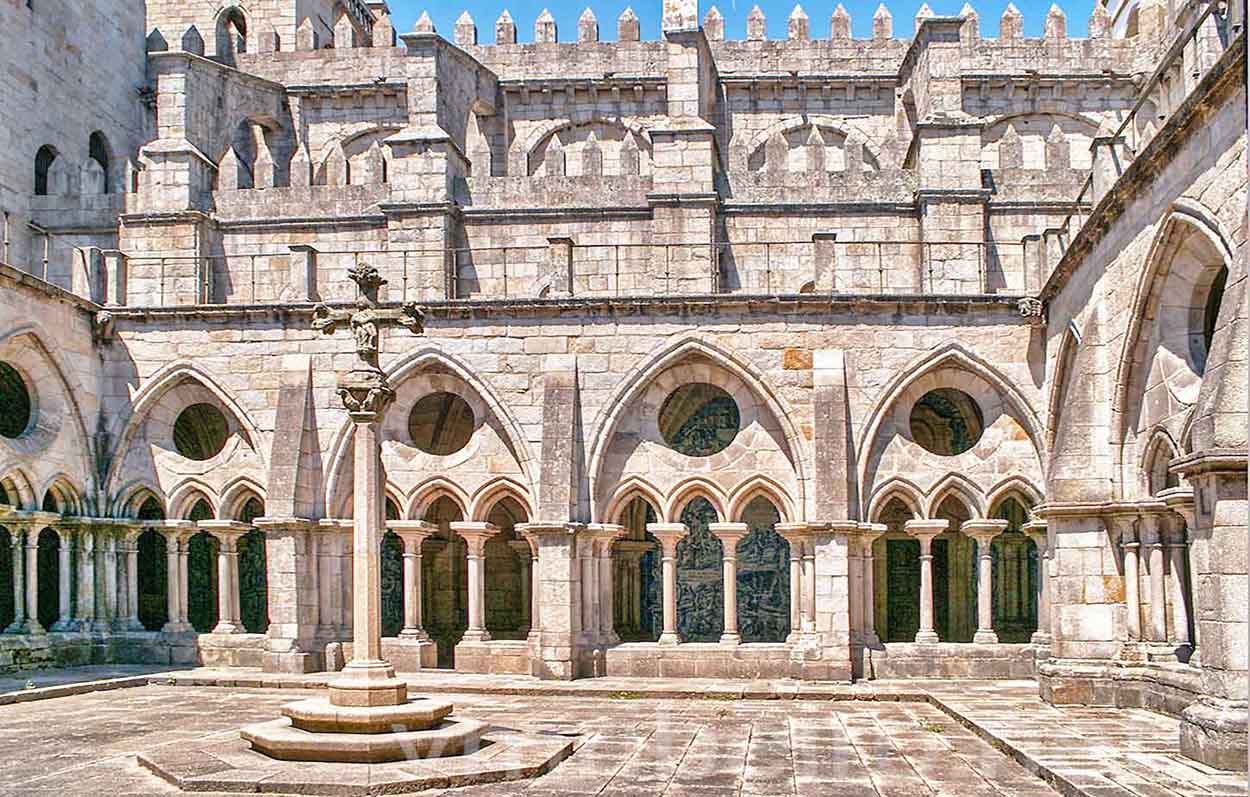 Closely associated with the beginning of the Portuguese monarchy, the national Gothic style is elegant and ethereal with strains of the Romanesque sobriety and austere grace seen in some of its earliest examples.

By virtue of their impressive dimensions, the finest illustrations of Gothic architecture in Portugal are particularly notable for the clarity of their design, the quality of the materials used and the care with which they were constructed.

Each of the principal phases of Gothic architecture is widely represented in Portugal, but the domestic style developed most rigorously towards the end of the 13th century when King Dinis, a prodigious builder, began replacing the transitional style with a more typically Portuguese style in churches, fortresses and castles all over the country.

Many of Portugal’s churches from that feature strong Gothic elements, such as the cloister of Porto’s Sé Cathedral (indicated on the Google map below) and the richly-sculpted portal of Évora Cathedral. Other fine examples  are the fortified Templar church at Leça do Balio (near the northern city of Porto) and the octagonal Dominican church of Elvas in the Alentejo, notable for its tile-faced dome supported on columns, is a marvel of architectural simplicity.

The transition from Romanesque to Gothic was also quite suited to the many castles constructed during this increasingly volatile period, such as those at Óbidos, Monsaraz, Guimarães, Almourol, Leiria and Lisbon’s imposing Castelo de São Jorge.

Begun in 1178 and consecrated in 1222, the monastery itself is Portugal’s earliest and most remarkable Gothic building and considered one of the most serene and strikingly impressive churches in the whole of Europe. Inside, the hauntingly simple two-storey Cloister of Silence (Claustro do Silêncio) is a gem of the Cistercian Gothic style with pointed vaulting and triple windows.

Constructed throughout of an ivory-coloured limestone, the Dominican Monastery of Batalha just 20 kilometres to the north-east of Alcobaça is another national treasure of highly original proportions. Classified as a UNESCO World Heritage Site in 1983, it is notable for its founder’s chapel, royal cloister and chapter house.

The stylistic Gothic influence of Batalha can be seen in other parts of the country, namely Guarda Cathedral in central Portugal and the ruined Carmo Church located right in the very heart of Lisbon. The Franciscan convent in Santarém (completed in 1240) is also worth visiting for its fine cloister dating from the 13th-15th centuries featuring pointed arches and charming twin columns.