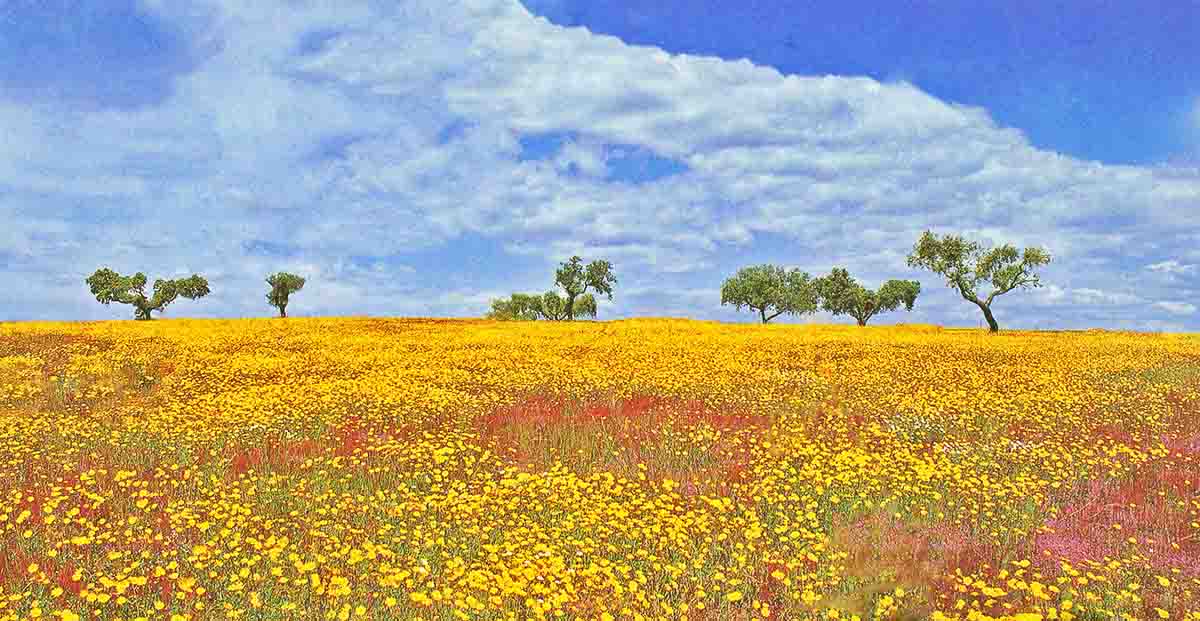 Alentejo is the most vivid of Portugal’s landscapes

With its colourful vistas, wide-open roads and dazzling whitewashed villages, the great expanse of the Alentejo is perhaps the most vivid of Portugal’s landscapes. Occupying nearly a third of the mainland, the region is most charming in springtime when wild flowers saturate the lush meadows and pastures.

There’s no better place to appreciate the colours of spring, spread out like a vast painter’s palette as far as the eye can see, from the pure white of the moondaisies to fields of scarlet poppies and blue fountained anchusas.

Many old traditions still survive here. Shepherds can still be seen in their great sheepskin capes and in many areas the highly individual Alentejan singing thrives with hauntingly harmonious male-voice choirs singing about the travails and hardships of working the land.

The Alentejo is also linked to many of the most important chapters of Portuguese history. It saw the birth of Vasco da Gama at Sines and the death of the ‘Holy Queen’ Isabel at Estremoz.

It was at Atoleiros that the gallant knight Nuno Álvares Pereira scored his first victory and it was at Vila Viçosa that King Carlos spent his last night before being gunned down and killed by republican activists in Lisbon‘s Praça do Comércio.

Geologists suggest that the subsoil of the Alentejo is extremely varied, with certain elevations of the land such as Serra de São Mamede being an extension of the relief of the Toledo region in neighbouring Spain, while the great central depression and lowlands of the Sado Valley are believed to have been covered by water millions of years ago.

Another of the jewels in the Alentejo’s glittering crown is its long sandy coastline sweeping south to the Algarve all the way from the enchanting Tróia peninsula. Before the advent of tourism, the most frequent visitors to this part of Portugal were North African pirates who wreaked havoc in the 16th century.

For hundreds of years the region remained a battlefield, first against the Moors and then against a succession of Spanish invaders. Today it’s a calm, peaceful and very fertile province that produces more than half of the world’s total cork supply.

Nine years are needed for a cork-oak to grow a new bark. When ready, it is taken off in wide strips before the sap leisurely heals the abrasion and recreates, layer by layer, one of the planet’s lightest, most resistant and increasingly precious materials.

At the heart of the region, the walled city of Évora (indicated on the map below) is a very good base from which to explore the many outlying towns. Standing proud as the Alentejo’s largest city, it boasts a Roman temple and an impressive Gothic cathedral.

A short drive north lies Estremoz, a pretty marble town famous for its earthenware and 13th century castle. The region is also popular for the many fortified hilltop villages dotted along the Spanish border, most notably those at Monsaraz, Marvão and Castelo de Vide.