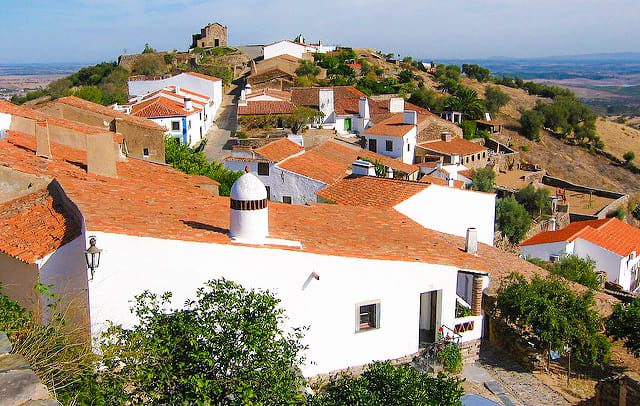 Perched high above the River Guadiana close to the frontier with Spain, the tiny medieval walled village of Monsaraz to the east of Évora is one of the most atmospheric places in the entire Alentejo region.

With its narrow cobbled lanes, low-rise houses and striking picture-book castle, visitors can feel the true essence of medieval Portugal in one of the oldest places in southern Europe.

Monsaraz has been inhabited since prehistoric times as the Celts, Romans, Visigoths and Moors each took full advantage of the hill’s defensive potential.

Regained from the Moors in 1167, the town was handed over to the Knights Templar before King Dinis added the castle and fortified walls in the 14th century.

From the ramparts you can gaze east over the Guadiana to neighbouring Spain, or west across the great plains of the Alentejo. In recent years, the village has become a popular stopover for visitors travelling by boat on the vast Alqueva reservoir, one of the largest man-made lakes in Europe.

Monsaraz parish church, the Igreja Matriz de Santa Maria do Castelo, houses an ornate marble tomb dating from the 13th century. Next door is a religious museum containing a 14th-century fresco of a judge being simultaneously tempted by the devil and encouraged by the majestic justice of Christ.

A number of interesting prehistoric sites exist in the surrounding areas of Monsaraz, including the spectacular Menhir of Outeiro which stands almost 6 metres tall.

The little village of São Pedro do Corval 12 km to the west is popular for its pots, plates and other locally-produced ceramics.