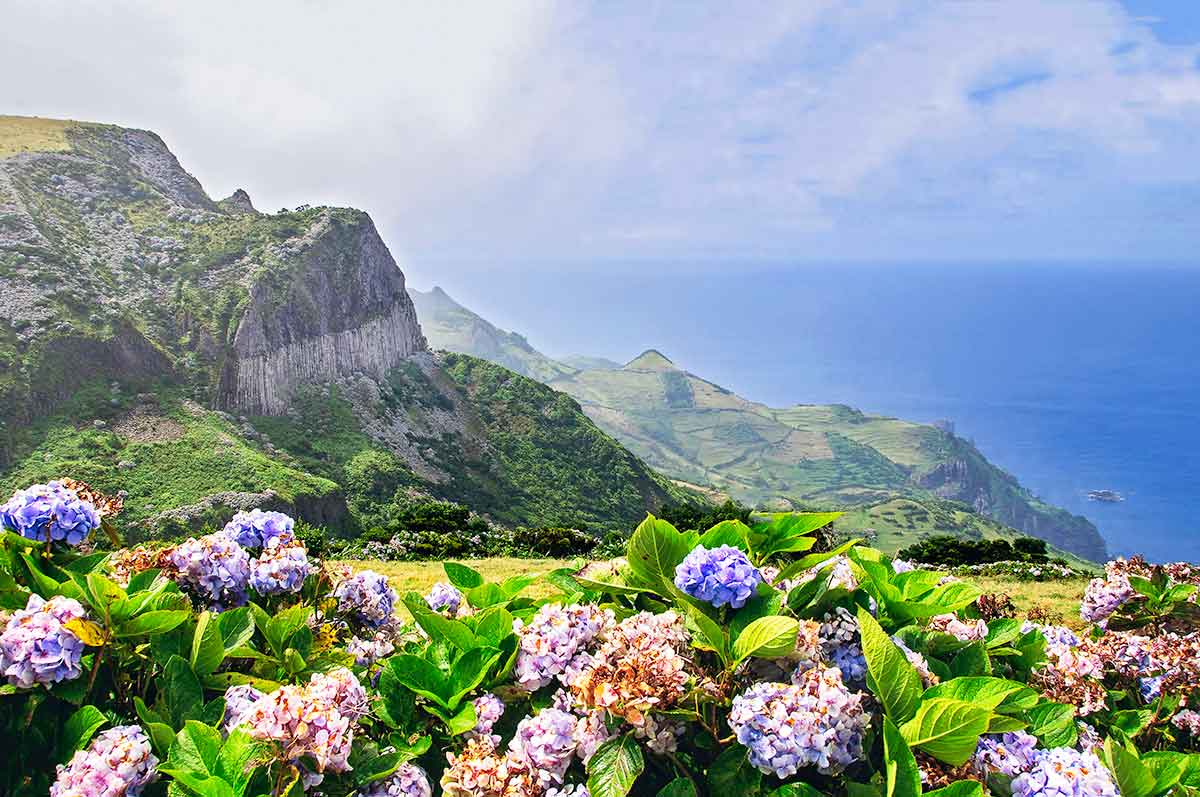 One of the remotest places in Europe, Flores (along with its sister island, Corvo) is part of the western group of the Azores archipelago and is classified as a UNESCO Biosphere Reserve.

The most westerly of all the nine islands in the Azores, this luxuriant piece of fertile land in the middle of the ocean was claimed by medieval historians to be a precious fragment of the lost continent, Atlantis.

Its name derives from the profusion of flowers that carpet the island from one side to the other, most spectacularly in springtime and throughout the warm summer months.

Worthy of Van Gogh’s palette, Flores (indicated on the Google map below) is a study in colour with an abundance of flowers that flourish in the island’s rich volcanic soil, most notably azaleas, camellias, hydrangeas, wild heather and rhododendrons.

And as is the case with all the islands in the Azores, the pasturage on Flores is exceptionally good and the local farms are renowned for their rich dairy products, particularly milk and cheese.

Following its discovery by Portuguese navigators in the late summer of 1452, early attempts to colonise Flores of paradise were largely unsuccessful until groups of farmers and herdsmen from northern Portugal arrived some years later.

Today it’s sparse population of just over 3,000 souls live peacefully and happily in one of the mildest climates on the planet, with the island’s meteorological cycle often famously described as having all four seasons in one day.

Occasionally lashed by storms, this enchanted island enjoys average temperatures around 14.5C (58F) in winter and 24C (75F) in the peak summer months of July and August.

Notable for its undulating terrain, the highest point being Morro Grande at 915 metres (3,002 feet), Flores is unique for being at the exact centre of the wind rose, and the winds of the Atlantic are very much in equilibrium at this spot.

The most impressive of the island’s many natural attractions is Sete Lagoas (Seven Lagoons), a group of small lakes of different shapes and sizes, with Lagoa Funda (Deep Lagoon) arguably the most scenic of them all.

The island’s west coast is a great amphitheatre of cliffs with numerous waterfalls tumbling down into the ocean below. Hikers the world over are drawn to this unique shoreline for the main reason that it is the most westerly in Europe.

The walk stretches for 22 km (14 miles) starting from Lajedo in the south and finishing in the pleasant town of Ponta Delgada on the island’s northern tip, passing an usual rock formation called Rocha dos Bordões and Ilhéu de Monchique (officially Europe’s most westerly point) en route.

Other highlights to look out for on Flores’ spectacular west coast include the Vale da Fajãzinha, a deep valley with several cascading waterfalls, and the charming 18th-century church of Nossa Senhora dos Remédios which punctuates the shoreline with its striking bell tower.

Despite being the island’s capital and largest town, Santa Cruz das Flores (located about halfway along the east coast) still has the atmosphere of a busy fishing port with boats drawn up on the beaches and nets laid out for mending.

Elegant churches built over many centuries provide this airy seaside town with plenty of architectural significance, most notably the Igreja de São Pedro, which is particularly notable for its lovely carved and gilded high altar.

Of equal interest is the Igreja de São Boaventura, a delightful convent church built in 1641 and featuring a beautiful carved cedar wood chancel. The on-site Museu das Flores is one of the best cultural attractions in the Azores and houses a fascinating ethnographical collection focusing on the island’s whaling heritage with many rare pieces of scrimshaw on display.

Of all the island’s other interesting towns to explore, Lages stands out as being the second-largest and is worth visiting for its impressive 18th-century church.

The neighbouring island of Corvo just 13 nautical miles to the north is the smallest in the Azores with a population of just 400 people. Its isolated splendour is a major draw for bird-watchers who flock there from all four corners of the world in the hope of spotting the white-rumped sandpiper, rose-breasted grosbeak, laughing gull and (very, very occasionally) the yellow-billed cuckoo.