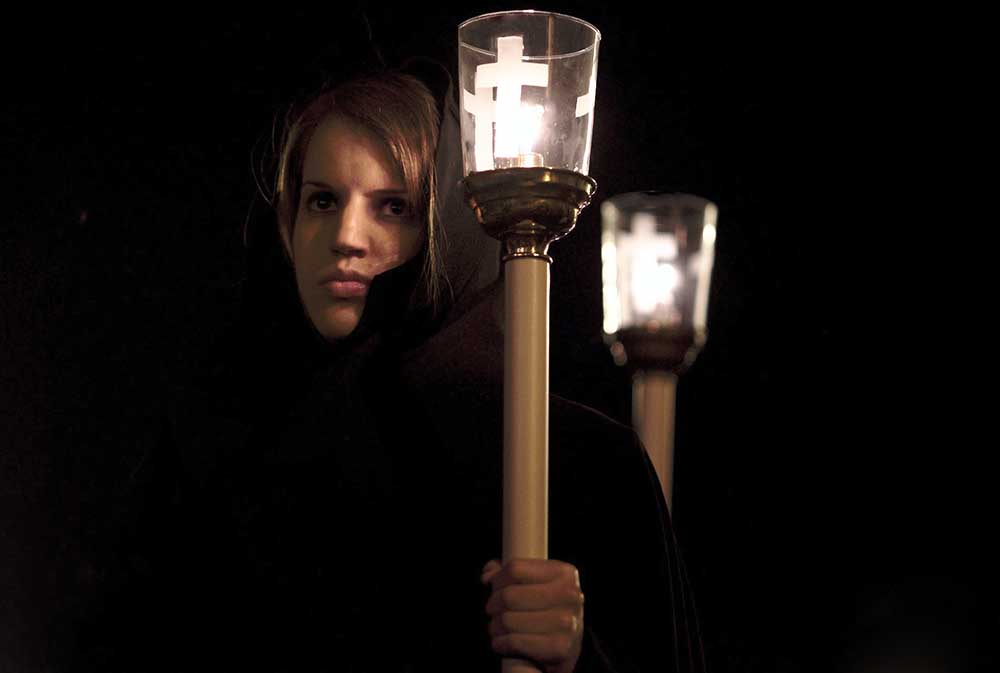 Braga is a popular place to celebrate the Holy Week festivities

Easter is a much-celebrated occasion all over Portugal but Braga, the country’s ecclesiastical capital, transforms itself into a place of pure pilgrimage and intense religious fervour during the popular Holy Week (Semana Santa) festivities.

Churches across the city are bedecked with banners embroidered with purple cloth, whilst inside their altars are beautifully arranged with flowers and candles representing the Stations of the Cross.

In the city’s ancient historical quarter, the eerie sound of Gregorian chanting resonates through strategically-placed loudspeakers lending the occasion a distinctly medieval atmosphere.

There’s a deep sense of history and solidarity as church icons and other religious treasures are paraded through streets lined with banners of ancient families whose ancestors fought desperately to liberate Portugal from the Moors.

Braga has been the see of archbishops for many centuries and the medieval grandeur of its numerous monuments is simply breathtaking.

Following long periods of destructive invasions from the Romans through to the Moors, the city was rebuilt by Bishop Pedro (1070-1093) who established it as one of the most important religious centres in the whole of the Iberian Peninsula. In the 12th century, it became the seat of Portugal’s archbishops and the country’s religious capital.

During the Holy Week festivities, besides the series of ceremonies taking place in the city’s 11th-century Romanesque cathedral, there are the important processions of ‘Senhor Ecco Homo‘ on the night of Maundy Thursday and that of ‘Our Lord’s Burial’ on Good Friday.

The nights are spectacularly illuminated by many of the city’s churches emblazoned with lights and thousands of people penitently walking barefoot and carrying candles or torches mounted on poles.

Semana Santa is celebrated over several days but the main festivities take place on four consecutive evenings with a series of allegorical processions that for centuries have been re-enacting important scenes from the Bible. These processions wind their way around the walls of the old Roman city, led by hooded penitents carrying torches which light up the roads where the faithful are gathered.

The proceedings traditionally begin on the night of the Wednesday before Easter with the procession of Senhora da Burrinha, which in true biblical fashion is led by a donkey. A large part of this enchanting procession consists of children parading in a gloriously colourful but very dignified manner.

But the most visually impressive spectacle during Braga’s Holy Week celebrations is the torch-lit Senhor Ecce Homo procession on Maundy Thursday. Starting and ending at the city’s cathedral, it is a very solemn and devout affair led by barefoot, black-hooded penitents known locally as farricocos who shuffle their way through the city’s medieval streets in an eerie silence.

Good Friday (which will fall on 2 April 2021 and 15 April 2022) sees the celebration of the Lord’s Passion with the Sermon of the Lord’s Burial conducted inside Braga Cathedral, followed by another night-time procession through the city.

On Easter Saturday the Vigília Pascal is observed, culminating with the Procession of the Resurrection through Braga’s historic centre.