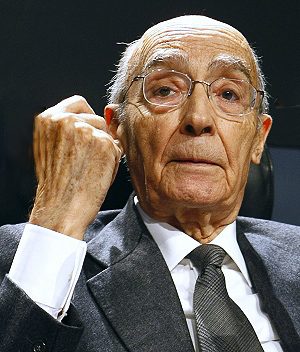 José Saramago won the Nobel Prize in Literature in 1998

Recipient of the 1998 Nobel Prize in Literature, José Saramago was one of the most thought-provoking and influential novelists of our age, winning a succession of prestigious awards and literary accolades during his lifetime.

Born in a small village 100 km north-west of Lisbon in 1922, he had a variety of professions, including spells as a mechanic, technical designer and a literary editor, before devoting himself entirely to his writing from 1979 onwards.

His opus embraces plays, poetry, short stories, works of non-fiction and several novels that have been translated into twenty-five different languages.

Saramago saw the world as one great theatrical arena where men and women play out games of life and death. He felt that each and every one of us is irresistibly drawn to our own destiny.

He was already in his fifties when his first novel appeared. In 1982, he established his international reputation with the release of Memorial do Convento (the English version was entitled Baltasar and Blimunda), which many critics consider to be his greatest achievement. This imaginative account of how the Convent of Mafra came to be built takes a satirical view of power and politics in Portugal during the first half of the eighteenth century.

An astute observer of human nature and its foibles, Saramago’s novels guide us through the ages of man as his characters bare their souls and eventually discover that ‘human nature with its endless contradictions and misunderstandings is not to be trusted’.

Favouring an uninterrupted sequence of extended paragraphs, Saramago’s work demands vigilant reading. He disregarded conventional syntax and his punctuation is restricted to commas and full-stops in order to sustain what he defined as a ‘continuous flow’.

Fluent and persuasive, his words pass effortlessly from description to speculation, from philosophical conceits to popular wisdom, and from elaborate metaphors to simple human utterances. His style has been described as sceptical and ironic yet reassuringly compassionate and understanding.

There’s an underlying ambiguity in everything that Saramago wrote and his books are made out of words as much as characters and incidents, with his narratives constantly shifting backwards and forwards in time like the ebb and flow of the tide.

Described by The Guardian newspaper as ‘the finest Portuguese writer of his generation’, José Saramago passed away peacefully at his home in Lanzarote in 2010. He was 87.

Visitors can learn more about his life and work at the Saramago Foundation located at the Casa dos Bicos (indicated on the map below) in downtown Lisbon.