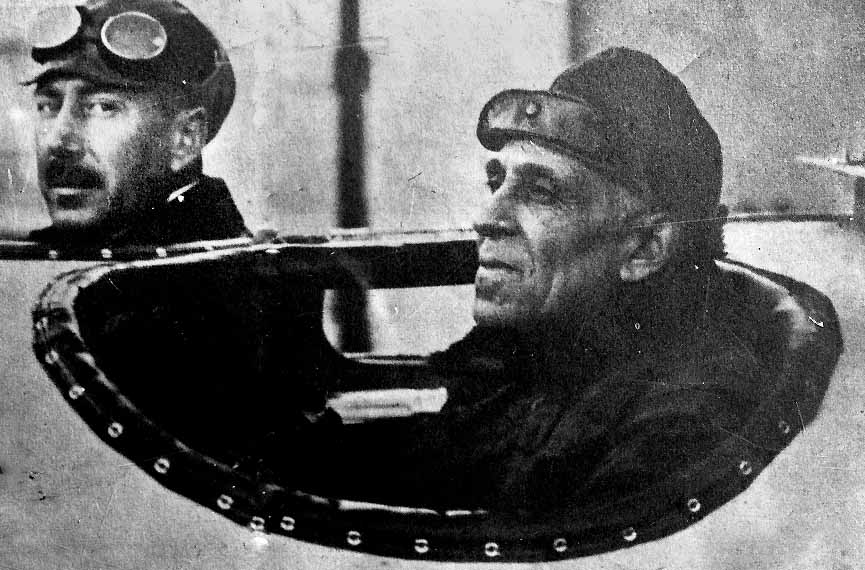 Charles Lindbergh might have received global recognition for his solo air crossing of the Atlantic in 1927, but it was two Portuguese pilots – Gago Coutinho and Sacadura Cabral (pictured left and right, respectively) – who had previously set the pace five years earlier with their historic journey from Portugal to Brazil, the world’s first-ever flight over the South Atlantic.

Although the North Atlantic had already been traversed in a non-stop flight by John Alcock and Arthur Brown in 1919, Coutinho and Cabral’s achievement remains notable as a milestone in transatlantic aviation, and for its use of new technologies such as the artificial horizon.

Using three separate Fairey III single-engine hydroplanes – named Lusitânia, Pátria and Santa Cruz, respectively – their epic pioneering flight began near the Tower of Belém in the Portuguese capital on the afternoon of the 30th of March 1922, ending triumphantly in Rio de Janeiro seventy-nine days later on the 17th of June.

The flight, which marked the centennial of Brazil’s independence, covered a total distance of 8,383 kilometres (5,209 miles), consisted of a series of stopovers en route at Las Palmas in the Canary Islands, São Vicente and Praia in the Cape Verde Islands and São Pedro/São Paulo, Fernando Noronha, Recife, Salvador da Bahia, Porto Seguro and Vitória in Brazil for refuelling, repair work, provisions and changing planes, whenever necessary.

Both high-ranking naval officers, Gago Coutinho and Sacadura Cabral hoped to follow in the footsteps of some of their intrepid forefathers, heroic Portuguese adventurers like Vasco da Gama and Fernão de Magalhães (Ferdinand Magellan) who wrote their own chapters in world history hundreds of years ago.

An expert in astronomical science, Coutinho took on the role of expedition navigator while Cabral concentrated on flying the planes. By deploying sextants and other such instruments, they sought to prove that astronomical navigation could be just as accurately pursued in the air as in water.

They achieved this and by doing so became the first airmen to cross the Atlantic using this age-old method of navigation.

Coutinho’s invention was a type of sextant incorporating two spirit levels to provide an artificial horizon. This adaptation of the traditional marine sextant allowed navigation without visual reference to the real horizon. He also invented an optical flight instrument, to be mounted on the plane’s cockpit floor, to measure leeway in flight whenever ground was visible.

Many incidents were encountered during the journey but ultimately overcome, such as problems of excessive weight during sea landings and take-offs and sudden bouts of unexpected bad weather that brought very heavy rainfall and winds so strong that one of the hydroplanes sank into the ocean.

Sadly, just two years after his record-breaking flight, Sacadura Cabral died along with his co-pilot whilst flying over the English Channel, having lost their way in thick fog. Neither of their bodies was never found.

Visitors to Lisbon might be interested to know that the third and final seaplane used to complete the journey, the Santa Cruz, is one of the star exhibits at Lisbon’s Museu de Marinha (Maritime Museum, indicated on the map below), which is located in the tourist centre of Belém. A life-size replica of the plane can also be seen close to the nearby Tower of Belém.