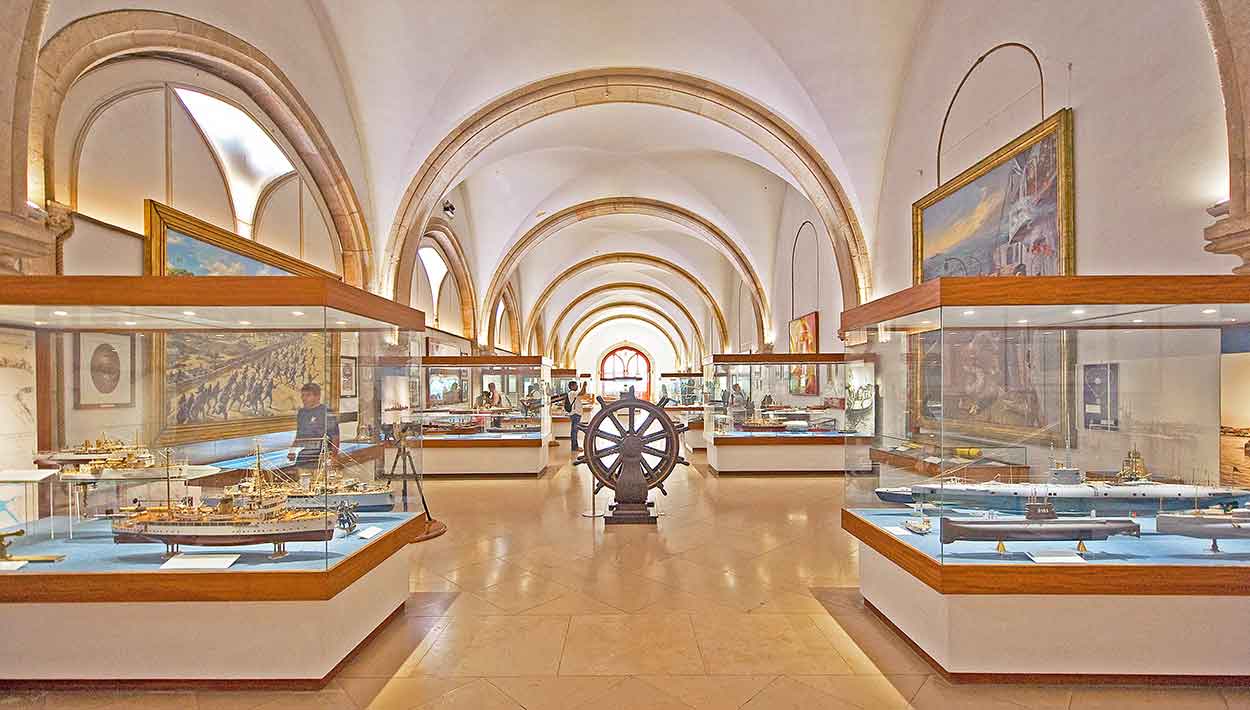 Located in the heart of Belém, a bustling tourist centre in the western suburbs of Lisbon, the excellent Museu de Marinha (Maritime Museum) is a top attraction for anyone interested in learning all about Portugal’s many seafaring achievements over the centuries.

Opened in 1962, it is set in two separate buildings situated on either side of the large esplanade in front of the Calouste Gulbenkian Planetarium, with the main section housed in the west wing of the magnificent Jerónimos Monastery.

Exhibits include a wide variety of artefacts amassed from places as far and wide as Japan, India and Macau, where Portugal’s striking green and red flag was still flying until as recently as 1999.

A large section devoted to Portugal’s successive maritime feats chronicles the development of ship-building from the mid-15th century onwards. Replicas illustrate in fine detail the gradual transition from the basic ships used in the earliest explorations to the innovative square-rigged caravels that later traversed the world’s oceans.

Besides the museum’s remarkable collection of model ships, visitors to the Lisbon Maritime Museum (indicated on the Google map below) can marvel at the rare display of navigational instruments, astrolabes and maps depicting how the world appeared before and during Portugal’s golden Age of Discovery.

The collection also features replicas of the famous stone pillars known as padrões that the great pioneering navigators such as Bartomoleu Dias and Vasco da Gama erected as monumental markers at the site of each new territorial advancement.

Of special interest are the gilded state barges that reflect the pomp and splendour of the Portuguese kings and queens, most notably the Royal Quarters containing the lavishly-furnished cabin of King Carlos retrieved from the royal yacht, Amélia IV, which was built in Scotland in 1900 and eventually put out of commission by the Portuguese Navy in 1937.

A major highlight of the museum is the Sírius, a 29-metre-long galliot built for the royal marriage of Portugal’s King João VI and Princess Carlota Joaquina of Spain in 1785 with seats for no less than eighty oarsmen.

Another of the museum’s star attractions is the small Santa Clara seaplane in which the two intrepid Portuguese aviators – Gago Coutinho and Sacadura Cabral – courageously flew across the South Atlantic from Lisbon to Rio de Janeiro in 1922 to write their own very special record-breaking chapter in world history.

There’s much more to see in Belém besides the amazing Museu de Marinha, such as Jeróminos Monastery where the body of Portugal’s most famous explorer, Vasco da Gama, now rests opposite the country’s national poet, Luís de Camões. Next door is Portugal’s National Archaeological Museum, a vast treasure trove of ancient artefacts covering thousands of years of the country’s history.

Nestling on the north bank of the River Tagus, and just a short walk from the Maritime Museum, stands Lisbon’s most loveable landmark, the Tower of Belém, which has been welcoming home-sick sailors back to the Portuguese capital since the early 16th century. Close by, the eye-catching Monument to the Discoveries commemorates the country’s many seafaring successes with statues of the key figures involved.

And no visit to Belém is complete without a visit to the Antiga Confeitaria de Belém, home to the original and very tasty custard tarts known as pasteis de Belém, which are based on a secret recipe invented by monks living next door at Jerónimos Monastery in 1837.

Need more inspiration for your next visit? Why not download the Portugal Travel Show, the podcast for people planning a trip to sunny Portugal…