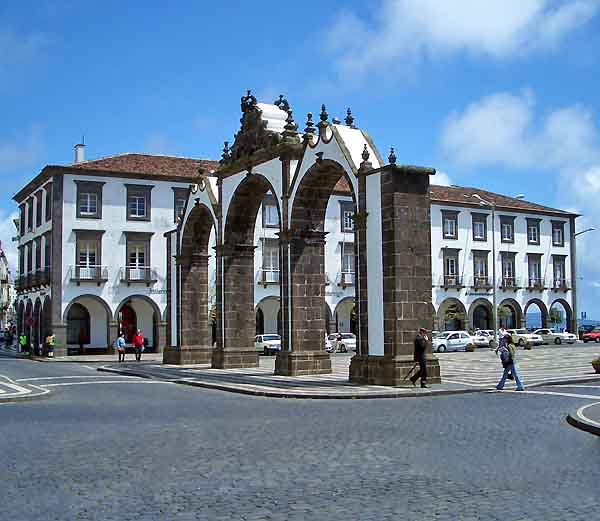 The largest place in the archipelago and capital of both São Miguel Island and the Azores since 1522, Ponta Delgada is a charming city stretched out along a wide bay on the island’s south coast.

With many impressive churches, convents and striking white houses, visitors are constantly reminded of its wealthy and illustrious past when the port was a crucial staging post between Europe and the New World during the Age of Discovery in the 15th and 16th centuries when Portugal was a major world power.

Founded in 1533, the parish church of São Sebastião is notable for its Manueline façade and two outstanding Baroque doorways, as well as an impressive high altar of carved cedar wood.

Occupying the former monastery of Santo André, the Carlos Machado Museum portrays the development of the region’s fishing and farming industries over the centuries.

Ponta Delgada is within easy reach of the extraordinary crater lakes and thermal springs located in the centre of the island. A short drive north-west of the city is the spectacular setting of Caldeira das Sete Cidades, an extinct volcano with two adjoining lakes, one emerald-green and the other sapphire-blue.

On the east side of São Miguel island and reachable from the capital lies the spa resort of Furnas. Alive with steam vents, thermal pools, hot springs and boiling mud, Furnas is the best place to witness the geothermal activity taking place beneath the surface of the Azores.