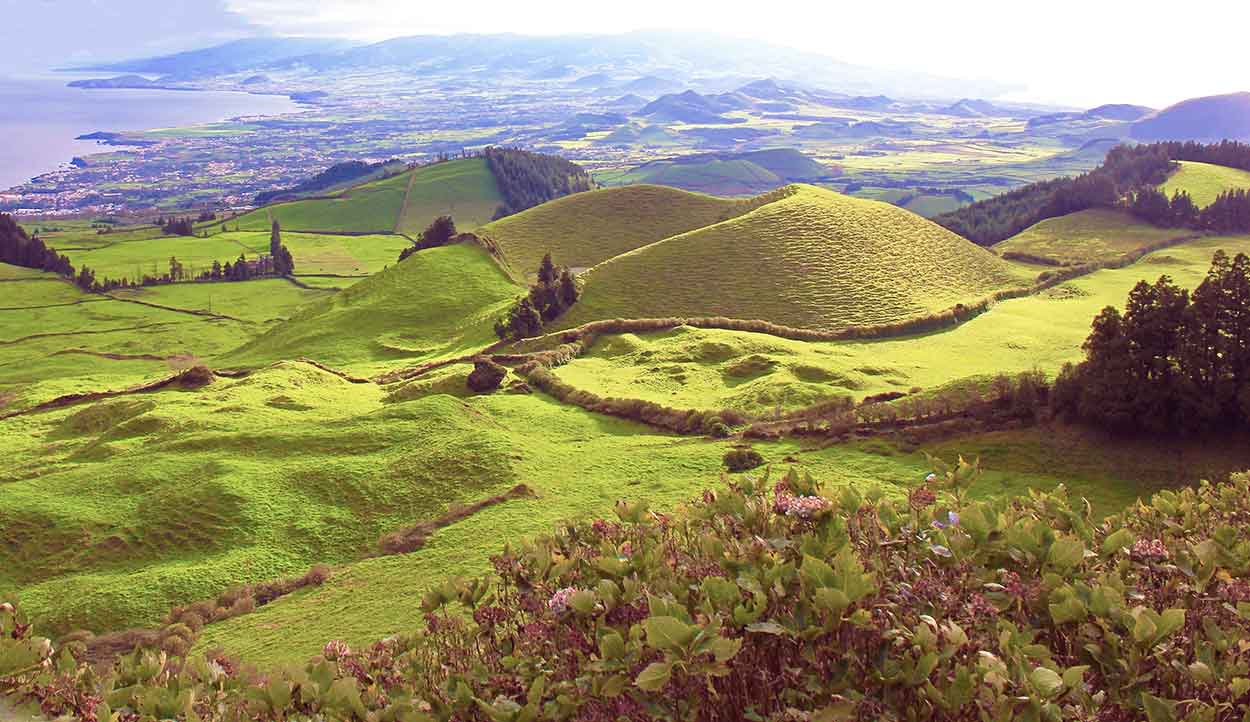 Known as the Green Island (Ilha Verde), São Miguel is the largest and most developed of the Azores, Portugal’s verdant nine-island archipelago in the mid-Atlantic.

Just 62km (38 miles) long and 16km (10 miles) wide, it is the perfect place for a relaxing road-trip across the island’s dramatic volcanic landscape, stopping at some of the small farms and villages en route to take photos and perhaps pick up some of the best freshly-made dairy products money can buy.

Distinguished principally by its remarkable abundance of vegetation, São Miguel was discovered by the intrepid Portuguese navigator Gonçalo Velho Cabral in 1427, with the island’s settlement beginning with groups from the mainland a couple of years later.

Formed from the emergence of two volcanic massifs bursting from the ocean floor some four million years ago, the island (along with much of the Azores archipelago) is still alive with steam vents, hot springs, thermal pools and boiling mud, most notably in and around the eastern spa town of Furnas.

Along with its thriving tea plantations and extensive pineapple crops grown under glass, the development of farming and stock breeding has helped make São Miguel one of the most prosperous of all the Atlantic islands.

Bright and airy, its majestic capital Ponta Delgada is stretched out along a lovely bay on the island’s idyllic south-west coast. The city has many interesting churches to explore, most notably the Igreja Matriz de São Sebastião that was built in the 16th century and features a fine Manueline façade and an old high altar of carved cedar.

Occupying the 16th-century covent and church of São André, Ponta Delgada’s excellent Carlos Machado Museum portrays the enormous interest shown in São Miguel Island by naturalists over the centuries through its extensive natural history section, in addition to some very impressive collections of paintings, sculptures and many rare pieces of sacred art.

One of the most photographed of all São Miguel’s natural attractions is Sete Cidades, a picture-book twin-lake setting tucked away in the island’s verdant north-western corner. Set in the crater of an extinct volcano, it is best viewed from the King’s Belvedere (Vista do Rei), which outranks the vast majority of southern Europe’s most glorious vistas.

Another of São Miguel’s most celebrated beauty spots is Furnas, a spa destination par excellence located on the other side of the island, where steaming geysers and hot bubbling springs provide the therapeutic mud and mineral water used for the local treatments and therapies.

Continuing east from Furnas brings you to Nordeste, a remote town located at the north-eastern tip of the island. This peaceful place is surrounded by lush, green vegetation and the ocean views are spectacular from the nearby Serra da Tronqueira.

On the way back to Ponta Delgada, don’t miss out on the chance to visit Vila Franca do Campo, a charming seaside town midway along the island’s south coast. Once the capital of São Miguel, its delightful 15th-century church of São Miguel boasts an impressive Gothic portal and the oldest bell on the island.