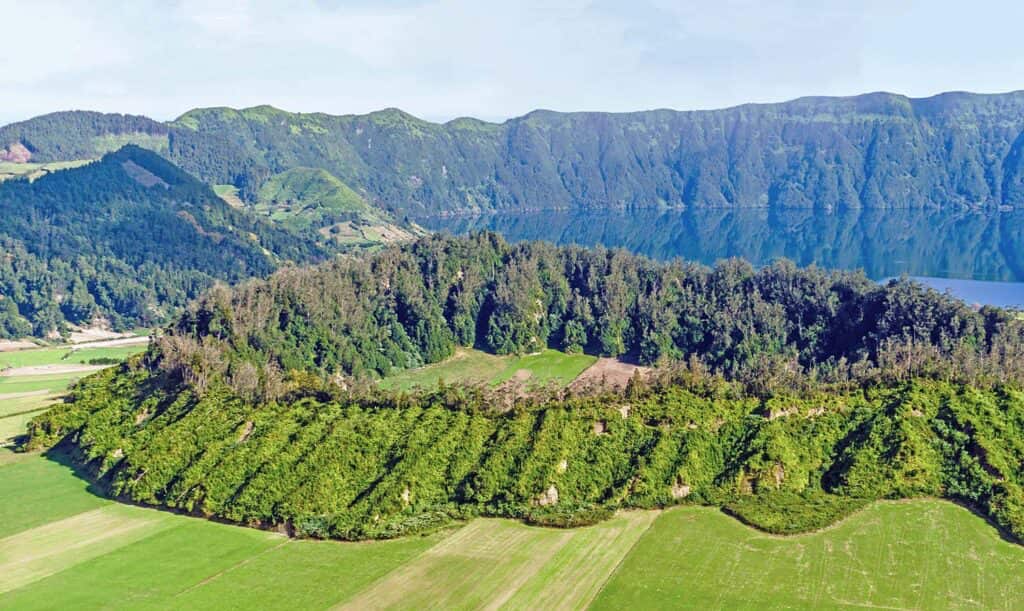 The Azores are striking for their verdant volcanic landscapes

With its deep valleys, stunning crater lakes, hot volcanic springs and lush green vistas, the Azores is an island destination like no other.

Stretched across 600 kilometres in the middle of the North Atlantic, this enchanting nine-island archipelago is popular for its temperate climate, natural wonders and rich profusion of wild flowers.

São Miguel, the largest landmass of them all, isn’t called the ilha verde (green island) for nothing. Its annual harvest of bananas, oranges, sugar cane, tea, tobacco, grapes and pineapples are a good indication of a verdant landscape blessed with many iconic attractions, such as the twin-lake setting of Sete Cidades in the north-west and the lovely spa town of Furnas to the east. Equally enchanting is Lagoa do Fogo, a shimmering lake framed by high mountains in the centre of the island.

Ponta Delgada (indicated on the Google map below), the pleasant capital of both São Miguel and the whole of the Azores, is a bright, airy city set around a wide bay and natural harbour. The city’s key tourist highlights include a delightful historic centre and 16th-century parish church. Don’t miss the Gruta do Carvão, an ancient 1,650-metre-long lava tube located deep underground just north of the city centre.

The neighbouring island of Santa Maria was the first to be officially discovered by Portuguese navigators in 1427. Nestling on a hillside on the island’s south-western shoreline, the capital Vila do Porto was the first town in the Azores to be granted its charter in 1470. Must-see attractions on Santa Maria include Pico Alto (the island’s highest point), the striking scenery around the bay of São Lourenço and the little chapel of Anjos where Columbus and his crew prayed on their way back from America.

Aptly named, Terceira (meaning ‘third’) was not only the third island to be discovered but is the third-largest in the archipelago. Its capital, Angra do Heroísmo, is an enchanting city suitably classified by UNESCO as a World Heritage Site in 1983 on account of its architectural and historical significance. Terceira Island’s other key attractions are the natural swimming pools of Biscoitos, the deep caves of Algar do Carvão and the fumaroles at nearby Furnas do Enxofre.

Pico Island is largely synonymous with its huge dormant volcano, which at 2,351 metres is the highest mountain in the whole of Portugal. Its capital, Madalena, gives good access to the island’s old vineyards that date right back to the 15th century and are now a UNESCO World Heritage Site. Other places worth visiting are the town of Lajes do Pico, a popular whale-watching centre with an excellent eco-museum dedicated to the history of whaling in and around the Azores.

West of Pico lies Faial, arguably the most nautical of all the islands having been a regular stopover for yachts and other seafaring vessels for centuries. Set around a wide, sheltered bay, its cosmopolitan capital, Horta, is home to a scrimshaw museum (one of the few in the world) and several old churches. Visit the volcanology centre at Capelinhos on the other side of the island for a fascinating portrayal (and daunting reminder) of the region’s volatile history.

Located to the north-east of both Pico and Faial, and blessed with with an intrinsically rural charm, São Jorge is one of the most fertile and best-cultivated islands in the Azores. Savoured throughout the world, its famous cheese – Queijo São Jorge (often simply referred to as queijo da ilha) – is made all over the island in factories open to visitors. 10 km east of the capital Velas, visitors can head-spinning Atlantic views from the 1,053-metre-high Pico da Esperança (a mountain peak at the centre of the island), among the best in the Azores.

Due north of São Jorge lies Graciosa (meaning ‘gracious’), which takes its name from the lovely vegetation covering the whole of the island. Dotted with windmills, waterfalls and wild flowers, its countryside is well-tended with fertile pastures and a pocket of vineyards that produce the island’s popular verdelho wine. Its capital, Santa Cruz da Graciosa, is a picturesque town of bright white houses and handsome churches.

The most westerly point of both Portugal and Europe is marked by Flores Island, a mass of green meadows interspersed with lakes, deep valleys and gushing waterfalls. The capital, Santa Cruz, is a small seaside town with several small 18th-century churches and a fine ethnographical museum set in a former monastery. For the ultimate selfie and most exhilarating ocean vistas, take a walk down the island’s west coast to Fajã Grande to be able to brag to your friends that you’ve been to the westernmost place in Europe.

Last but certainly not least, Corvo might be the smallest island in the archipelago but it makes up for it in breathtaking scenic beauty. The island’s main attraction is its extinct volcano, Caldeirão, featuring a large crater lake with its own nine islands, a symbolic representation of the Azores themselves. The only urban centre on the island is Vila do Corvo, a small seaside town with a lovely old parish church, the origins of which date back to the 16th century.