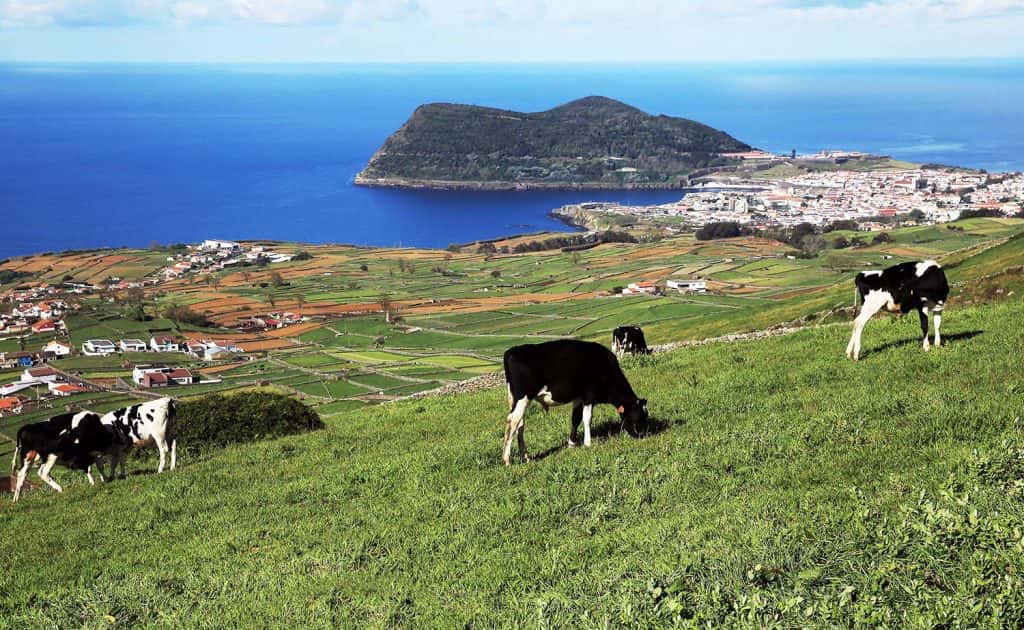 Green and peaceful, Terceira is the third-largest island in the Azores

Blessed with a bucolic landscape of lush meadows and emerald-green pastures divided by walls of volcanic rock, Terceira was the third island of the Azores to be discovered (its name means ‘third’ in Portuguese) and coincidentally, is the third-largest in the archipelago after São Miguel and Pico.

The most easterly of the five islands that make up the central group, this peaceful, oval-shaped mid-Atlantic hideaway features a verdant interior of forested hills and well-tended farmland stretching as far as the eye can see.

A number of large volcanic massifs dominate the scenery with their huge rims manifesting themselves as extended mountain ridges known as serras, the most prominent being the dormant, 1,021-metre Serra de Santa Bárbara which last erupted in 1762 and is the highest point on the island.

Covering a total area of some 400 square-kilometres, Terceira’s development began in the mid-15th century with the arrival of settlers from Flanders, Algarve and the Alentejo on the orders of Prince Henry the Navigator, the man who charted the island’s discovery for Portugal.

From the very start, the island played a pivotal role during Portugal’s golden Age of Discovery in the 15th and 16th centuries thanks to its safe, sheltered harbours, and it became a favourite port of call for ships returning from the New World and beyond. It was also the place where the great explorer, Vasco da Gama, buried his brother Paulo in 1499 on the way back from his pioneering sea voyage to India.

A city of great cultural and monumental value, the island’s capital, Angra do Heroísmo, was added to the coveted UNESCO World Heritage list in 1983 due to its immense architectural and historical significance. Retaining its original layout of old cobblestone streets lined with whitewashed stone buildings topped with terracotta tile roofs, it prospered greatly from the 16th to the 18th centuries when it was embellished with many beautiful churches, stately mansions and lavish governmental buildings.

Angra do Heroísmo was the first settlement in the whole of the Azores to be granted its town charter in 1534, and it was subsequently chosen as the seat of the bishopric of the Azores by Pope Paul III that same year, which it still retains today.

The city’s top attraction is its 16th-century Sé Cathedral built on the site of a 15th-century church. Inside, there is some fine carved wooden vaulting and a beautiful silver altarpiece in the chancel. Of equal interest is the Angra Museum housed in the magnificent convent of São Francisco, the best on the island featuring a vast collection of weapons, musical instruments, porcelain and paintings.

Incorporating the cathedral, the best view of Angra do Heroísmo is from Monte Brasil, a prominently-situated volcanic crater on the western side of the bay where an an obelisk commemorates the visit of King Pedro IV during the Civil War. At the foot of Monte Brasil stands the fortress of São João Baptista, one of the largest examples of military architecture from 16th- and 17th-century Europe.

Terceira’s second-largest town, Praia da Vitória, is set around a large bay with a fine, sandy beach. Popular for its attractive main square and long pedestrianised shopping street, its main cultural sight is the church of Santa Cruz founded by one of the island’s first settlers, Jacques de Bruges, and featuring an elaborate 15th-century Gothic portal and a richly ornate interior.

On the island’s rugged north coast, Biscoitos is worth visiting for its natural swimming pools produced by unusual formations of black volcanic rock created during an eruption in 1761. It is also notable for its fine wines which, along with those of Pico Island, are starting to regain some of the popularity they enjoyed in the 19th century.

Another must-see attraction on Terceira Island (indicated on the Google map below) is the immense subterranean beauty of Algar do Carvão, the result of a powerful volcanic eruption some 2,000 years ago that produced large caves brimming with stalactites and stalagmites, in combination with the steam vents known as Furnas do Enxofre nearby.