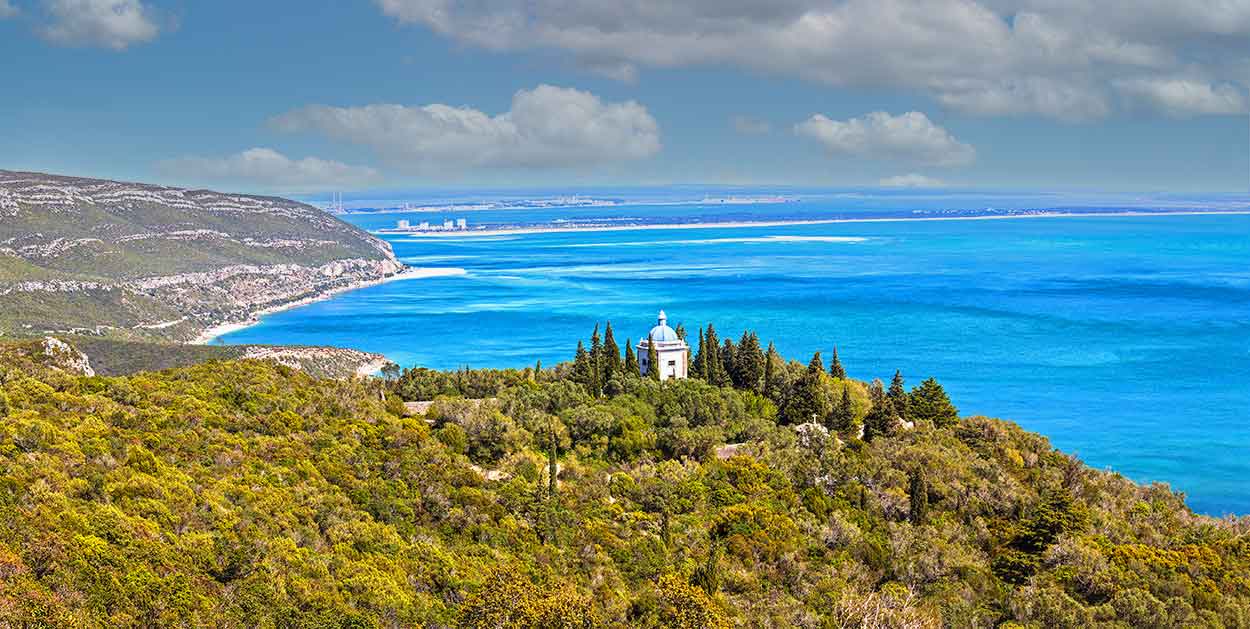 Conveniently located just to the south of Lisbon, the enchanting Setúbal Peninsula (aka the Costa Azul, or Blue Coast) exudes much of the rare authenticity that still abounds in the more rural parts of 21st-century Portugal.

It’s a place where villagers have managed to preserve some of their traditional maritime lifestyle and where seasoned fishermen can be seen busily mending their nets beside uniquely-painted boats before embarking on yet another seafaring venture.

Encompassing a scattering of large towns dotted amongst hundreds of thousands of hectares of environmentally-protected landscape, the Costa Azul is the perfect place to wind down, relax and reflect after a few days’ hectic sightseeing in the Portuguese capital.

A major draw for beach-goers from all over the world is the Costa da Caparica, a gorgeous stretch of golden, sandy shoreline beginning on the south bank of the Tagus Estuary and continuing south for over 30 kilometres, making it one of the longest in the whole of southern Europe.

Setúbal, the beating heart of the region, offers visitors the pleasure of exploring a lovely historic centre and several fine churches, most notably the magnificent Convento de Jesus, famous for its extraordinary twisted columns.

Setúbal was also the birthplace of Manuel Maria Barbosa l’Hedois du Bocage, arguably the greatest of all the Portuguese poets after Luís de Camões, and few people can resist taking a selfie next to the imposing statue of the great man in the city’s main square.

Rising to the west of Setúbal lies the 10,000-hectare mountain and coastal reserve known as the Parque Natural da Arrábida (Arrábida Natural Park), a fiercely protected area due to its star attraction, a large expanse of ancient Mediterranean vegetation, a very unusual natural feature to find in an Atlantic region.

If you have time on your hands, you will definitely enjoy a leisurely dip in the cool, translucent waters of Portinho da Arrábida, once voted the best beach in the whole of the country by the Portuguese people themselves.

Close by lies Sesimbra (indicated on the Google map below), the archetypal Portuguese resort town nestling on an idyllic bay surrounded by mountains and overlooked by a medieval castle. Besides its long sandy beach, it is a very popular place for al fresco dining in the many fish and seafood restaurants that line the town’s seaside promenade.

Wine lovers won’t want to miss the chance of dropping in on a vineyard or two in Azeitão, a charming old town situated on the slopes of the Arrábida Mountains. Here they produce high-quality muscatel wine and some excellent reds, along with one of the creamiest, tastiest cheeses in Portugal.

Now a protected area, the Sado river estuary is a major tourist destination for one specific reason – the large pod of bottlenose dolphins that inhabit the local waters, one of the few resident populations in Europe and the only one in Portugal. They are most playful and extremely friendly and can be seen up very close from one of the many leisure cruises that regularly depart from Setúbal and Tróia.

The Tróia Peninsula is another glittering jewel in the Blue Coast’s lavish crown. This narrow spit of pristine sand jutting out into the Sado Estuary is a fabulous beach destination with lots of added tourist appeal, such as the Roman city of Cetóbriga, a casino, modern marina and several upmarket hotels and restaurants.

Other places well worth visiting in the Costa Azul include Palmela (an old town topped by an impressive castle), Cabo Espichel (an important religious sanctuary) and the 16th-century Convento da Arrábida which guarantees its visitors the most spectacular views of Tróia and the surrounding Atlantic Ocean.