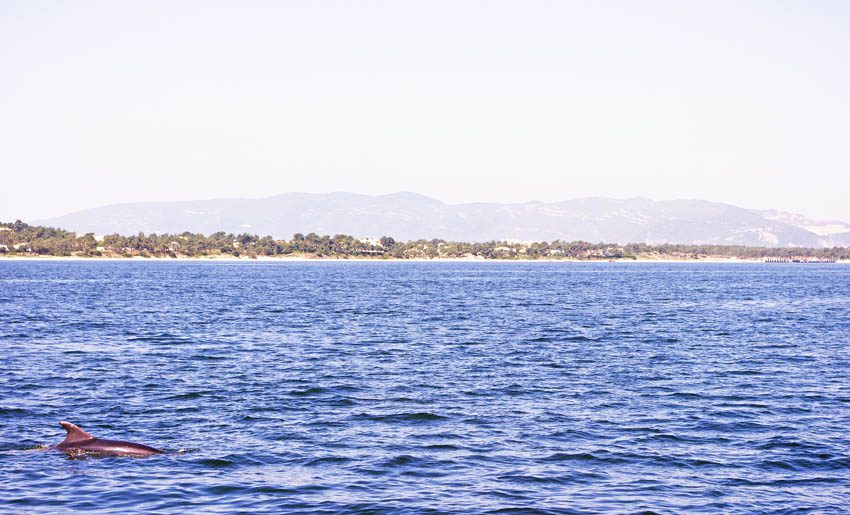 It’s extremely rare to catch sight of a large pod of bottlenose dolphins in European waters, but happily a family of three dozen or so are a regular attraction in the Sado Estuary south of Lisbon.

Each named and monitored very closely, their diet consists mainly of squid, shrimp and a great variety of fish including mullet, mackerel, sardines, anchovies and eels.

They can reach speeds of almost 30 kph and only need to come up for air once every two or three minutes. Mature adults can reach four metres in length, with a weight of up to 300 kilograms.

Occasionally they can be spotted from the shore, their charcoal-grey dorsal fins visibly scything the surface of the water. Official tour boats operate in the area for those wishing to get a closer look.

Besides having the chance to see the famous dolphins, visitors to the Sado Estuary find themselves in the heart of muscatel wine country, which is produced in great quantities throughout the Setúbal Peninsula.

Other regional specialities include the rich, creamy Azeitão cheese made with ewe’s milk and the locally-caught swordfish (espadarte).

Still referred to with much affection as the Costa Azul (Blue Coast), the area also boasts some of the best beaches in the region, most notably Portinho da Arrábida set in the shadow of the Arrábida mountains and Tróia, south of the River Sado and easily reachable by ferry.