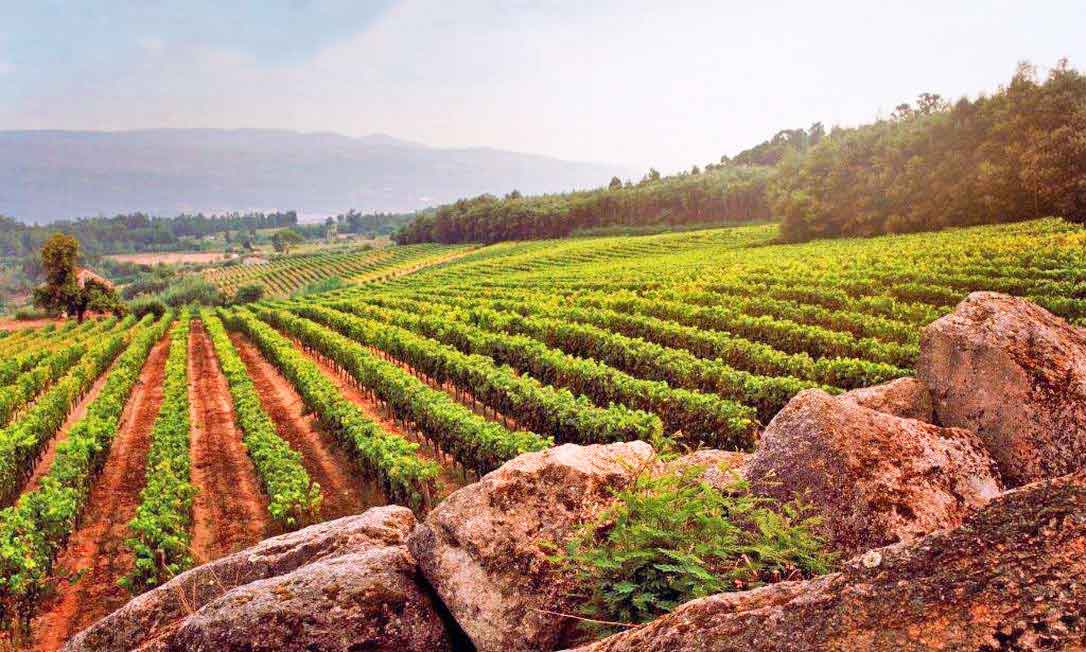 Dão wines are amongst the best in Portugal

Encircled by imposing mountains, the enchanting Dão wine-making region is a land of sprawling pine and eucalyptus forests stretched right across the northern parts of central Portugal between Aveiro on the Atlantic coast and Guarda near the Spanish border.

Forming a soaring backdrop to the east and south, the Serra da Estrela mountain range is very much the heart of both Portugal and the Dão wine region, with many of the best vineyards laid out like lush green carpets along its verdant foothills.

The name derives from a river which seasonally cuts a narrow gorge through the granite hills of central Portugal and today the demarcated Dão wine region produces some of the country’s most popular table wines.

Dão has many advantages where grape-growing is concerned due to its excellent mix of climate and geology, along with many other favourable conditions. Good soil is one of the key reasons for its success with much of the terrain being of mostly degraded granite, which provides Dão wines with plenty of mineral quality and brightness of taste.

Likewise, night-time temperatures in the Dão region are cooler than some other parts of Portugal, which allows the grapes to maintain their aroma and guards against over-ripening.

The soil is mainly granite in the hillier north-east where the sloping vineyards produce fuller, richer reds than the sandier soils of the more central and western parts of the area. Sheltered by mountains, the Dão wine region generally enjoys an extended period of hot, dry weather in summer with plenty of rain in spring, autumn and winter.

Dão wines are based on a variety of grapes, but for reds one of the most prominent is Touriga Nacional which maintains its acidity and all its fruity, flowery aromas with hints of damson, raspberry, blackcurrant and strawberry.

Other prominent Dão grapes are Tinto Roriz (known as Tempranillo in neighbouring Spain) which produces a lively, firm and very flavoursome red, Alfrocheiro (fruity and soft) and Jaen (Spain’s Mencia), a grape that thrives in the cooler, more mountainous parts of central Portugal.

Dão is also one of the best places in Portugal for fine whites, mostly made from a local grape called Encruzado that provides much of the wine’s flowery citrus flavours, along with Arinto, Malvasia, Fina, Verdelho and Bical.

Full of fruity flavour, Dão wines are among the most diverse and well-balanced in Portugal and feature prominently on restaurant wine lists all over the country and beyond.

Travelling through Portugal’s demarcated Dão wine region is an absolute delight with many narrow roads twisting through the fertile vineyards and forests that link dozens of attractive little towns and villages made from the local granite.

There are many interesting places to visit in Dão country, most notably Viseu (indicated on the Google map below), a magnificent city famous for its twin-towered 13th-century cathedral and the amazing Grão Vasco Museum next door.

Another popular stopover for people exploring the Dão wine-making area is Buçaco Forest where Napoleon’s forces led by Marshal Masséna were defeated by the great British general Sir Arthur Wellesley during the Battle of Buçaco in 1810.

Visitors who enjoy relaxing in thermal spas should head for the little town of Luso just 3 km from the northern tip of Buçaco Forest where the curative properties of its mineral waters have been popular for centuries.