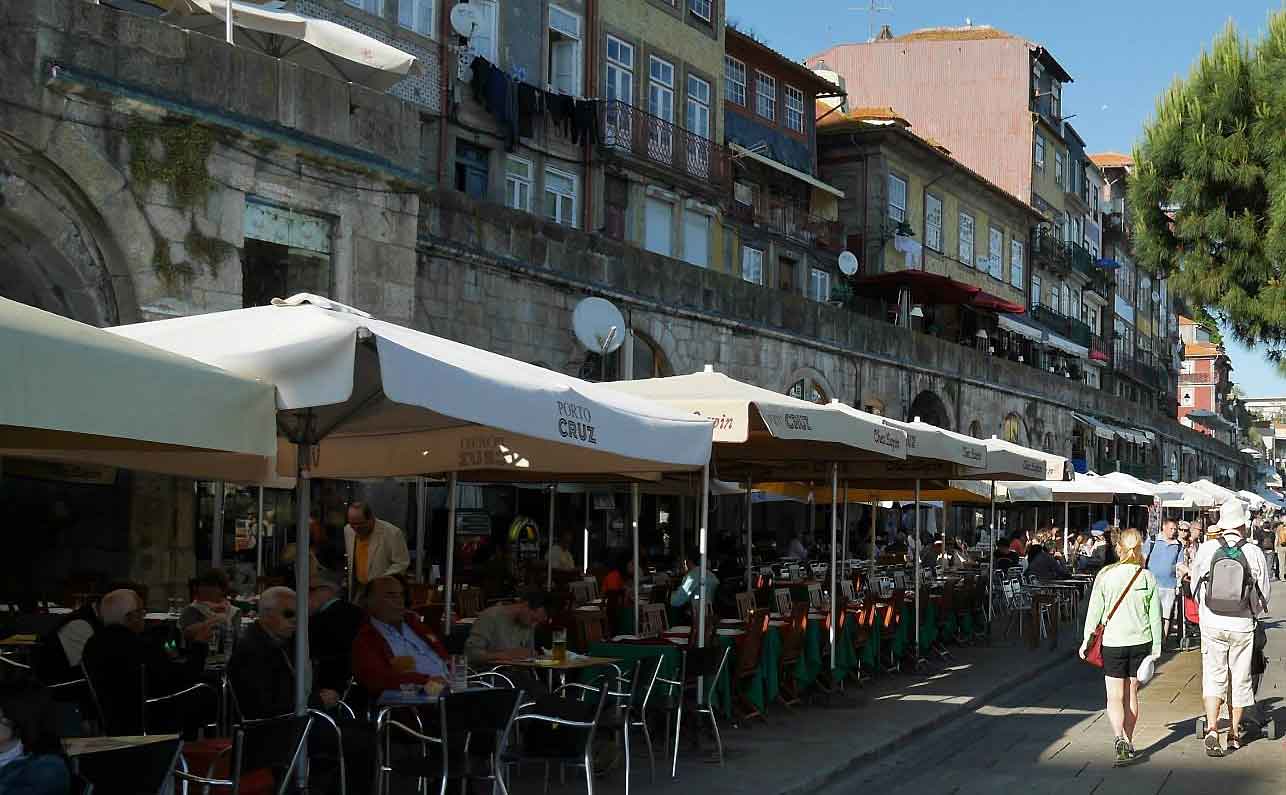 Despite its steep hills, Porto is certainly a city made for walking with a number of interesting routes available for visitors looking to soak up the city’s medieval atmosphere at their own pace.

The Ribeira (Porto’s ancient riverside district) is a place to linger and admire the stunning setting of the River Douro, dominated by Eiffel’s magnificent two-tiered Dom Luís I Bridge built in 1866.

As you saunter along the quayside, you’ll feel a strong sense of the city’s (and Portugal’s) long and chequered history, which began when Portus merged with neighbouring Cale to form ‘Portucale’ more than two thousand years ago.

The centre of Porto is a visual thrill and the best place to start exploring the city on foot is in the Old Town, an atmospheric medieval quarter with many sections of the original Walls of Dom Fernando dating back to the 14th century.

The first port of call for many visitors is Porto’s Sé Cathedral, an imposing Romanesque building that was founded in the 12th century. Its grand interior witnessed the marriage of King João I to Philippa of Lancaster in 1387 to form the Anglo-Portuguese Alliance, the oldest treaty still active in the world today.

Descending the cathedral’s steps, one finds oneself in Terreiro da Sé, the spot where the Bishop of Porto persuaded a group of English, Flemish and German crusaders (who had anchored in the River Douro en route for the Holy Land) to help Portugal’s first king, Afonso Henriques, capture Lisbon from the Moors in 1147.

In addition, few people can resist the temptation of crossing the Douro by means of the mighty Dom Luís I Bridge to Vila Nova de Gaia where the world-famous port wine lodges can be visited.

The parapet in front of the round church of the Serra de Pilar Monastery nearby on the same side of the river provides an excellent vantage point from which to appreciate Porto’s stunning cityscape from a different perspective.

Another popular walking route begins at the iconic Clérigos Church & Tower which affords unrivalled vistas over Porto’s ancient city centre. From here, head down Rua dos Clérigos towards São Bento railway station where you can marvel at the magnificent azulejo tiles lining the walls of the main hall.

Across the road from the station you’ll find Rua das Flores, an enchanting street lined with many old cafés and shops selling antiques and second-hand books. Towards the end of this long, narrow street you’ll find Nasoni’s Baroque masterpiece, the exquisite church of the Misericórdia built in 1559.

Crossing Largo São Domingos to Rua Ferreira Borges brings you to the neoclassical Palácio da Bolsa, an impressive mid-19th century building most notable for its Arab Hall, which is particularly reminiscent of the great hall of the Alhambra in Granada.

Next door lies the magnificent church of São Francisco, one of the most precious jewels in Porto’s glittering tourism crown. This fine piece of ecclesiastical architecture was commissioned by the Franciscan monks in 1383 and must be seen for its gilded wood-carvings inside.

Heading up Rua Infante Dom Henrique and turning right into Rua da Alfândega brings you to the 14th-century Casa do Infante (indicated on the Google map below), birthplace of Porto’s most famous son, Henry the Navigator, and now a fascinating museum.

This leads you back into the remarkable Ribeira district, an integral part of Porto’s ‘outstanding urban landscape with a 2,000-year history’, as described by UNESCO when the city’s entire historic centre was included on the list of Portugal’s World Heritage Sites in 1996.