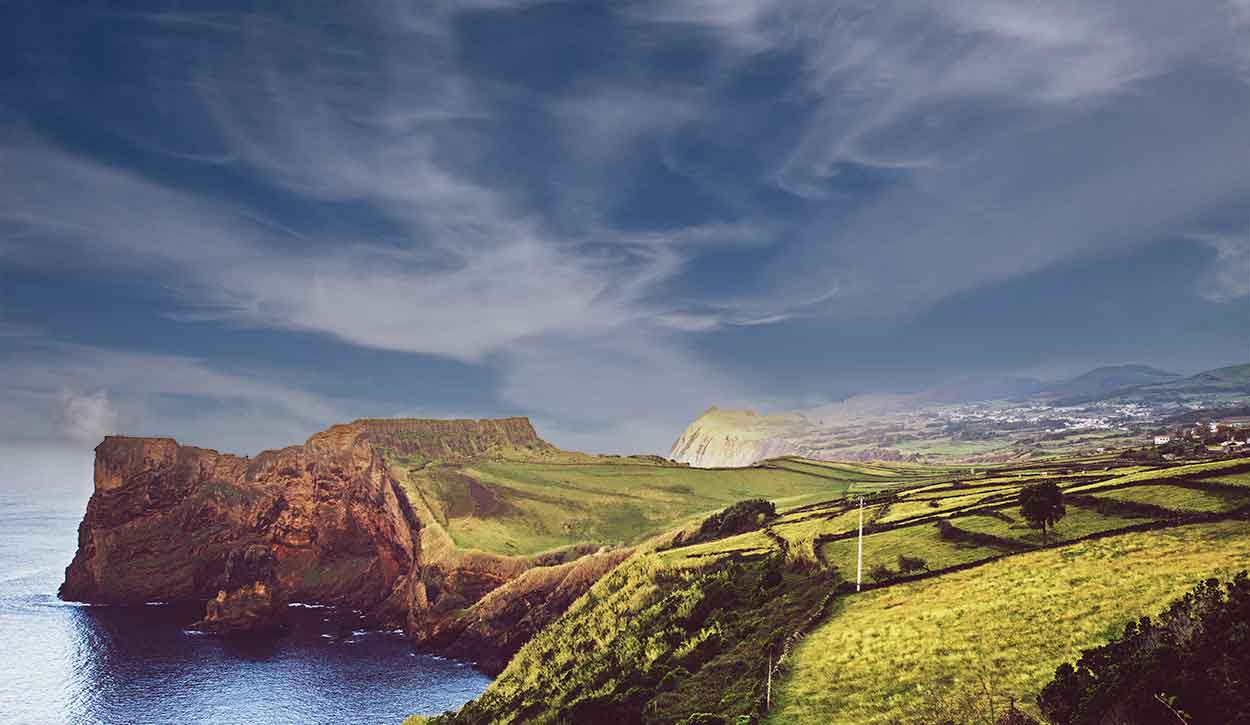 Long and narrow, the verdant island of São Jorge is a place of immense scenic splendour and outstanding natural beauty right in the middle of the Azores archipelago.

Just 55km long and 8km wide, it has a delightfully fresh and rural charm with many of its 10,000 or so inhabitants engaged in local fishing and agricultural activities.

Fertile and carefully cultivated, the island consists of a single volcanic ridge covered in lush green forest. Stretched out parallel to Pico, visitors can enjoy stunning views of the neighbouring island’s imposing 2,351-metre-high mountain (the highest in Portugal) on clear days.

With pastures covering much of the central plateau, São Jorge’s lowlands were first settled in the middle of the 15th century, and today the island is popular for its rich dairy products, especially the tasty cheddar-like cheese (queijo de São Jorge) which is savoured the world over.

São Jorge’s scenery is truly memorable and encompasses not only magnificently broad vistas but also an abundance of blue and purple hydrangeas lining the roads in spring and summer.

The island also features several protected areas, including the beautiful lagoon of the Caldera do Santo Cristo and the small Ilhéu do Topo just off the village of the same name where very large numbers of seabirds congregate.

Nestling idyllically on the slopes of a hill on the picturesque south-west coast, Velas (São Jorge’s charming capital) is the island’s most sizeable town. It has many well-preserved old buildings to see in the centre, such as the Igreja de São Jorge (parish church) originally founded in the 15th century by Prince henry the Navigator.

A stately edifice built in the 18th century, Velas Town Hall (known locally as the Paços do Concelho) is equally notable for its striking Baroque features and twisted columns either side of its doorway.

Manadas (a small village a couple of kilometres south-east of Velas) is worth visiting for its fine church, the Igreja de Santa Bárbara, which is one of the loveliest in the whole of the Azores. The interior’s highlights include a splendid cedar-wood ceiling adorned with rare paintings sculptures and a series of azulejo tiles illustrating the amazing story of Saint Barbara.

A little further to the south-east lies Calheta, a pleasant seaside town with a first-class museum dedicated to the talented musician, composer and conductor, Francisco de Lacerda, who was born on the island in 1869.

Rising to a heady height of 1,053 metres, Pico da Esperança in the centre of the island affords breathtaking views of the surrounding islands of Pico, Faial, Terceira and Graciosa. There have been two major eruptions on São Jorge in the past 500 years, the first happening in 1580 and the second in 1808.

The country road running north-west from Velas to Ponta dos Rosais offers one of the most exhilarating drives on the island, with breathtaking sea views across the water to Pico and Faial when the weather is fine.

Other places of interest on the captivating island of São Jorge (indicated on the Google map below) include Sete Fontes Forest Park (popular for its lovely picnic area set in the shadow of Pico da Velha mountain), Ribeira do Nabo (home to one of the best handicraft centres on the island) and Urzelina, a village mostly famous for its church tower buried by molten lava during the great volcanic eruption of 1808.