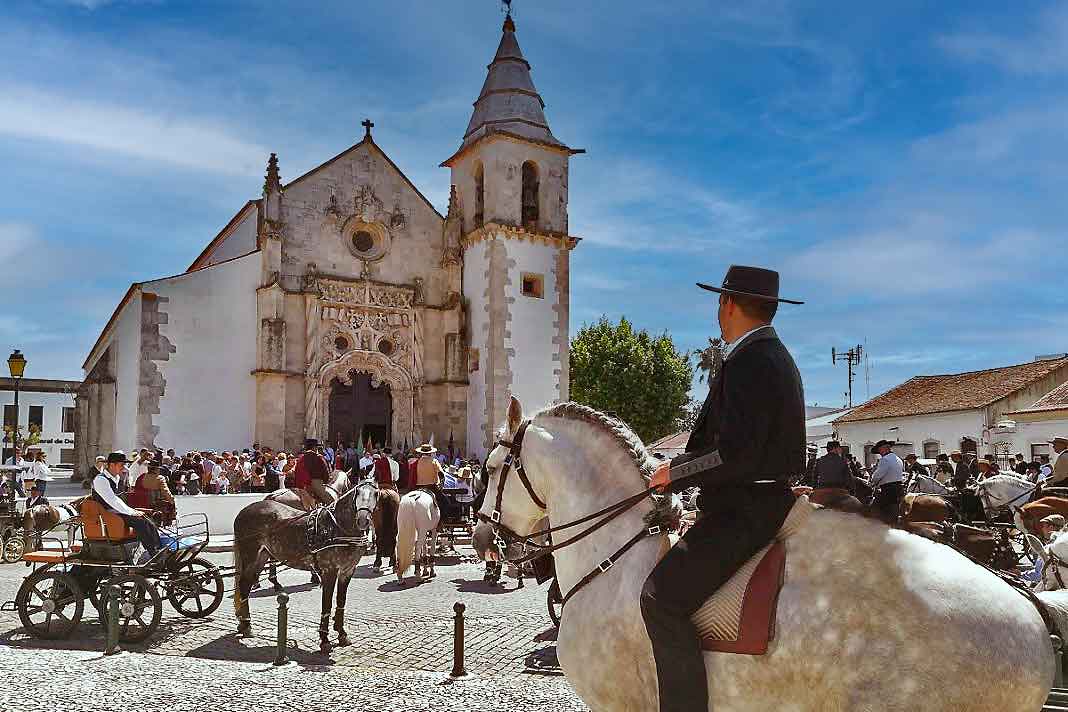 Located in the heart of the Ribatejo, one of the flattest and most extensive regions in Portugal, Golegã is a charming town in the centre of the country with a great horse-breeding and agricultural tradition.

Considered the equestrian capital of Portugal, it is best known for its annual horse fair – the Feira Nacional do Cavalo – which runs for ten days at venues all over the town from early to mid November.

All the top breeders attend this important event, the origins of which date back to the 18th century, with many of Portugal’s most refined breeds (such as the Lusitano, Sorraia, Alter Real, Garrano and Terceira) competing in all kinds of events, including exciting carriage races.

Some of the horses are paraded around the centre of Golegã by campinos, the iconic regional herdsmen dressed in the traditional Ribatejo-style attire of red waistcoats, green stocking caps, tight breeches and bright white stockings.

Another of the town’s star attractions is its delightful parish church, the Igreja Matriz, which was originally founded by King Manuel I and features a handsome 16th-century Manueline façade, one of the most impressive in central Portugal.

Located on Largo da Imaculada Conceição in the heart of the town centre, this magnificent church was designed by Diogo Boytac, the architectural genius behind the magnificent monasteries of Batalha near Fátima and Jerónimos in Lisbon.

Its façade features all the characteristic ornaments of the Manueline period, including two striking armillary spheres and long pieces of carved stone rope ‘tied’ around its tower and chancel.

Nearby lies another of the town’s key sights, the excellent Martins Correia Museum which is housed on two floors in the town’s former prison building. Born in Golegã in 1910, Martins Correia was a renowned expressionist Portuguese artist and this impressive collection includes more than 600 of his best paintings, sculptures, drawings and engravings.

Not far away, the elegant Victorian home of the former Portuguese statesman and renowned amateur photographer Carlos Relvas is now a museum where the bulk of his work and equipment can be seen and admired by visitors, including many rare photographs of Lisbon taken in the late-19th century.

Located 5 km west of Golegã, just off the road to Azinhaga, lies the Reserva Natural do Paúl do Boquilobo, a large protected area classified by UNESCO as a Biosphere Reserve (the first of its kind in Portugal).

Home to many bird species, most notably herons, this pristine natural reserve consists of a freshwater wetland surrounded by marshes on a bend of the River Almonda. For many years it has acted as a valuable deposit for alluvial particles carried in by the River Tagus to form rich cultivated areas that in turn have greatly contributed to Golegã’s economic prosperity.

There’s plenty more to see and do in this part of Portugal, including Tomar, an important and very historic town that’s home to the Convent of Christ, an ancient religious monument famous for its octagonal-shaped Charola where the Knights Templar would receive the priest’s blessing on horseback several centuries ago.

Just 15 km to the north-east of Golegã you will find one of the most picturesque castle settings in the whole of Europe, that of Almourol, a fairy-tale fortress perched on top of a rocky island in the middle of the River Tagus.

An easy half-hour drive to the north-west of Golegã takes you to Fátima, one of the world’s most important Catholic shrines. It was here in 1917 that three young shepherds were suddenly stopped in their tracks by the vision of the Virgin Mary above an old oak tree.

Not far from Fátima lie the amazing caves of Mira de Aire where visitors can descend more than 100 metres to a translucent lake, passing a series of well-preserved stalagmites and stalactites along the way.

Need more inspiration for your next visit? Listen to the Portugal Travel Show, the podcast for people planning a trip to sunny Portugal;