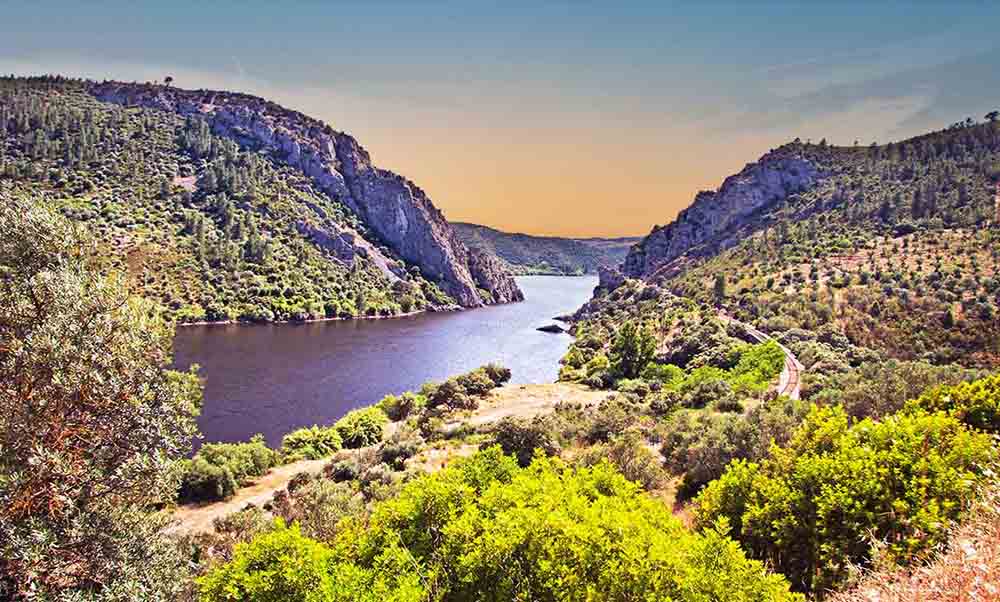 The longest of all Portugal’s rivers, the Tagus (Tejo in Portuguese) meanders across the Iberian Peninsula for just over 1,000 kilometres before spilling out into the Atlantic Ocean in Lisbon, right at the point where Portuguese caravels set sail on their many voyages of discovery hundreds of years ago.

Rising in the Montes Universales to the east of Madrid in the centre of Spain, it passes many picturesque towns en route to the Portuguese capital, including Abrantes, Constância, Santarém and Vila Franca de Xira.

When it reaches the Ribatejo, after a long and often turbulent journey across the harsh plateaus of Castile in neighbouring Spain and the rough ridges of central Portugal, it spreads out in the region’s vast plains before shifting its course in a south-westerly direction.

In winter, swollen by the mountain snows, it overflows and covers part of the Santarém basin, flooding large swathes of the surrounding countryside. In spring, the waters recede leaving a fertile sediment on its soft banks.

On reaching Lisbon, it opens out broadly in the form of a huge river basin around which much of the city’s commercial and agricultural activity exists. Its journey ends at the point where the open Atlantic thunders on to the vast, sandy sweep of Guincho Beach near the cosmopolitan resort town of Cascais.

Lisbon is dominated by the River Tagus; indeed, it was through its estuary that remarkable riches arrived from all parts of the world during the great Age of Discovery. Portugal and its people subsequently evolved into a great maritime nation through living on the banks of the River Tagus and by dreaming of what ground-breaking adventures might possibly lie ahead.

Its riverbanks were said to resemble a ‘forest of masts’ as early as the reign of King Dinis from 1279 to 1325. And by the reign of King Fernando I just 42 years later, Lisbon was a booming port city, a fact that prompted the chronicler Fernão Lopes to write that up to 450 ships could be seen moored in the Tagus at any one time.

The region of Portugal most synonymous with the river is the Ribatejo, whose name simply means Tagus Riverbank, where the land is rich in cereals and wheat grows in abundance. And if you’re passing through the Ribatejo by car, keep an eye out for the fairy-tale Castelo de Almourol (indicated on the Google map below) located right in the middle of the River Tagus, one of the most scenically-striking castles in Europe.

Visitors to Santarém can marvel at the view of the Tagus Valley from Portas do Sol which Francis Turner Palgrave described as ‘one of the great panoramic landscapes of Europe’ when visiting Portugal with his friend Lord Tennyson in 1859.

The flat alluvial plains and dried-out lagoons of the Tagus Valley are a paradise for bird-watchers who can spot many water birds there, such as the Kentish plover, pratincole, marsh harrier, purple heron and black-winged stilt.

Vila Franca de Xira to the north-east of Lisbon offers travellers the chance to walk, cycle or drive across the original 1951 bridge spanning the Tagus which, at 1,220 metres long, was the nearest river crossing to the capital until the Ponte 25 Abril suspension bridge opened in 1966.

The River Tagus has also been the scene of some important chapters in the country’s history, most notably the moment Afonso, Prince of Portugal and heir apparent to the throne, tragically died in a horse-riding accident on the riverbank in Santarém on the 13th of July 1491, aged just 16.

Lisbon’s great 25 April suspension bridge across the River Tagus was originally named the Ponte Salazar in honour of the country’s dictator who commissioned its construction in the early 1960s. Inspired by San Francisco’s Golden Gate Bridge, it stretches for 2.27 kilometres with six lanes of traffic and a railway line running underneath.

And one of the best places to appreciate the Tagus in all its glory is Praça do Comércio, central Lisbon’s popular riverside square. From there, you can absorb the immense sight of  its flashing waters stretching to the far limits of the horizon from a panoramic viewpoint that encompasses two of Portugal’s most iconic landmarks – the Cristo Rei statue and the aforementioned 25 April suspension bridge.