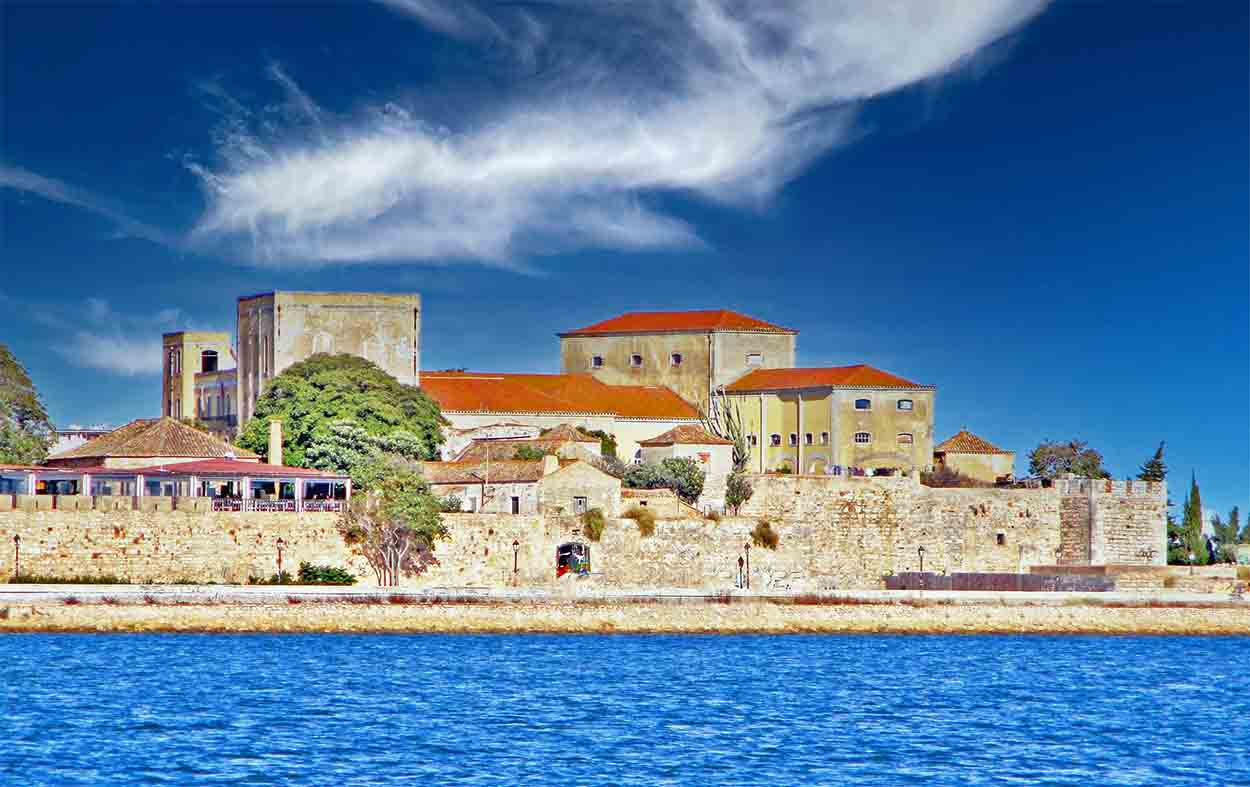 A few steps away from the city’s pedestrianised shopping areas, wide boulevards and urban parks, Faro’s original walls still stand proud, and within them lies a peaceful world of ancient stone buildings, many of which have been restored to their former glory.

The sturdy oval-shaped walls of Faro Castle were built by the Romans and many vestiges can still be admired today. The rest of the fortifications were added in the 16th century, with the exception of the two octagonal Byzantine towers which were constructed after the fall of the Roman Empire.

Faro’s Old Town (known locally as the Cidade Velha or Vila Adentro) is a very atmospheric medieval quarter that can be entered through one of three archways. Beyond the Jardim Manuel Bivar (an area of shaded gardens nestling alongside the city’s harbour), the Arco da Vila is arguably the most striking of them all.

Built in the eighteenth century by the Italian architect Francisco Xavier Fabri, this majestic city gate is topped by a bell tower (and often a stork’s nest!) with a niche featuring a white marble statue of St Thomas Aquinas. In the gate’s passageway visitors can also marvel at the sight of a horseshoe arch dating right back to the time of the Moors.

Following the old cobbled road (Rua do Município) up from the Arco da Vila brings you to Largo da Sé, a charming square lined with orange trees (that blossom to spectacular effect in March and April) and dominated by the city’s impressive cathedral plus a cluster of palatial buildings, including the Bishop’s Palace.

Built on the site of an old mosque following the Reconquest in 1251, Faro’s magnificent Sé Cathedral is blessed with a bold, basilica-like interior particularly notable for its 18th-century Baroque organ and wide nave flanked by exquisite azulejo tiles. Visitors who ascend the bell tower are rewarded with the most breathtaking views of the city’s old quarter, nearby wetlands and far beyond.

Another of Faro’s old gates – the Arco da Porta Nova (built in 1630) – leads directly through to the city’s waterfront area where boats depart for Ilha Derserta and the Ria Formosa Natural Park. And the third of the Cidade Velha’s three gates, the Arco do Repouso (meaning Gate of Rest), marks the spot where Portugal’s brave King Afonso III regained his strength after capturing Faro from the Moors in March 1249.

A short walk east of the cathedral brings you to Faro’s excellent Municipal Museum, which is installed inside the cloisters of the former convent of Nossa Senhora da Assunção. Highlights here include a giant Roman floor mosaic from 2 AD featuring the elderly sea-god, Oceanus, and a fine collection of Islamic pottery.

Built at the end of the 17th century, the nearby church of São Francisco is another must-see attraction in Faro’s historic centre (indicated on the Google map below). Once part of a Franciscan convent, the interior is well worth seeing for its lovely altarpiece in the chancel and the intricate carvings on the cupola. Look out for Marcello Leopardi’s ‘Death of Saint Francis’ painted in Rome in the 18th century, without doubt one of the most precious pieces of art in the whole of the Algarve region.