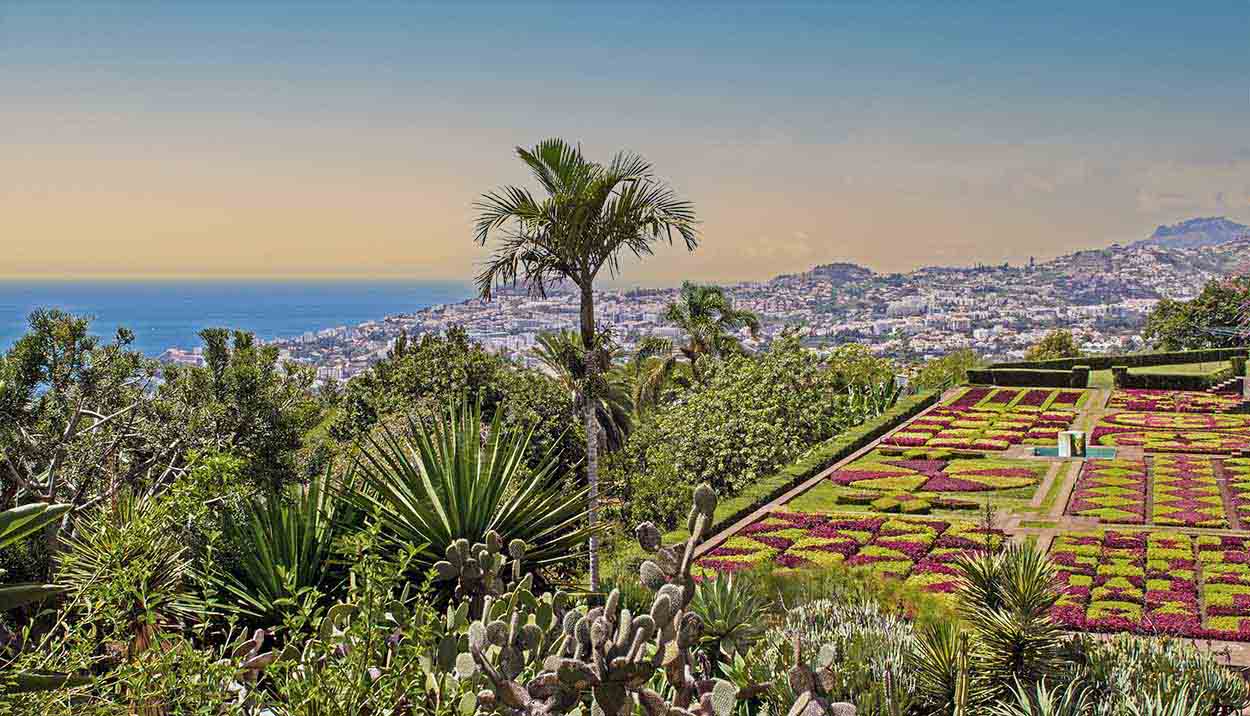 One of the jewels in Madeira’s glittering tourism crown is without doubt the magnificent Jardim Botânico (Botanical Gardens) located a short drive east of the centre of Funchal.

Here, plant lovers can immerse themselves in an enchanting world of rare and exotic vegetation, which includes a vast range of species perfectly suited to the island’s temperate, subtropical climate.

It is also the perfect place to unwind after visiting the many fascinating sights of Funchal and to soak up all the visual splendour of the many well-maintained flower beds. You’ll also be able to marvel at the head-spinning vistas (best at sunset) which extend for many kilometres both east and west along Madeira’s stunning Atlantic coastline.

The gardens occupy the grounds of a beautiful estate – the Quinta do Bom Sucesso – which once belonged to the Reid family, whose name is still firmly attached to one of the world’s most iconic hotels situated on the west side of the city centre.

The variety of species growing in the gardens is extraordinary, ranging from giant golden buttercups and dragon trees to cedars and several different types of magnolia. Don’t miss the large collection of cacti and succulents (over 200 in all) that inhabit a very picturesque corner of the gardens.

A visit to the Jardim Botânico includes the chance to learn all about Madeira’s natural history in an excellent museum, the Museu de História Natural, housed inside the Reid family’s former residence. The long list of exhibits incorporates many unusual minerals, rocks, fossils and corals discovered both on land and in the waters surrounding Madeira, Porto Santo and the much lesser-known Selvagen Islands (located north of the Canaries).

The Botanical Gardens (indicated on the Google map below) are best accessed by means of a panoramic cable-car that connects the Quinta do Bom Sucesso with Funchal and Monte, another popular tourist centre tucked away in the verdant hills overlooking the city.

The small village of Monte is world-famous for its toboggan run which the American author Ernest Hemingway once described as ‘the most exhilarating ride’ of his life. The thrill of being pushed downhill in a large and very robust whicker basket is a must for a lot of visitors to the island.

Another highlight is the Monte Palace, a major attraction with extensive tropical gardens containing several ancient olive trees (estimated to be more than 2,000 years old), a central lake with swans and ducks, an oriental garden and the Monte Palace Museum featuring a large number of precious minerals and gems, as well as an amazing collection of contemporary Zimbabwean sculpture.

Monte is also notable for being the home and final resting place of the exiled Austrian emperor, Charles I, who died in the village in 1922 at the tender age of 34. His body now lies in the Church of Our Lady of Monte, in the heart of the village.

The Jardim Botânico is a logical first stop for people touring the eastern part of Madeira, culminating perhaps with a leisurely lunch of the freshest fish or seafood in the lovely seaside town of Machico.

If the weather’s fine, spend a few hours relaxing and swimming on the town’s golden beach (made of sand imported from North Africa) before heading back to Funchal along the island’s scenic southern coast road in the afternoon.