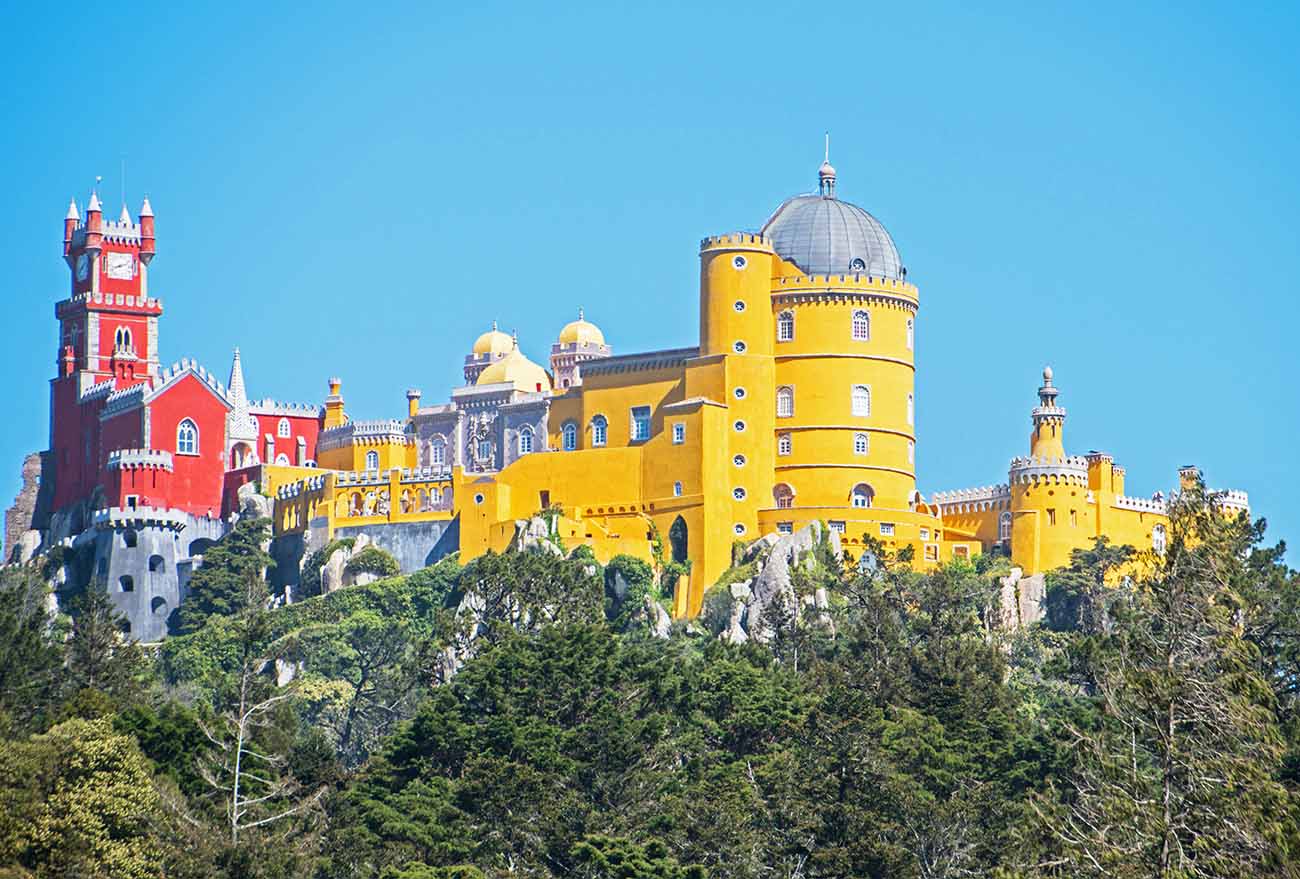 The impressive Pena Palace in Sintra

One of Portugal’s most striking architectural landmarks is the Romantic-style palace commissioned in the first half of the 19th century by D. Fernando of Saxe-Coburg-Gotha on the site of an old 16th-century convent.

Overlooking the historic village of Sintra, this beautiful Portuguese royal palace is full of unusual details and the surrounding landscape is as impressive as the architecture itself. From here you can enjoy breathtaking views of the park and the region as a whole.

Due to the way it blends into the rock, Pena Palace seems like a natural extension to the mountain on which it is perched. A visit is always one of great expectation…and nobody ever leaves disappointed.

Like the majority of buildings across the region, there’s a very interesting story attached to it. It is said that while hunting at the top of the mountain, King Manuel I saw Vasco da Gama‘s fleet enter the Tagus, returning from his epic pioneering voyage to India. On that same spot, where a chapel existed at that time, the king decided to build a convent in recognition of the navigator’s incredible achievement.

It was over the remains of this 16th-century convent that, three centuries later, the Prince Consort D. Fernando of Saxe-Coburg-Gotha created one of the most enchanting Romantic fantasies of the 19th century.

Don’t be surprised if this palace reminds you of the famous Neuschwanstein Castle in Bavaria. But the fact is that Pena Palace is older than its Bavarian counterpart, and according to many is the more impressive and genuine of the two.

During your visit, make sure you see the Arab Room, the queen’s bedroom and, most importantly, the magnificent Renaissance-style alabaster retable above the altar in the old chapel, a part of the original convent upon which the palace was built.

Those with esoteric, Masonic and Rosicrucian beliefs have been able to observe multiple mysteries at Pena Palace, like the obscure double meanings of many of its decorative items.

And yet, despite the grandness of the palace’s architecture and decoration, D. Fernando’s dream project would never have been complete without the sheer beauty of its surrounding landscape, which enhances the building’s dramatic effect.

Like a true romantic, D. Fernando set out to recreate a scenic landscape, and this he achieved quite spectacularly with the careful planning of a dense forest all the way down the mountain slopes. In fact, the Sintra Mountains we see today, a place full of streams, springs, lakes, fems, large exotic trees, rare birds in captivity and a wide variety of wild fauna, are all part of his creation.

In reality, Pena Park is one of those rare cases where nature has benefited from the activities of man, since it is the best-preserved part of the mountain.

A walk along the park’s footpaths is certainly an experience not to be missed. Once again esoteric signs are everywhere, visible to those who know how to recognise and understand them. They will be able to find traces of alchemists’ ovens and an unusually large number of octagonal stone tables.

In the centre of Sintra stands another of the most important palaces in Portugal, the Paço Real, where some of Portugal’s greatest monarchs were born, lived and died. Closer to Lisbon lies the magnificent Queluz Palace and Gardens, one of the most brilliant and shining examples of rococo architecture in Portugal.