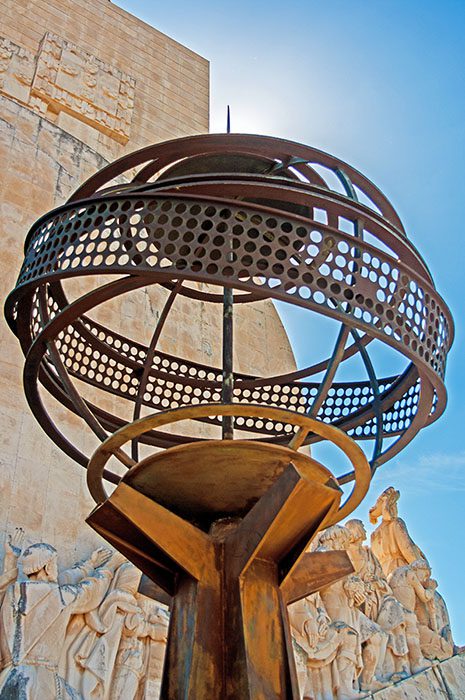 Looking upwards on a clear night, it’s difficult not to wonder how the heavens guided Portugal’s great discoverers towards new horizons in the late Middle Ages. By means of ancient nautical instruments, pioneering navigators such as Magellan, Dias and Da Gama somehow managed to find their way by the stars.

During the Age of Discovery, the astrolabe was, along with the quadrant and cross-staff, the best way for ships on the high seas to determine their latitude by using the position of the stars.

Portuguese navigators used them to measure the altitude of stars and this information enabled them to establish their latitude. But they had no means of finding their longitude, having to rely only on experience and intuition to determine their exact position.

Fifteenth-century navigators were thus able to set their course and calculate their positions adequately from the stars. The problem of longitude, however, was not solved until three centuries later with the invention of the chronometer.

Astrolabes were first constructed by the Arabs and were widely used for various purposes towards the end of the Middle Ages. However, it was the Portuguese who simplified and adapted their use for sea navigation, creating the nautical astrolabe from its flat, medieval precursor. Many Spanish navigators preferred Portuguese-made astrolabes to their own.

Mapmakers, greatly interested in the development of these instruments for use at sea, were responsible for successive improvements in their design and weight.

Navigating by astrolabe required skill and knowledge. It was known that the latitude of a position was equal to the altitude of the Pole Star. However, the Pole Star, which is today about one degree off the Pole, was approximately three and a half degrees from the Pole at the end of the 15th and beginning of the 16th centuries.

This meant that corrections had to be made to determine a ship’s true latitude. As ships sailed close to the equator, the Southern Cross was substituted for Ursa Minor, which was lying very low in the sky at this point, for navigational purposes. This method of determining latitude developed by Portuguese navigators was known as the Southern Cross Regimen.

The Southern Cross constellation, however, was often difficult to see and as voyages in the southern hemisphere increased, Portugal discovered and put into use a method of determining latitude from the meridian altitude of the sun.

Unlike the Pole Star and Southern Cross, the distance from the sun to the Pole varies throughout the year, making the means of navigating by the sun more complex. Given the meridian altitude of the sun, it is still necessary to know its distance from the Pole. In the southern hemisphere, this means knowing the distance to the equator or the angular difference, or declination, in order to determine the ship’s latitude.

Tables were drawn up for sailors showing the declination of the sun for every day of the year, marking an era in the history of navigation. Sailors finally had a sure guide that could be used in both hemispheres, which together with the mariner’s compass assured that they never got lost.

The swaying of the ships could affect the accuracy of astronomical observations, as navigators holding an astrolabe or quadrant tried to take readings from the sun. This could give rise to errors of one or two degrees, but normally bearings were no more than half a degree out. For this reason, readings were taken on land whenever possible.

Astronomical observations required mathematical calculations and the drawing up of tables for which some navigators lacked sufficient knowledge. In this context, the greatest Portuguese mathematician of the 16th century, Pedro Nunes (1502-1578), made a distinguished contribution to the technical methods available to sailors. Among his accomplishments was the application of vernier or cross-graduated scales to the astrolabe, permitting finer readings than the one- or half-degree settings that were the smallest possible until then.

Pedro Nunes also invented the ‘nautical ring’, used for taking readings from the sun, and the ‘shadow instrument’ that enabled navigators to determine the altitude of the sun without looking directly at it.

Although Portugal made a fundamental contribution to the development of nautical instruments in the Age of Discovery, its navigators were not averse to using other means such as the Kamal, a device the sailors travelling with Vasco da Gama on his first voyage saw pilots in the Indian Ocean using to determine the altitude of the stars in isbas, an ancient measure close to an inch.

The use of the Kamal, after some modification, reflects the readiness to share and learn skills and knowledge with other civilizations that characterized the Portuguese Discoveries.

Depicting many of Portugal’s heroic figures over the centuries, a monument commemorating the Age of Discovery stands on the riverbank at Belém in west Lisbon (indicated on the map below).