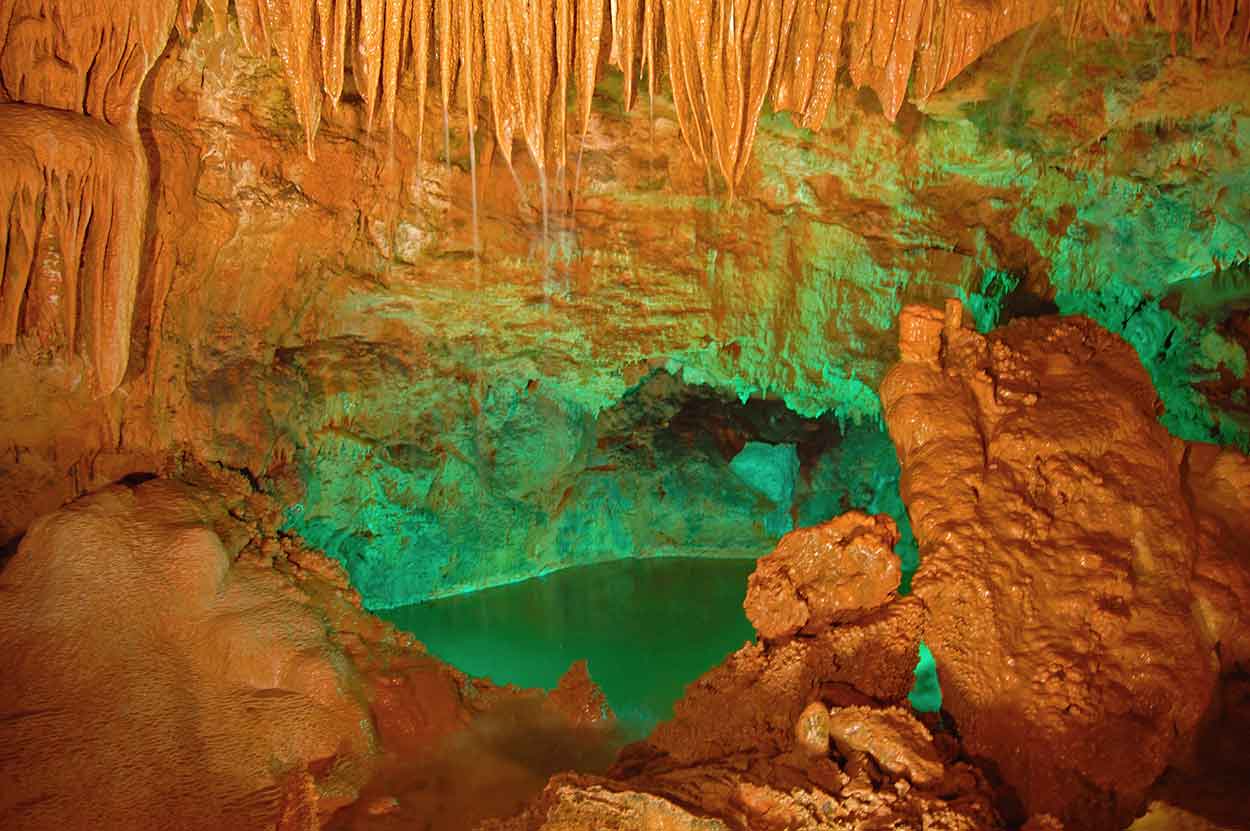 Southern Europe has many impressive caves to explore but some of the largest, deepest and most spectacular of them all are the cathedral-like Grutas de Mira de Aire located in the heart of central Portugal.

This underground fantasy world of spaghetti-like stalagmites, stalactites, opalescent rocks and other bizarre rock formations was discovered completely by accident in the 1940s and subsequently opened as a first-class tourist attraction many years later.

Today the caves rank as one of Portugal’s most popular natural attractions and visitors can enjoy the thrill of a spiralling descent to a vast end gallery that culminates spectacularly with a picture-book lake more than 100 metres underground.

The Grutas de Mira de Aire (indicated on the Google map below) represent one of several cave systems to be found in this part of Portugal, along with those at Alvados, Santo António (famous for its festoons of stalagmites and stalactites) and São Mamede just a short distance away.

Once, the whole area was the haunt of roaming dinosaurs whose footsteps (pegadas de dinossauros) are marked by signposts for visitors following a walking trail right across the park’s north-eastern tip.

This remarkable site from the Middle Jurassic Period (approximately 175 million years ago) contains not just the oldest and longest sauropod tracks to be found anywhere in the world, but also some exceptionally well-preserved traces of some of the largest land animals that ever existed on our planet.

There’s much more to see besides the Mira de Aire Caves in and around the delightful Parque Natural das Serras de Aire e Candeeiros, including the religious centre of Fátima where three shepherd children saw a vision of the Virgin Mary in 1917.

The area also boasts two of the country’s most important UNESCO World Heritage Sites – namely the Monastery of Santa Maria d’Alcobaça and the Monastery of the Dominicans of Batalha – both churches that feature very highly on the list of Portugal’s most impressive monuments.

Other places in the area well worth visiting are the lovely provincial towns of Leiria and Tomar, the latter of which is home to the Convent of Christ, another of Portugal’s UNESCO World Heritage Sites.

And you cannot tour the Mira de Aire area without visiting the ancient walled town of Óbidos  which King Dinis generously offered to Queen Isabel as a wedding present in 1281.

Further west lies the vibrant seaside town of Nazaré where some of the world’s biggest waves have been attracting the attention of the world’s top surfers in recent years.

On the 29th of October of 2020, the German surfer Sebastian Steudtner officially became the Guinness World Record holder when he surfed a wave of 26.21 metres (86 feet) off the town’s world-famous beach, the Praia do Norte.

Need more inspiration for your next visit? Why not download the Portugal Travel Show, the podcast for people planning a trip to sunny Portugal…