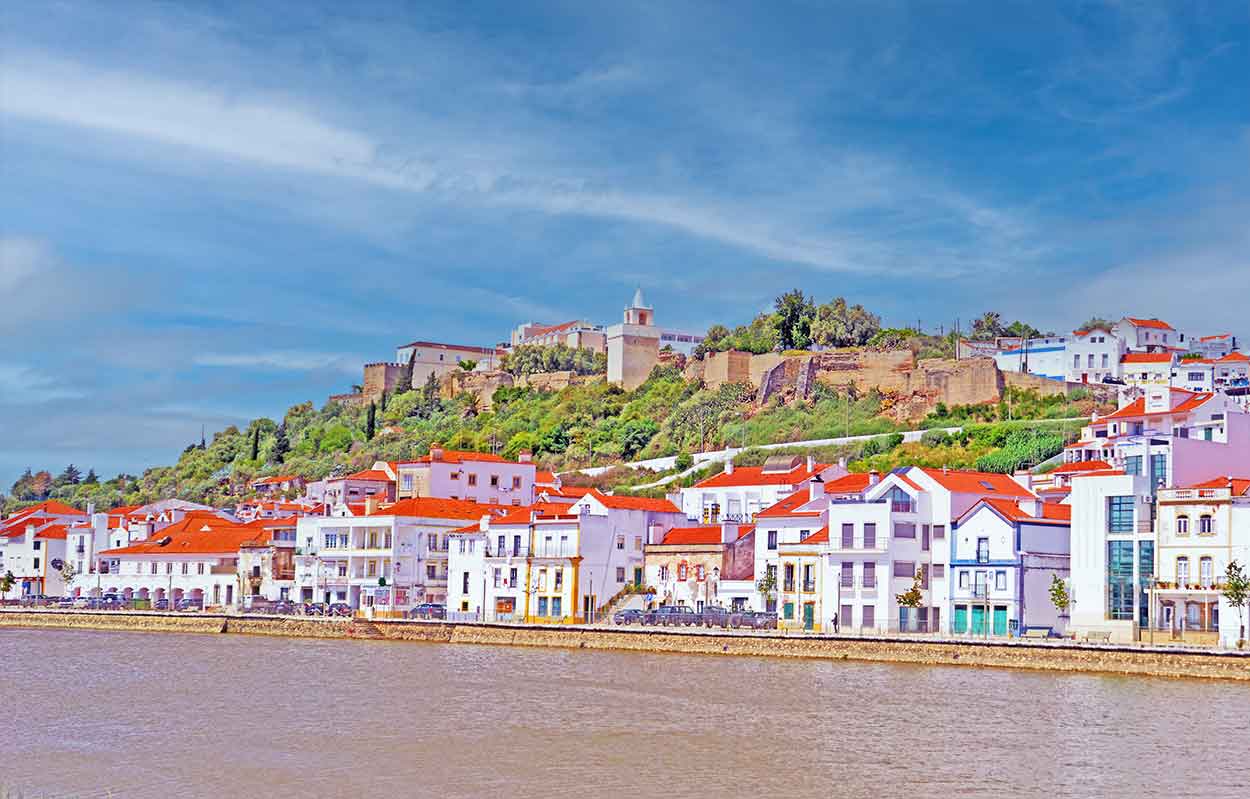 Fringed by salt-flats and paddy-fields, Alcácer do Sal is an old port town on the Sado River about 90 kilometres south-east of Lisbon.

A most singular place, Alcácer do Sal contains architectural relics from almost every period and is arguably one of the most typical towns in this part of Portugal’s picturesque Alentejo region.

Despite being more than 40 kilometres from the Atlantic Ocean, the Phoenicians established themselves here in 7 BC and following a period of Roman occupation (who called it Urbs Imperatoria Salacia) the town became the bustling capital of the Moorish province of Al-Ksar, which in Arabic means ‘fortress’.

Salt (sal) was its main industry in times gone by and a number of fine old buildings still bear witness to the town’s former prosperity with ornately carved marble fragments embedded into their façades.

First-time visitors are often surprised by the loveliness of Alcácer do Sal (indicated on the Google map below), whose bright white houses covered with tiled red roofs form a tight cluster on one side of the river below the town’s ancient castle.

Still ringed by its original walls, the Castelo de Alcácer do Sal in the upper town encloses the Romanesque church of Santa Maria, which dates from 12th century and features a fine Renaissance doorway to the chapel of the Sacrament and some exquisite 17th-century azulejo tiles.

After his monumental triumph in Lisbon, it took Portugal’s first king, Afonso Henriques, two whole months in 1158 to take the impregnable castle of Alcácer do Sal, after which it was repossessed by the Moors in 1191 and finally conquered by determined Portuguese forces in 1217.

Don’t miss the fascinating archaeological museum in the castle’s crypt which chronicles the town’s development from prehistoric times. Besides offering privileged views of the storks’ nests in the many towers and belfries, the views from the castle walls stretch across the Alentejo plains beyond the lush green paddy fields that almost surround the town.

In the centre of town stands the lovely church of Espírito Santo (founded in 1628) where good King Manuel I married his second wife, Maria of Aragon, in 1500. Other buildings worthy of note close by include the former convent of Santo António that’s most notable for its lavish 16th-century marble decoration in the chapel of the Eleven Thousand Virgins.

For travellers en route between Lisbon and the sunny Algarve, Alcácer do Sal is also a wonderful place for a leisurely lunch stopover (al fresco on a warm sunny day) in one of the many eateries that line the Sado River promenade.

Just west of the town lies the Gothic church of Senhor dos Mártires which features a rare octagonal chapel dating from 1333. The church also contains the 15th-century stone sarcophagus of Diogo de Pereira who played a key role in taking Alcácer do Sal back from the Moors in his capacity as Grand Master of the Knights of São Tiago.

The long straight road south from Alcácer do Sal (the N120) runs through a series of interesting towns and villages, including Grândola (famously connected to the 25 April Revolution) and Santiago do Cacém, from which a quick detour west will lead you to Sines, birthplace of the great explorer, Vasco da Gama.

Heading north brings you to Tróia, a beach destination par excellence in a prime location at the northern tip of a sandy peninsula where visitors can see a pod of bottlenose dolphins and the remains of the Roman city of Cetóbriga.