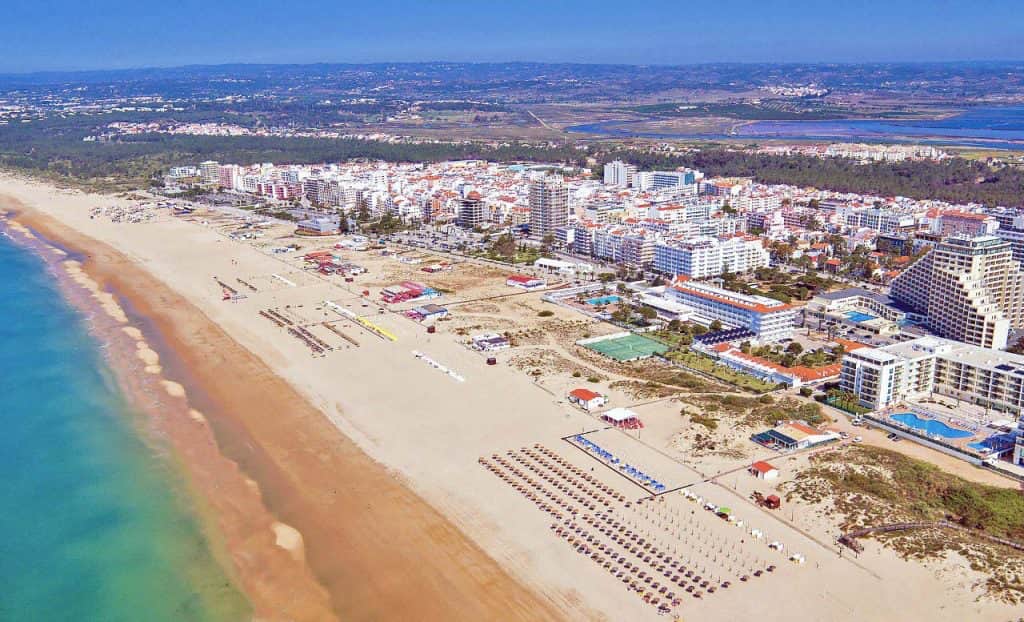 Monte Gordo has the longest beach in the Algarve

Lying just 3 km to the west of the Algarve’s sprawling frontier town, Vila Real de Santo António, the once sleepy fishing village of Monte Gordo is the last in a long line of popular beach resorts gracing Portugal’s southern shoreline.

Bright and cheerful, the town has developed considerably as a holiday destination in recent years, catering for Portuguese and foreign visitors alike.

But its centuries-old fishing tradition lives on as wives in housecoats emerge from newly-built houses to buy the best of the fresh catch from local fishermen, who can still sometimes be seen riding rickety bicycles through the streets to deliver their orders.

Monte Gordo not only boasts the largest beach in the Algarve but also the warmest waters, thanks largely to its Mediterranean climate and its favoured geographical location near the mouth of the River Guardiana. Fringed by lofty pines and lying open to the sea, its long and very wide sands stretch uninterrupted for several kilometres, making it one of the most idyllic beach towns in the whole of southern Europe.

Overlooking the beach, and one of the Eastern Algarve’s top attractions, the town’s glittering casino opened in 1996 and features a modern gaming room, around 300 slot machines and a regular floorshow. Popular with Spanish visitors due to its close proximity to the border, the casino has tables for American roulette, Black Jack, Caribbean stud poker, Texas hold’em poker and Portuguese dice and a choice of restaurants for fine dining.

At Manta Rota a few kilometres to the west of Monte Gordo, the lagoons of the Ria Formosa Natural Park begin to make way for the wide open sea. Stretching for 60 km and covering over 18,00 hectares, Ria Formosa is an important wintering ground for birds from northern and central Europe and an important stopover for migrant birds flying between northern Europe and Africa.

Heading further west brings you to Cacela Velha, a lovely little town founded by the Phoenicians with a pretty church square offering views of the lagoon against a backdrop of several off-shore beaches. The church itself dates back to the 16th century and features a splendid Renaissance main door and a Gothic side door.

Spilling into the Atlantic Ocean at the charming border town of Vila Real de Santo António, just 3 km to the east of Monte Gordo, the River Guadiana has been a natural frontier for more than 2,000 years, originally forming the boundary between the Roman provinces of Lusitania (Portugal) and Baetica (southern Spain). Regular river cruises offer visitors a taste of the tranquillity to be found in this part of Portugal, with leisurely stopovers at some of the most picturesque and unhurried towns and villages in Portugal.

Neat, clean and stylish, Vila Real de Santo António is focused around a large, airy central square paved in a radiating sunburst design. Submerged by the sea in the 17th century, it was rebuilt by the Marquês de Pombal along a grid system similar to the Baixa district in Lisbon, making the town architecturally unique in the Algarve.

A short drive north of Monte Gordo lies Castro Marim, the first headquarters of the Military Order of Christ, heirs to the Templars in Portugal. Looking across the Guadiana to Spain, the sandstone walls of its medieval castle enclose the ruins of an even older castle.