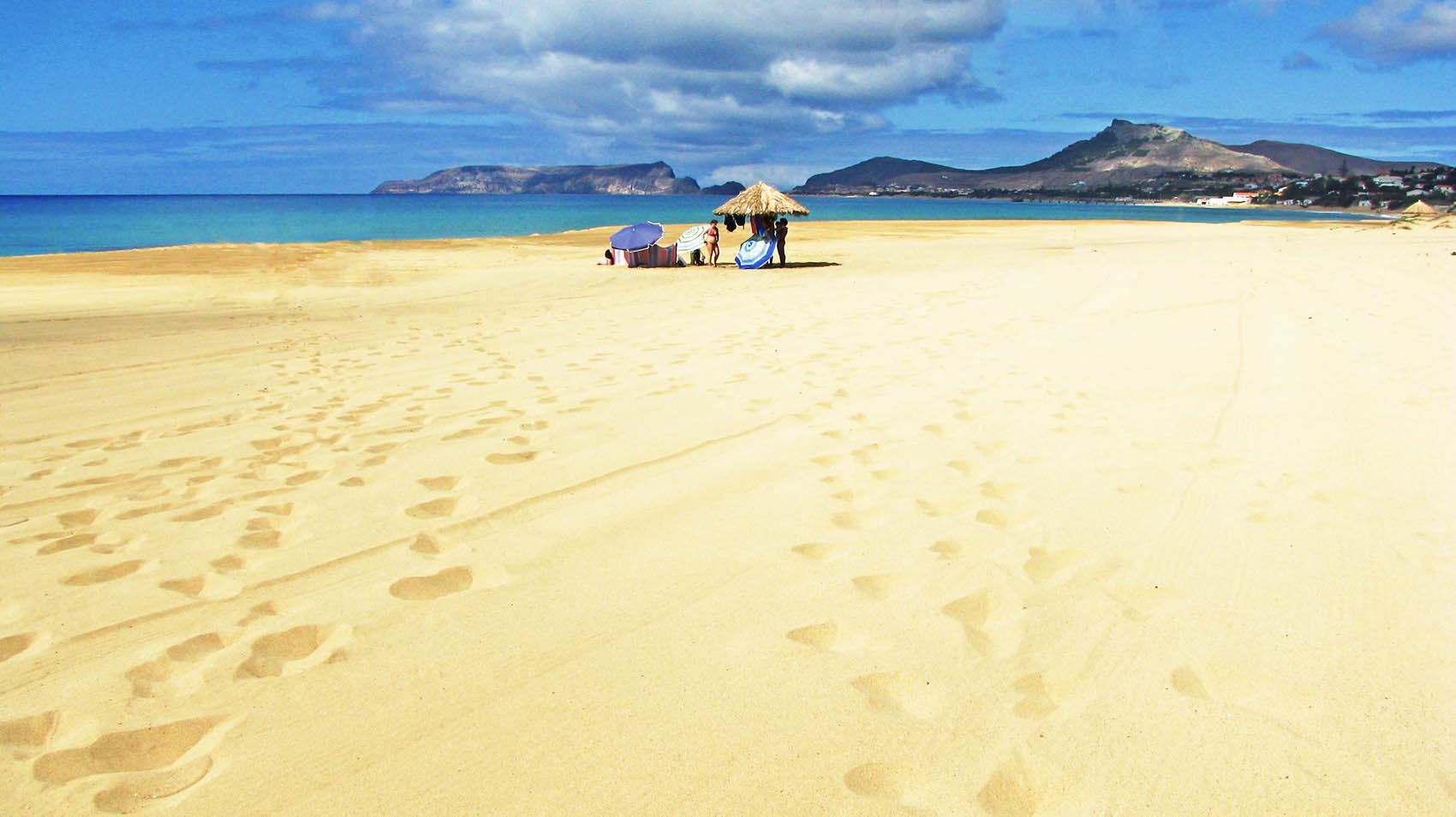 Portugal has an immense variety of sands and seascapes

Bordering the south-western edge of the Iberian Peninsula, with around half of its periphery surrounded by water, Portugal’s shoreline has been a source of attraction as well as a gateway to the rest of the world for hundreds of years.

The country’s immense variety of sands and seascapes range from the rolling breakers of the Atlantic surf and wild isolation of the Azores to the golden sun-baked beaches of the Algarve and Porto Santo (pictured above and indicated on the map below).

Many visitors to Portugal choose to take the road less travelled and seek out the more remote and lesser-known ocean paradises, many of which are far removed from the hustle and bustle of mass tourism.

One such place is Caminha in the extreme north of Portugal, right on the Spanish border. Marking the spot where the Minho and Coura rivers meet before spilling out into the Atlantic, this ancient fortress town is almost entirely surrounded by water with its beaches backed by pine forests along the slopes of high granite mountains.

Situated midway between Porto and Coimbra, Costa Nova is a fine expanse of sandy coastline stretched out along a sliver of land that separates the peaceful waters of the Aveiro estuaries from the pounding Atlantic waves. An added feature are the many beach houses painted with stripes of red, green or blue.

Further south, on an isthmus just west of Óbidos, lies the little village of Baleal, an established surfing mecca close to the fishing town of Peniche. South of Baleal is a protected bay where the atmosphere is suitably relaxed and the ocean views are among the best in Portugal.

Ericeira, about a 30-minute drive north of Lisbon, lies at the heart of a cluster of magnificent beaches, most notably Praia dos Pescadores (Fishermen’s Beach) and São Sebastião, both of which are surrounded by some of the best-value seafood restaurants in the country.

At the foot of the Sintra hills, just five minutes by car from Cascais, Guincho is generally regarded as Portugal’s best surfing beach having hosted many of the world’s top competitions. In recent years, the beach has become very popular with wind and kite surfers skimming the huge Atlantic waves in the shadow of Cabo da Roca, mainland Europe’s most westerly point.

South of Lisbon across the 25 April suspension bridge, and stretching all the way from Costa da Caparica to Cabo Espichel, wonderful beaches of fine white sand extend south as far as the eye can see. Caparica itself is an overgrown fishing village with a lively atmosphere, especially in high summer.

An hour’s drive south of Lisbon lies Sesimbra, a pretty seaside town set facing south on a picture-postcard turquoise bay. Protected from the north winds by the slopes of the Serra da Arrábida, it’s both a working fishing port and an attractive beach resort easily accessible from the capital.

Continuing south to the picturesque Alentejo region, the largest of Portugal‘s provinces, brings us to a string of hidden coves, sand dunes and dozens of idyllic beaches including Malhão, home to one of the largest colonies of storks in the whole of Europe.

At land’s end in the western Algarve, Sagres is blessed with five excellent beaches, most notably Praia do Martinhal, a favourite with local windsurfers that backs on to a magnificent stretch of sand dunes.

Several prime bathing locations exist in the eastern Algarve where the beaches are longer and the water much calmer and warmer. Chief among these are Armona, Barreta, Ilha Deserta, Culatra, Fuzeta, Tavira and Cabanas, all off-shore islands situated in a protected area known as the Ria Formosa Natural Park.

But the most precious jewel in Portugal’s glittering crown is arguably Porto Santo, a small volcanic island located 37 kilometres north-east of Madeira in the Atlantic Ocean. Blessed with mild average temperatures of between 18C and 23C all year long, its 10-kilometre-long beach boasts crystal-clear waters and soft golden sand renowned for its therapeutic qualities.