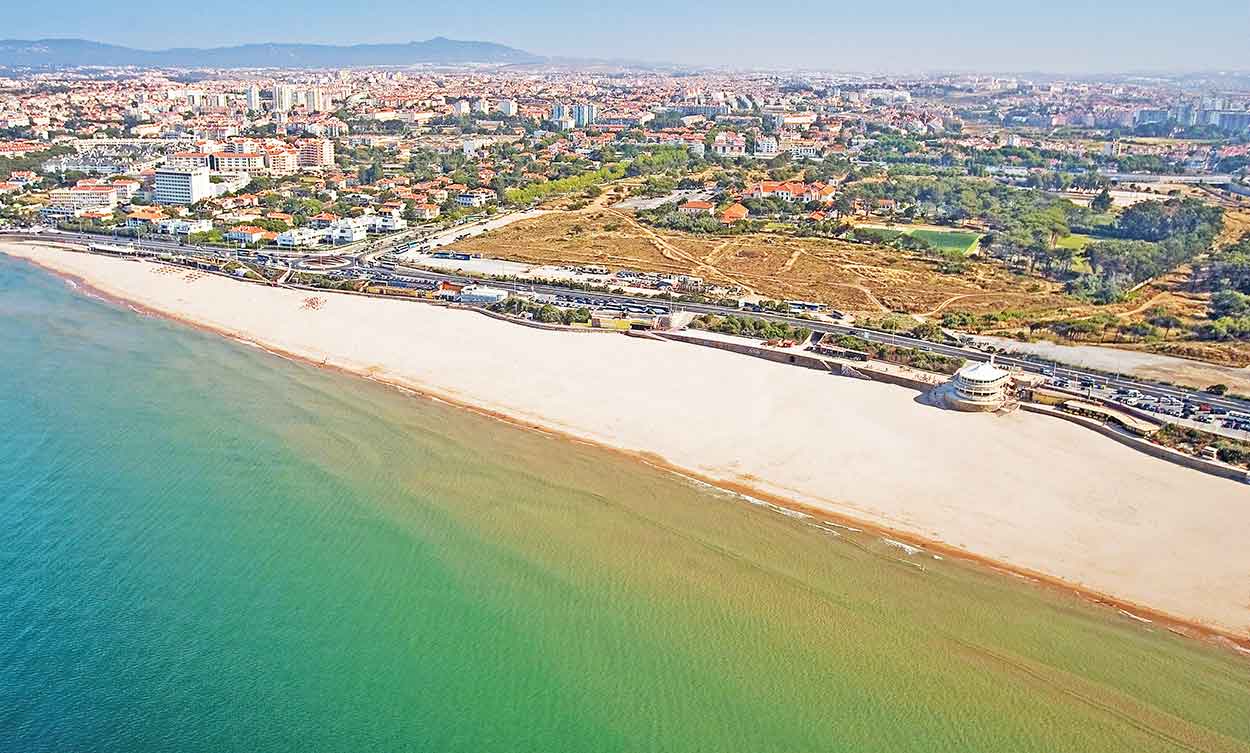 Located midway between Lisbon and Cascais, just 15 minutes west of the Portuguese capital, the seaside resort of Carcavelos is a lively, cosmopolitan place with a long, golden stretch of sandy beach flying the coveted Blue Flag.

The seafront is dominated by the huge Fort of São Julião da Barra which notoriously served as a political prison in the 18th and 19th centuries, with a succession of Jesuits, Liberals and Absolutists rotting in its dank dungeons.

Built in the 16th century, this striking coastal artillery platform used to guard the entrance to the River Tagus and has seen much military action over the centuries, most notably in 1580 when Spanish forces led by the Duke of Alba invaded the Tagus Estuary.

With small to medium-size waves guaranteed throughout the whole year, Carcavelos (indicated on the Google map below) is a young and/or inexperienced surfer’s paradise, particularly during the long summer months when bright daylight extends well into the evening.

Located in the centre of the main square, the town’s parish church (igreja matriz) boasts a lavish interior of centuries-old azulejo tiles and each Thursday, a huge market specialising in affordable, good-quality clothing and many other products sprawls between the church and Carcavelos train station.

Carcavelos is also well-known for its strong, sweet wine made famous in 1782 when the king of Portugal (Pedro III) sent a case as a gift to the Emperor of China. Made from a blend of up to nine different grapes (both red and white), Carcavelos wine was (and still is to some degree) fermented dry and fortified with grape spirit up to between 18º and 20º of alcohol.

The wine-making process continues with a small amount of vinho abafado (grape must preserved with the addition of alcohol) being added during fermentation, giving it a sweet, raisiny taste. The wine is then aged in large oak casks for five or more years adding a slight nutty flavour, reminiscent in some ways to a tawny Port.

Situated in a very picturesque and healthy setting, affording head-spinning views mostly of the sea, local villages and imposing mountains of Sintra in the distance, the Carcavelos region also bears lots of fresh fruit, especially oranges, in addition to its exquisite wine.

Located 300 metres away from the centre of Carcavelos, the ocean and the town’s beach are the main focus, including the adjacent São Julião da Barra Fortress. Fresh fish and seafood dishes dominate the restaurant menus and surf schools tout their services right along the promenade.

Out to sea on a sandbank at the mouth of the Tagus estuary stands Bugio Lighthouse, comprising a round stone fort with a central tower. Originally made of wood, the lighthouse we can see today was built in the 18th century and is still navigating vessels into and out of the estuary today.

Situated in the centre of the nearby town of Oeiras, the exquisite 18th-century palace of the Marquês de Pombal is worth seeing for its arches, semi-circular wings and curious Chinese eaves.

Another highlight is the train ride from Carcavelos along the Linha, the suburban railway line that connects Lisbon with the twin towns of Cascais and Estoril (famous for its ritzy casino), offering a succession of spectacular sea views en route.