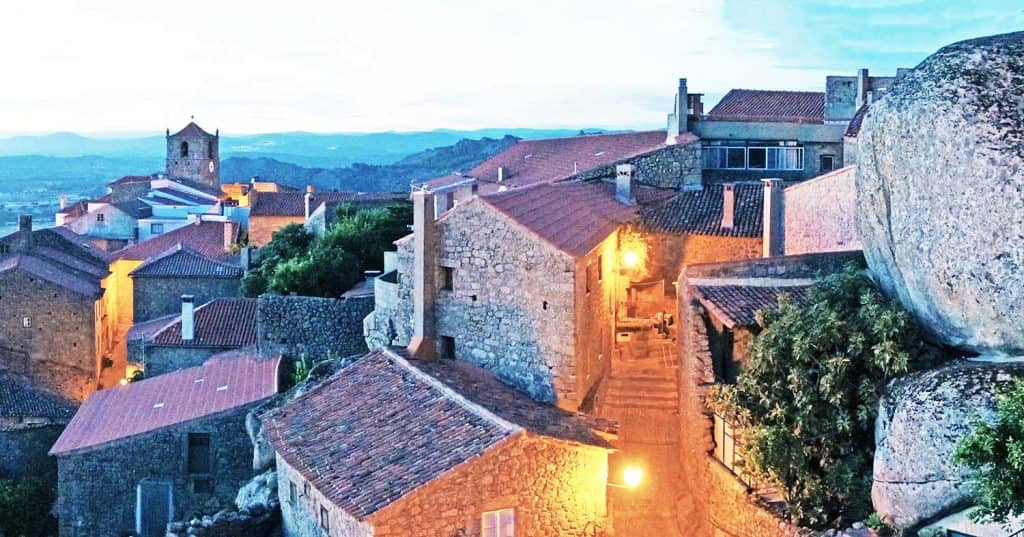 The origins of Monsanto date from prehistory

Located close to the Spanish border in the centre of Portugal, Monsanto is generally considered to be the most typical and picturesque of all Portugal’s prized villages.

Once described rather poetically as an island in the sky, it was first colonised by the Lusitanians and then by the Romans but never taken by assault in the course of countless sieges, thanks largely to its privileged and somewhat isolated setting at an altitude of 758 metres, just 10 km north-east of the historic town of Idanha-a-Velha.

Monsanto is a place where nothing ever really changes and time just seems to stand completely still. The village is one of the main features of a vast panorama incorporating Castelo Branco and the Estrela Mountains over which Lucan’s Tower has rung out the hours in exactly the same way for centuries.

With its huddle of steep, granite-paved streets and hobbit-sized houses hewn out of the rock, the origins of this ancient and altogether extraordinary place date from prehistory when it was linked with pagan rituals. In 1165, Portugal’s first king, Afonso Henriques, handed it over to Gualdim Pais, master of the Knights Templar, who built the village’s impregnable castle.

When the Romans tried to overcome Monsanto, the townsfolk hurled a fat calf over the walls to successfully trick the marauding soldiers into thinking the village was well-stocked with food and its inhabitants would never be starved into capitulation.

On account of this courageous feat of arms, the town was granted permission by King Manuel I to place on its arms an imperial eagle, as well as the armillary sphere. This momentous event is still celebrated every year with great fervour in early May during the Festa das Cruzes, when young girls dressed in pure white climb to the top of the castle and throw a calf made of roses and jars of flowers over its lofty walls.

Visible from miles around, Monsanto’s formidable stone fortress has been significantly strengthened and embellished over the years, first by King Sancho I who drove the Moors out of the area in the 12th century and later by King Dinis. Just below the castle stands the relic of the chapel of São Miguel, a roofless Romanesque church which dates back to the 13th century.

The landscape around Monsanto (indicated on the Google map below) is carpeted with the ilex and asphodels that cover the great plateau of Castile in neighbouring Spain, and the drive south-west to Idanha-a-Velha is an absolutely delightful one. Full of history and certainly not to be missed, the Idanha itself was once a Celtic village, then the Roman Egitania, and later the birthplace of Wamba, a Visigothic king.

Carrying on in the same direction brings you to Castelo Branco, one of the loveliest cities in the country. With its broad avenues, large squares and attractive parks and gardens, it is a very good base from which to explore Monsanto and the border regions of central Portugal.

Monsanto is also within striking distance of Serra da Estrela, the highest mountain on mainland Portugal and centrepiece of a 100,000-hectare area of protected parkland incorporating the towns of Seia, Gouveia, Covilhã, Manteigas, Celorico da Beira and Guarda. Representing a natural barrier between northern and southern Portugal, Serra da Estrela is a land of sheep rearing, wheat farming and production of one of Portugal’s most popular cheeses.