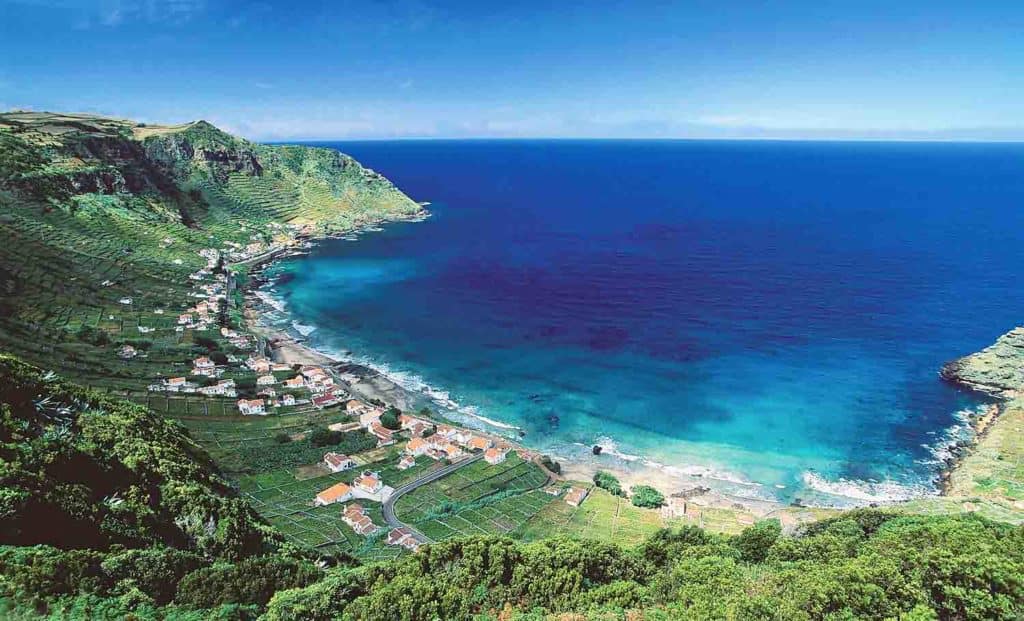 Santa Maria is the oldest island in the Azores

Roughly rectangular in shape, Santa Maria Island is both the most easterly and southerly of the remote Azores archipelago, and the first of nine to have been discovered by Portuguese navigators in the 15th century.

As the oldest island in the Azores, Santa Maria has a different geological composition to the other islands. Besides volcanic rock, its landscape features limestone, clay and sedimentary rock; it is also the driest and warmest of all the islands and for this reason has been described as the ‘Algarve of the Azores’.

Just 17 km (11 miles) long and 9.5 km (6 miles) wide, the island is sparsely populated with around 6,000 people and its inspiring countryside is an expanse of delightful hill-country interspersed with clusters of hamlets and small pastoral villages beautifully punctuated by the sun’s sharp rays intermittently piercing through the clouds.

Santa Maria was officially discovered by Portuguese explorer Gonçalo Velho Cabral on the 15th of August 1432. Its name derives from the moment one of his lookouts suddenly spotted a small landmass in the distance and loudly exclaimed, ‘Santa Maria!’ (Holy Mary!).

The island was subsequently settled by peasants shipped from the mainland, mostly from the Algarve, on the orders of Prince Henry the Navigator, who also sent over cattle to provide them with sustenance.

Christopher Columbus is also known to have dropped anchor off Santa Maria in 1493. It was his first landfall during his famous voyage back from discovering the New World and several members of his crew prayed at the Chapel of Nossa Senhora dos Anjos (Our Lady of the Angels) to give thanks for having survived the turbulent Atlantic storm that swept them ashore.

The oldest religious building in the archipelago, this intricately-detailed chapel still stands proud in the tiny village of Anjos, on Santa Maria’s northern coast. Like most of the churches in the Azores, it is blessed with a brightly whitewashed façade and bordered by black volcanic stones.

Set in a part of the Atlantic where the ocean reaches depths of more than 3,000 metres (10,000 feet), the island is embroidered by a rugged coastline of sheer cliffs and deeply indented bays.

Nestling in the south-western corner of the island, its main town, Vila do Porto, was the first in the Azores to receive a charter in 1472. Set on a hillside between the deep channels of the Ribeira Grande and Ribeira Sancho, one of its main attractions is the Centro de Interpretação Ambiental Dalberto Pombo, which celebrates the work of a local man who championed the island’s rich natural heritage.

Close by, with its white walls, black basalt stones and rusted cannons overlooking Vila do Porto’s historic harbour, the well-preserved 16th-century Fort of São Brás houses the chapel of Nossa Senhora da Conceição, which was built in the 19th century on the ruins of a 15th-century church.

Located in the centre of the island, Pico Alto (the island’s highest point) rises to almost 600 metres to provide stunning wide-angle views of the surrounding land and seascapes.

Praia de São Lourenço on the north-east coast is a large stretch of white sandy beach, quite a rarity in the Azores. The bay surrounding it forms a vast hollow carpeted with terraced plantations and vineyards separated by grey stone walls rising steeply up the mountainside to present one of the most striking landscapes in the Azores.

Encased by spectacular headlands, the half-moon-shaped Praia Formosa is another pristine strip of fine white sand and one of the most idyllic beaches in the archipelago.

Near Santa Maria’s northern shores lies Barreiro da Faneca, a vast reddy-orange desert-like plain reminiscent of a Martian landscape. With almost no vegetation, this striking natural phenomenon is an expanse of Pliocene sediments comprising clay minerals spread across the ancient lava flows that once oozed down the hills from Pico Alto mountain.