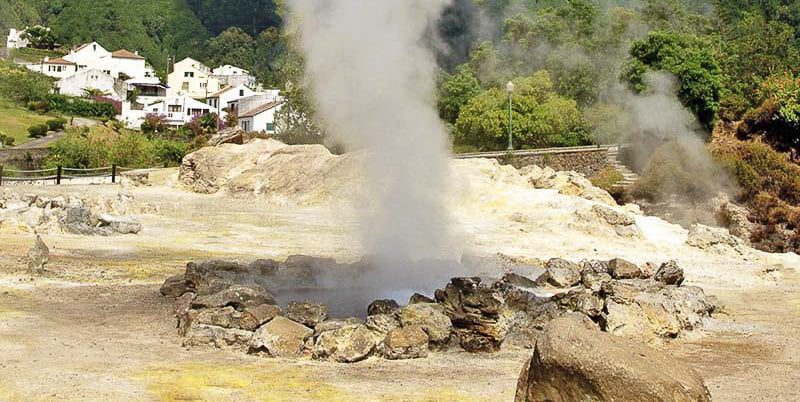 Furnas is one of Europe’s best-kept spa secrets

One of Europe’s best-kept spa secrets is Furnas, a live volcanic showpiece located on the eastern side of São Miguel island in the Azores archipelago of Portugal.

Set in a picturesque valley surrounded by mountains, Furnas is one of the most celebrated beauty spots in the whole of the Azores. The place gets its name from the caverns (furnas) that were created by a volcanic eruption in the 17th century.

The road to Furnas from the island’s capital, Ponta Delgada, is a treat in itself, running past fine properties and crossing the high serras through dense, subtropical plantations where the pineapple is cultivated.

Furnas is alive with volcanic activity, particularly at the site of the many caldeiras where visitors can see the steaming geysers and hot bubbling springs called fumaroles that provide the therapeutic mud and mineral water used for today’s modern spa treatments and therapies.

The waters themselves have been proven over the years to be successful in treating bronchitis, rheumatism, dermatitis and gastrointestinal diseases. With about thirty different sources at a range of temperatures, Furnas (indicated on the Google map below) is one of the largest natural spa centres in Europe and scientific studies have been conducted there since the 19th century.

On the west side of Lake Furnas lies Terra Nostra Park (Parque Terra Nostra), which was landscaped more than two hundred years ago in the style of an English garden. Covering 12 hectares (30 acres), the park incorporates an upmarket hotel and a wide variety of exotic plants that flourish in the warm, humid climate.

The park’s most interesting feature is a natural thermal swimming pool filled with heated mineral water so replete with iron that it looks like pure apricot juice. With temperatures ranging between 35 and 40 degrees Celsius, a dip in the pool provides a most soothing sensation of rest and relaxation that invigorates the mind, body and soul.

The hot springs on the lake’s northern shores are where the islanders have for generations come to cook cozido, a rich meat and vegetable stew boiled underground in a huge pot for between five and seven hours.

Holes about one metre deep are dug in the hot ground around the lake into which a large metal container is lowered. This is filled with a variety of meats, different types of sausage and a few vegetables, most notably kale, cabbage and potatoes. Cooked slowly and evenly, cozido retains all its natural flavours and can be found in many restaurants on the east side of São Miguel island and is today considered one of Portugal’s most popular dishes.

Just 12 km south-east of Furnas, the quaint little fishing village of Povoação was the first settlement on São Miguel and is accessible by a mountain road that climbs up in hairpin bends to the mountains before running through forests, past gorges and along valleys. Its restored 15th-century chapel of Santa Bárbara is thought to have been the island’s first place of worship.

10 km further east, the Miradouro da Madrugada is a spectacular cliff-top vantage point affording unparalleled views of the evening sunset, one of the last to be seen in the whole of Europe.