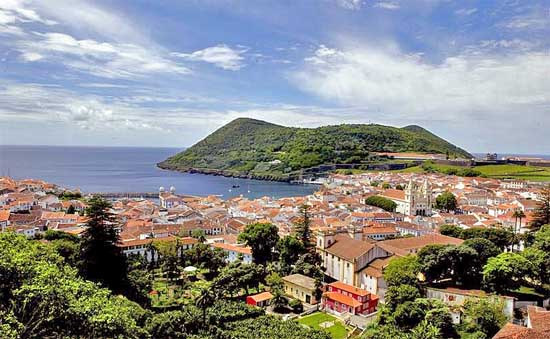 Angra do Heroísmo is a World Heritage Site

Full of customs and tradition, the delightful UNESCO World Heritage city of Angra do Heroísmo has played a strategic role as a mid-Atlantic port over the centuries.

Nestling midway along Terceira Island’s southern shoreline in the Azores, a nine island mid-Atlantic archipelago belonging to Portugal, Angra do Heroísmo was also the first settlement in the Azores to be raised to the status of a city, having received its charter in 1534.

Capital of the Azores until 1832, when central administration was transferred to Ponta Delgada, Queen Maria II bestowed the name Heroísmo upon the town for the resistance it offered the troops of King Miguel in 1829.

Close to the town’s main park – the Jardim Municipal – lies the 17th-century Igreja do Colégio, a Jesuit church whose lavish decorations include a fine display of 17th-century Dutch tiles.

Housed in a former convent, the Museu de Angra do Heroísmo has an unusual collection of 15th to 20th century weaponry, religious paintings and sculpture.

Overlooking the town on the western side of the bay, the 17th-century São João Baptista Fortress was built during Spain’s occupation of Portugal and contains the Governor’s palace.

A short drive north of Angra do Heroísmo in the centre of the island, Terceira’s volcanic origins can be seen in the form of a 3-kilometre-wide crater, the largest in the Azores, known as the Caldeira de Guilherme Moniz.

Worth seeing nearby are the Algar do Carvão, an enormous subterranean cave, and the hot steaming geysers of Furnas do Enxofre.