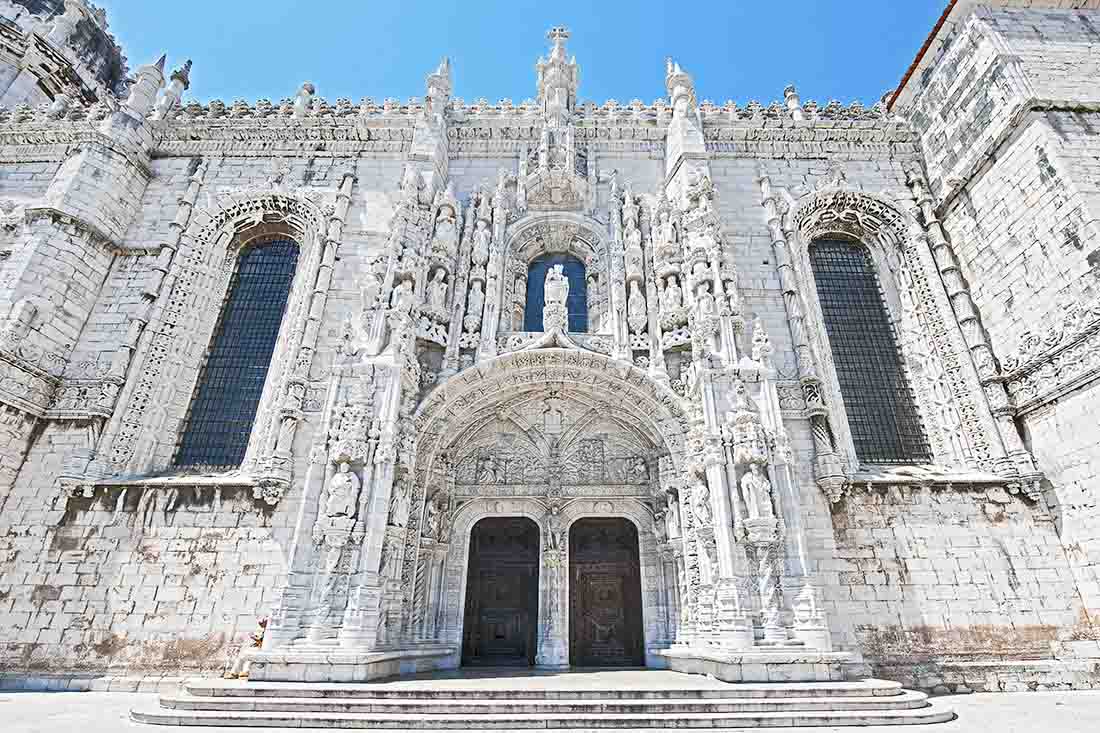 Lisbon's architecture is notable for its intricate stonework

History has shaped the Portuguese capital with a succession of architectural influences over the centuries, most notably the Moors who occupied the city for more than four hundred years.

With its splendid mix of styles and designs, Lisbon has become a popular place of pilgrimage for lovers of fine and intricate stonework, examples of which can be seen in the 12th-century Romanesque cathedral of Lisbon, the pure classicism of the church of São Vicente de Fora and the magnificent Jerónimos Monastery (pictured above).

Named after the king in whose reign it first emerged, the late 15th- and early 16th-century Manueline architectural twist reflects the opulence of Portugal at the height of its power, the finest example being the aforementioned Jerónimos Monastery in Belém (indicated on the map below).

Developed in the early 18th century, the elaborately ornate Baroque and Rococo styles were very well suited to the nation’s upbeat attitude at a time when the riches of the Portuguese Empire were pouring into the capital.

Bordering the Alfama district close to the river in Rua dos Bacalhoeiros, the House of Pointed Stones (Casa dos Bicos) was constructed at the beginning of the 16th century and is an adaptation of the early Italian Renaissance style. Now the headquarters of the José Saramago Foundation, the building stands out for the uniqueness of its façade made up of pyramid-shaped pointed stones. Polished like diamonds, the stones seem to protect the building from the outside world although the great earthquake of 1755 destroyed the top two of its original four floors, but the restoration of the upper floors gives visitors a good idea of how the building looked when it was first built.

In very close proximity to the Casa dos Bicos on Rua da Alfândega, the intricately-carved Manueline-style doorway of the church of Conceição Velha is a fine example of the rectangular, geometrically ordered architecture typical of 16th-century Lisbon.

The grid-style layout of downtown Lisbon can be accredited to one man, Sebastião José de Carvalho e Melo, better known as the Marquês de Pombal. For the first time in modern Europe, he systematically designed the city single-handed after great earthquake. Driven by the famous words, ‘let’s bury the dead and care for the living’, his distinguished architectural blueprint pointed the way for city planning in the future and his early example of contemporary town planning is as practical today as it was during his time.

In Lisbon, visitors cannot help but notice the delightful painted tiles known as azulejos that adorn many of the city’s buildings, both outside and within. This attractive architectural accessory was introduced by the Moors who occupied Lisbon for over four hundred years. The word azulejo derives from the arabic words al zulaich (which means shiny stone) and there many examples to be seen in and around the capital.

Walking up Lisbon’s main pedestrianised shopping street, Rua Augusta, takes you under the city’s impressive triumphal arch which was built to celebrate the city’s reconstruction after the 1755 earthquake. At the top of the street, Portugal’s national theatre – the Teatro Nacional D. Maria II – dominates the scene. Named after Dom Pedro’s daughter, the imposing neoclassical edifice was built in the 1840s by the Italian architect, Fortunato Lodi, and features a statue of Gil Vicente, Portugal’s earliest and most celebrated dramatist.

Just off Rossio Square in the heart of downtown Lisbon stands the filigree-style Santa Justa elevator, one of the most impressive examples of architectural engineering in southern Europe. Inaugurated in 1902, this unique form of public transportation stills carries its passengers in two solid wooden cabins over thirty metres (ninety-eight feet) between the city’s Baixa district and Carmo Square.

Located a short walk from the top of the elevator, the São Carlos opera house dates from 1793 and is recorded as Portugal’s earliest example of Neoclassical architecture. Inspired by the San Carlo theatre in Naples, the building boasts a beautifully proportioned façade and an interior rich in gold and red velvet.

Continuing through Lisbon’s fashionable Chiado district brings you to the imposing São Bento Palace, Portugal’s very own Houses of Parliament. This massive white Neoclassical building was originally a Benedictine monastery in the late 1500s prior to becoming the seat of the Portuguese government in 1834.

Close by in the Calçada da Estrela stands the strikingly impressive Basílica da Estrela. Built by Queen Maria I at the end of the 18th century as a token of thanks for bearing her a son, this church of shimmering white stone is believed to be the last large-scale Baroque church to have been built in western Europe. Its key features are a huge dome, one of the most emblematic features of the city’s skyline, along with a Christmas crib with life-size figures carved by Joaquim Machado de Castro (1731-1822).

Further west, the awe-inspiring Águas Livres Aqueduct is another of the capital’s architectural highlights. Built in the mid-18th century, the entire structure stretches 19 kilometres (11 miles) and comprises a total of 109 arches, 14 of which link the city centre with Monsanto Forest across the Alcântara Valley. The tallest of the arches stands 65 metres high and is said to be the tallest in the world.