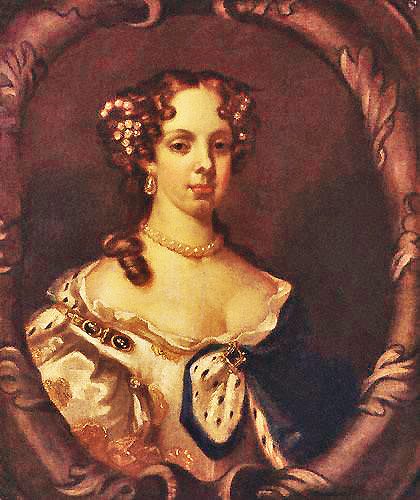 Although Catarina de Bragança, the queen-consort of Charles II, didn’t introduce tea to England, she certainly made the afternoon tea dance fashionable, and due to her influence tea has become the widely-drunk beverage we still enjoy today.

On St Catherine’s Day, the 25th of November, in the Ducal Palace of a quaint and remote Portuguese town called Vila Viçosa, a daughter was born to the Eighth Duke and Duchess of Bragança. She was baptised Catherine. Today, her name is associated with one of the most populated councils of the United States, the Borough of Queens in New York City.

The extraordinary achievements of the Portuguese explorers during the 15th and 16th centuries established important trade and territorial advantages for Portugal. These advantages were coveted by the great powers in Europe and particularly by Spain, which was able to dominate the Portuguese throne from 1580 lo 1640.

The period of Catherine’s life was marked by a renewed spirit of Portuguese nationalism and a series of alliances and treaties that secured permanent independence for Portugal as a nation.

In 1641, a national uprising brought to an end sixty years of Spanish domination and Catherine’s father assumed the throne as João IV of Portugal. After his death in 1656, steps were taken to further strengthen Portugal’s independence through an alliance which was to be made binding by a royal marriage contract. A marriage between Catherine and Louis XIV of France was proposed, but due to the uncertain political attitude of France towards Spain, it did not come about.

In 1661, Charles II of England, whose father Charles I had been beheaded by Cromwell, was restored to the monarchy amid popular rejoicing. When Charles decided to marry, the search was on for a suitable future Queen of England.

His marriage to Portugal’s Catherine of Bragança was a desirable one for both parties. She gained a powerful ally for her country and Charles gained an extremely wealthy wife with holdings in her dowry that would greatly affect England’s future development as a merchant state. At the time of her wedding, Catherine’s dowry was, in fact, the largest ever recorded.

The royal nuptials were marked by extensive celebrations in Portugal and England. In 1662, the British fleet arrived in Lishon, lead by the brigantine Royal Charles.

Following spectacular farewell festivities which included a bullfight, street lanterns, fireworks and elaborate processions in Lisbon’s main square, Terreiro do Paço, the future Queen of England departed on the Royal Charles for her new homeland.

The voyage to England was a long and stormy one. In May 1662 a secret Roman Catholic wedding ceremony was performed in Portsmouth, followed by a publicly-celebrated Anglican service. The marriage had the full support of the Queen Mother of England who was still living in Paris and desired to see her son converted to Catholicism. Louis XIV, Charles’ cousin, also supported the marriage and offered Charles a large sum “to compensate for his immediate expenses”.

The royal couple, Charles II and Catherine of Bragança, have a very special place in the history of New York. The city was captured by the British from the Dutch in 1664, two years after their marriage. Called New Amsterdam under Dutch rule, it was renamed New York in honour of Charles’ brother, the Duke of York. The Borough of Brooklyn was named Kings County in tribute to Charles II, while the Borough of Queens was given its name to commemorate Catherine.

Life in England was difficult for her though. She never became proficient in English and her Portuguese costumes and hair styles were considered archaic curiosities. Her staunch adherence to the Catholic faith inevitably drew her into the conflict between Protestant and Catholic forces in England. Her husband defended her against those in Parliament who sought to threaten her position as queen but he was notoriously unfaithful in his personal affairs, fathering as many as fifteen illegitimate children by a variety of mistresses. This personal disappointment was compounded by Catherine’s own inability to produce an heir. Her infertility was used as the basis of numerous plots against her.

Catherine surely earned Charles’ loyalty and was a devoted wife to him from the day of their first meeting. Despite the difficulties and disappointments of their marriage, a mutual respect and affection in their relationship is clearly evident.

Catherine’s presence in the English court significantly altered the social habits and customs of seventeenth-century England. The acquisition of Bombay by the British led to the first large-scale importation of tea and other Indian goods, influencing decorative styles in furniture and textiles. Another consequence of the increased commerce with Portugal that resulted from the marriage treaty was the introduction of port and Madeira wines.

The Portuguese queen gradually became accustomed to the ways of her new country. Credited with the introduction of ltalian opera, she adopted a more fashionable style of dress and organised innumerable balls and other types of entertainment such as tea dances at court, establishing the long-held British tradition of afternoon tea. She enjoyed long rides with her ladies in Hyde Park, regularly reviewed the royal fleet and participated in such court recreations as picnics, fishing and archery at which she became quite skilled.

Despite the many intrigues against him, Charles II died in bed in 1685 without an heir. His brother, the Duke of York, succeeded him as James II, but was later forced to abdicate in favour of his son-in-law, William of Orange.

In declining health, Catherine sought to return to Portugal but was again a victim of religious tensions which forced her to remain in England as a discreet link to Catholic forces in Europe.

In 1692, over thirty years after her grand departure, Catherine was finally able to return to her homeland. She was again greeted in Lisbon by street lanterns, fireworks and bullfights in her honour, as well as solemn court festivities which lasted several days.

After adopting several residences in Portugal, Catherine decided to construct her own palace in Bemposta where she spent her final years. She served briefly as Regent of Portugal on two occasions before her death on December 31, 1705.

She is buried in the Royal Pantheon of the Church of São Vincente de Fora in Lisbon (indicated on the Google Map below).