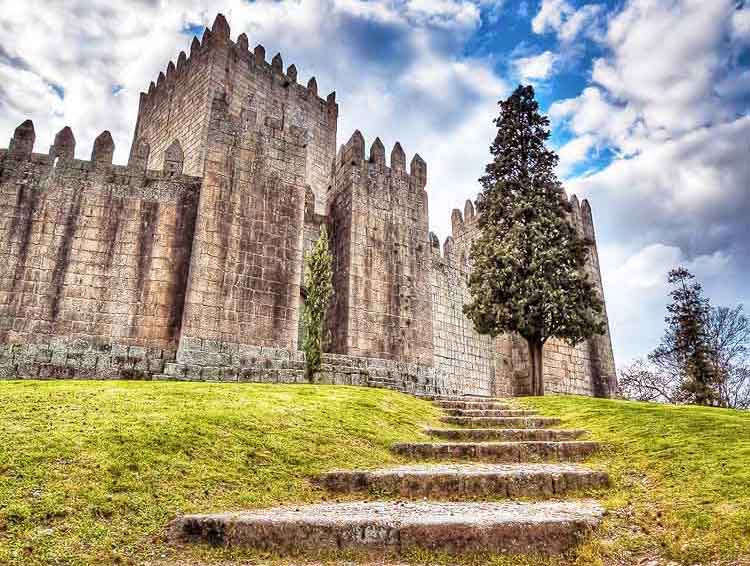 Evoking the Middle Ages, the grand old Castelo de Guimarães still exudes much of the boldness and pride that created the kingdom of Portugal many centuries ago.

Portugal’s first king, Afonso Henriques, is widely believed to have been born inside the castle, a magnificent fortress perched on top of Sacred Hill (Colina Sagrada) – a place that remains very dear to the hearts of the Portuguese people today.

Known in Portuguese as the Torre de Menagem, the impressive 10th-century keep (along with its eight surrounding towers) was the inspiration behind the country’s coat of arms, and the whole castl complex is affectionately known as the ‘cradle of the nation’ (o berço da nação Portuguesa).

Portugal’s history is a long and chequered one, but arguably the most important chapter of them all is the story of how the lovely city of Guimarães and its magnificent castle soared into prominence well over 900 years ago.

In 1095, the King of León and Castile awarded the hand of his daughter, Teresa, to a French nobleman, Henry of Burgundy, who had assisted the Spanish king in driving the Moors out of northern Iberia.

The fertile province of Portucale – which roughly comprised the land between the Douro and the Minho rivers, including the handsome city of Porto – was part of Teresa’s dowry, and the couple chose Guimarães as their court.

Teresa bore Henry a son supposedly within the castle’s walls, a fine and very healthy baby who was duly christened Afonso Henriques, a name that was destined to become deeply synonymous with the birth of the wonderful country we know today as Portugal.

Nevertheless, when his mother continued to ally herself with the Spanish realm, Afonso later took up arms against her forces and went on to score several monumental victories before crowning himself King of Portucale in 1139, thus marking the beginning of the country’s 771-year-long monarchy.

On the green beside the castle’s imposing ramparts stands the historic 12th-century Romanesque church of São Miguel do Castelo where the prolific and very courageous young man is believed to have been baptised. Covered with important gravestones, its ancient floor is one of the most historic in Portugal and today reads like a Who’s Who of Portuguese medieval nobility.

Close by, the 15th-century Paço dos Duques (Ducal Palace) must also be seen for its armoury, numerous paintings by Portuguese, Dutch and Italian masters, several splendid pieces of Indo-Portuguese furniture, some fine old French and Flemish tapestries and an extremely rare collection of Persian rugs from the 15th to 17th centuries.

Located deep in the heart of the green and pleasant Minho region, Guimarães (indicated on the Google map below) is within easy reach of many of the most interesting attractions in northern Portugal, most notably Citânia de Briteiros, a well-preserved fortified Celto-Iberian settlement dating back more than 2,500 years.

Located just 25 kilometres north-east of Guimarães is Braga, a charming city famous for its Holy Week celebrations and 12th-century cathedral housing the excellent Sacred Art Museum where many of Portugal’s most important religious treasures are on display.

Other places of interest situated in close proximity to Guimarães are the delightful medieval town of Ponte de Lima and the enchanting Peneda-Gerês National Park, an area of immense natural beauty in the extreme north of the country.

Travellers with more time on their hands are urged to visit Porto, Portugal’s second city, where many top tourist attractions exist, including the ancient Ribeira riverside district which forms an integral part of Porto’s inner city classified as a UNESCO World Heritage Site in 1996.