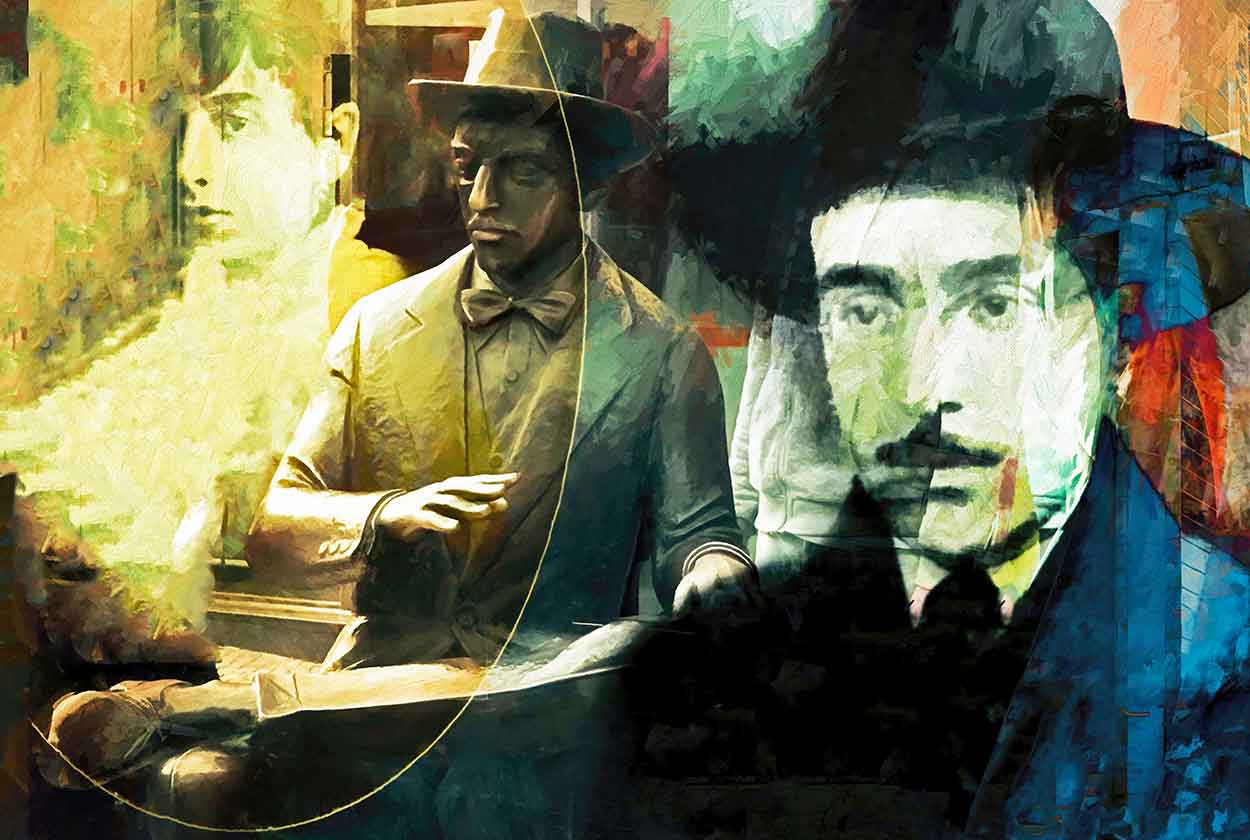 One of Portugal’s greatest literary figures, Fernando António Nogueira Pessoa is posthumously regarded as the most extraordinary poet of his generation.

He was a man who created different poet-personalities which he referred to as heteronyms, each with their own distinctive style.

This, in turn, enabled him to express himself in many different ways and, although his works are distinguished by their classic form, they are sometimes surrealistic in their synthetic expression and imagery.

Pessoa was a prolific writer, and not only under his own name because he created approximately seventy-five others, of which one particularly stands out, namely Álvaro de Campos who was fictitiously born in Tavira in the Algarve in 1890 and is arguably the most enduring of them all.

Even though he never actually existed, except in Pessoa’s increasingly-fertile mind, Álvaro de Campos was tall, thin, slightly stooped and wore a monocle. He came from a Jewish family and, after attending secondary school, trained as a ship-building engineer in Scotland.

Following a long sea voyage to the Far East, he returned to Lisbon to write poetry and after a short but fulfilling life he died in Lisbon in 1935, the same year as Pessoa.

Born in Lisbon towards the end of the 19th century, Pessoa himself moved to South Africa where he grew up and attended school, later returning to the Portuguese capital where he was to embark on a writing career by contributing poetry to the literary magazines of his day.

In his glasses, bow-tie and felt hat, he became a familiar figure in Martinho da Arcada, an old café and dining establishment located in the north-eastern corner of Lisbon’s Praça do Comércio. He was also a regular customer at Café Brasileira where a statue of him now exists.

Pessoa’s name in Portuguese means ‘person’, but very few people actually came to know who this individual really was. However, at 32 he fell in love with a 19-year-old girl called Ofélia and wrote over fifty letters to her and many love poems about her.

Resolutely private and often very reclusive, he became an active leader of Portugal’s Modernist movement and his production of poetry and prose in English during this period was very intense. Nevertheless, he only published one book during his lifetime, the epic Mensagem, which was released in 1934 just one year before he died.

Another of his most famous works was Book of Disquietude, a work of imaginative prose set in Lisbon but only published forty years after his death.

Still very much an enigma today, Pessoa’s vision mostly embraced Portuguese destiny and human love, and his work continues to be widely read all over the world in dozens of different languages.

One of the great literary figures of the 20th century, Fernando Pessoa was a curious, introvert and highly pensive man and very much a product of his time. Following his death aged just 47, a large wooden trunk was discovered in his house on central Lisbon’s Rua Coelho da Rocha where he had spent the last fifteen years of his life.

Visitors to Lisbon can learn more about Pessoa’s life in the house where he lived from 1920 until his death in 1935. Now a museum, the Casa Fernando Pessoa (indicated on the Google map below) contains some of the poet’s original furniture, his personal library and a series of well-organised displays covering his fascinating literary career.

Equally enjoyable, you can take a selfie next to a life-size bronze figure of the great man sitting outside Café Brasileira, one of his most regular haunts in Lisbon’s upmarket Chiado district.

He is also famously depicted in a striking portrait by the renowned Portuguese painter Almada Negreiros which now hangs in the Gulbenkian’s Centro de Arte Moderna.