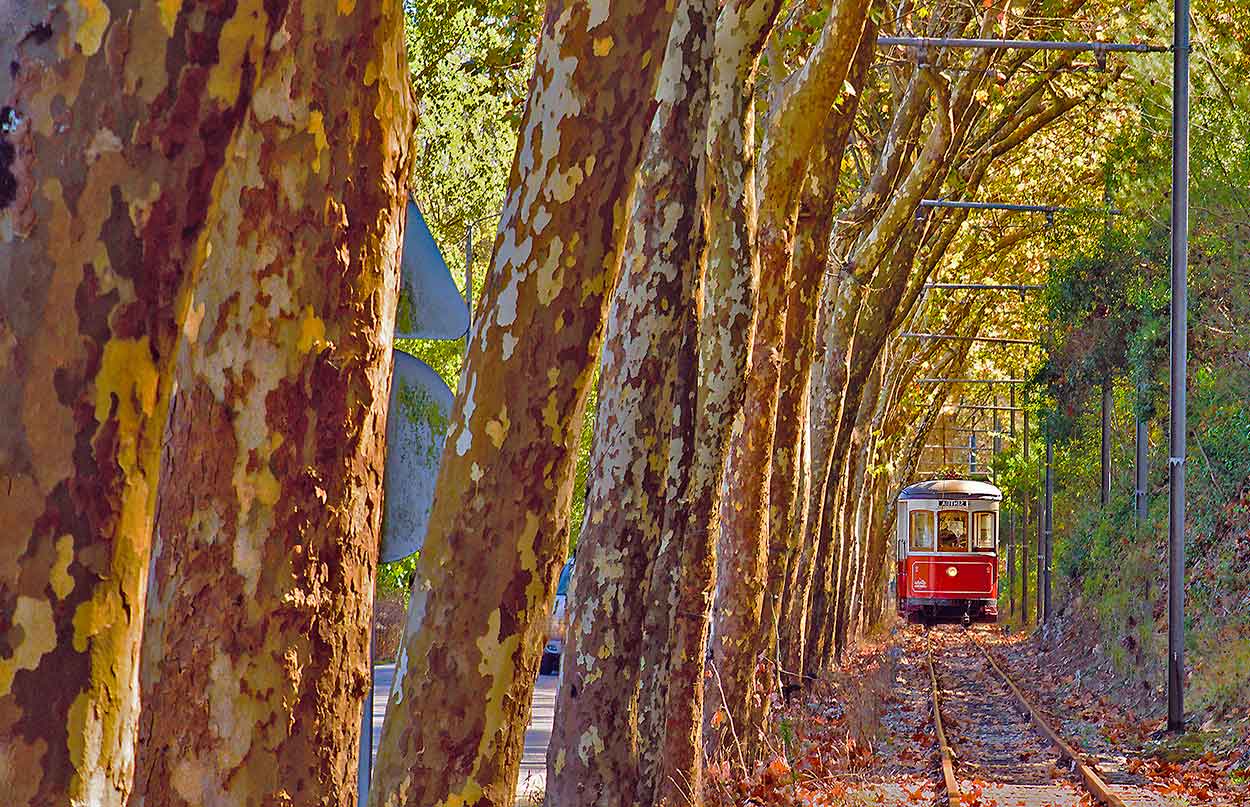 One of the greatest treats for people visiting the historic village of Sintra is the chance to ride on an old tram through vast swathes of verdant countryside to the glorious beach town of Praia das Maças.

The 13-kilometre-long trip takes about 45 minutes and runs right through the year between Vila Alda (in the Sintra district of Estefânia) to its beach-side terminus on Portugal’s golden, sandy Atlantic shoreline.

The somewhat futuristic idea of constructing a tram line out of Sintra to the coast first came about in 1886, with several attempts undertaken without any success.

Things changed for the better in 1898 when a local company was awarded a 99-year concession to operate a steam train, but this plan was later replaced by the electric traction model we see today.

In 1904, the first section of the line (almost 9 kilometres in length) was inaugurated between Vila Velha in Sintra and São Sebastião in Colares, after which it was extended to Praia das Maçãs (which means Apple Beach) a few months later.

Nowadays, the iconic Eléctrico de Sintra (as it is known locally) continues to weave a picture-book passage through Sintra’s lush landscape of exotic plants and trees (many of them brought back from faraway lands during the Age of Discovery) interspersed amongst blankets of dark green bracken.

Passengers are offered a teasing glimpse of some of Sintra’s main landmarks at a series of points along the way, most notably Sintra Palace (with its two unmistakeable conical chimneys), the soaring towers and minarets of Pena Palace and the imposing (and very ancient) Moorish castle that overlooks the entire Sintra region and beyond.

Nourished by the pounding Atlantic Ocean, Sintra’s microclimate ensures that its mountain slopes remain emerald green throughout the four seasons and in some parts the landscape seems almost subtropical with its kaleidoscope of colour created by a profusion of periwinkles, magnolias, camellias, azaleas, crocuses and rhododendrons, not forgetting their sweet fragrances.

After the rain, the thick moss seems swollen like a wet sponge and the foxglove bells are full to the brim to create the kind of scene that once inspired Lord Byron to describe Sintra’s fairytale setting as ‘a glorious Eden’ in his most famous poem, ‘Childe Harold’s Pilgrimage’.

Prior to departure from Sintra, the vintage atmosphere of the tram’s interior sets a refined tone reminiscent of the 1930s when this type of transport was still very much in its heyday.

The route is equally absorbing as you pass through some of the most scenically appealing places in the whole of Portugal, including Colares, an enchanting coastal town renowned for its fine wines produced in the foothills of the Serra de Sintra.

At journey’s end, passengers are rewarded with spectacular views of the sparkling ocean at the tram’s terminus just a stone’s throw from Praia das Maças (indicated on the Google map below), one of Lisbon’s best beaches.

Here you can bathe to your heart’s content before dining on the freshest, tastiest fish and seafood dishes anywhere in the country.

Additionally, you can enjoy a leisurely walk about a kilometre up the coast to Azenhas do Mar, a charming little hamlet that somehow manages to cling to the cliffs like a large white limpet.

But whatever you do, you’ll need to keep one eye on the time because there’s still the riveting prospect of an exhilarating tram ride back to Sintra to look forward to.