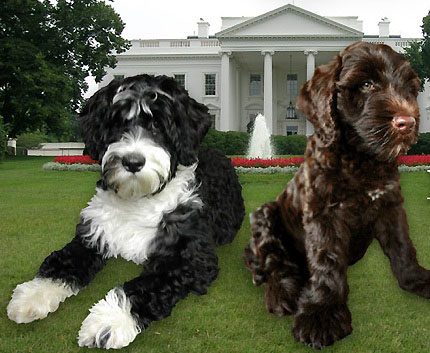 The Portuguese water dog is one of the earliest known breeds

It’s a little-known fact that, during their two terms in office, the Obama family had two of the best pets known to man living with them at the White House – Bo and Sunny – both Portuguese water dogs.

This magnificent dog, which normally stands around 60 centimetres (24 inches) tall at the shoulder, is one of the earliest known breeds and ranked among the rarest species of dog in the world, according to the Guinness Book of Records.

The Portuguese water dog (cão de água) has short floppy ears, a long tail and long wavy or curly hair all over, an asset in cold conditions, particularly water.

Friendly and intelligent, they make perfect pets and are often mistaken for poodles, especially when young.

It’s also interesting to note that they have webbed feet, which enables them to swim with all four legs and dive to depths of 3 metres (10 feet), hence their name.

A report written by a Portuguese monk in the late-13th century described seeing a dying sailor being brought out of the sea by a dog with a ‘lion cut’ due to the style of clipping the fur like a mane around its head, a practice said to aid his propulsion through water that is still maintained today. “The dog had a black coat of rough fur, clipped to the first rib, and with a tuft at the tip of the tail,” he wrote.