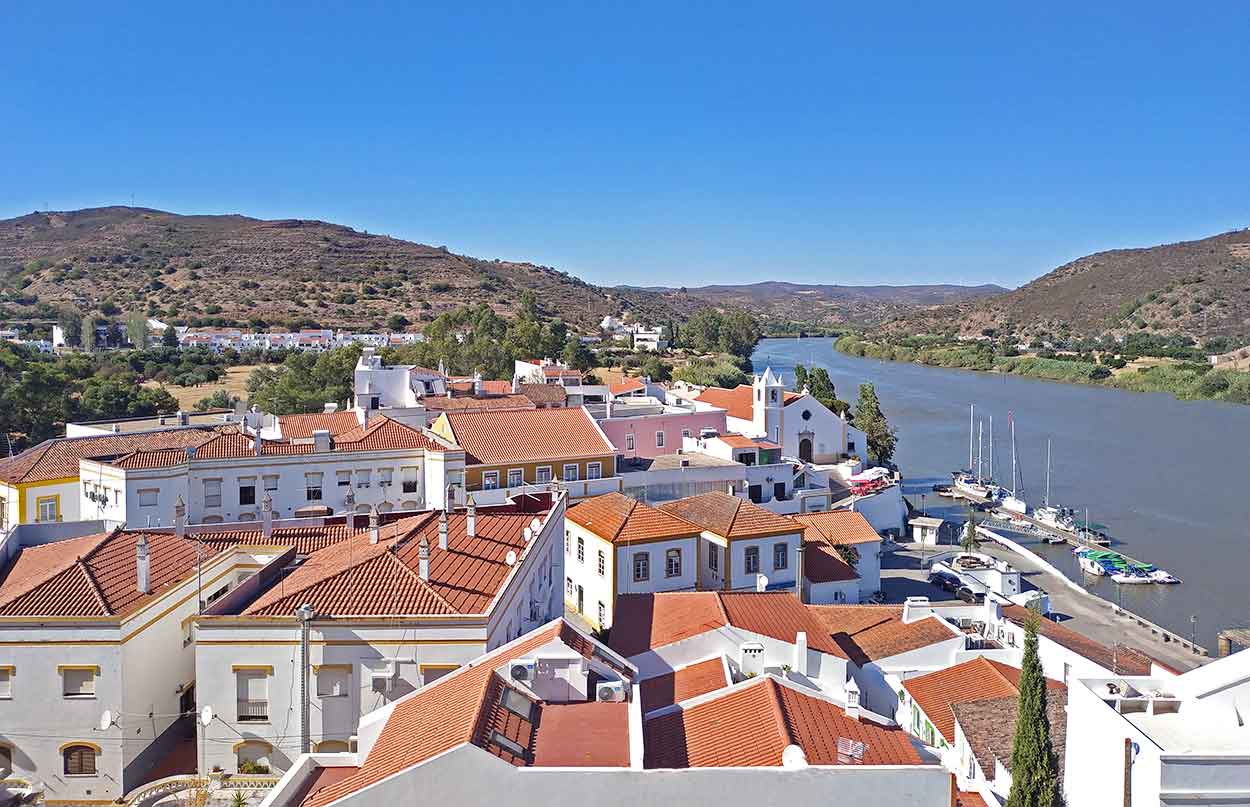 Alcoutim in the Algarve

Boasting an idyllic waterside setting in the north-eastern corner of the Algarve, the enchanting town of Alcoutim is a place of unspoilt peace and quiet just across the River Guadiana from neighbouring Spain.

Already a strategic river port in ancient times, it was occupied for long periods by the Phoenicians, Greeks, Romans and the Moors (the name Alcoutim comes from the Arabic Al-Qutami, which means peregrine falcon), but its small size belies the immense impact this sleepy riverside town has had on Portugal’s history over the centuries.

Most notably, it was in Alcoutim that an important, albeit short-lived peace treaty was signed by King Fernando I of Portugal and Henry II of Castile on the 31st of March 1371, thus terminating the First Fernandine War.

Situated on a hill overlooking the river, Alcoutim Castle is a rectangular-shaped fortress made from the local schist stone. Its defences were improved by both King João II (1455-1495) and his successor King Manuel I (1469-1521), the remains of which exist today.

It was the scene of a major conflict during the Restoration Wars (1640-1668) when Portugal managed to free itself from Spanish rule, during which much of the castle was badly damaged, leaving it to ultimately fall into ruin.

Besides the castle, visitors come to marvel at Alcoutim’s tight cluster of brilliant white houses with their striking red roofs and enjoy relaxing river views across to the similarly tranquil town of Sanlúcar del Guadiana, which has its own historic fortress – the restored Castillo de San Marcos.

Alcoutim has three lovely old churches to see on the leisurely walk down from the castle, namely the Ermida de Nossa Senhora da Conceição (built in the 16th century), the little Igreja da Misericórdia (early 16th century) and the town’s delightful parish church – the Igreja Matriz – which was built in the Renaissance style a few metres in from the riverbank.

Rising in the Spanish province of Albacete, the River Guadiana passes peacefully through Alcoutim en route to Vila Real de Santo António, where it gently spills out into the sheltered waters of the eastern Algarve. Adventurous visitors can literally ‘zip’ across the river on a cable ride that uniquely links not just Alcoutim and Sanlúcar but two different countries at the same time.

Sparsely populated, the areas around Alcoutim are amongst the most secluded parts of Portugal, with many of its towns and villages widely separated by vast swathes of picturesque countryside. Leaving by car to the south, the scenic road meanders along the banks of the River Guadiana for many kilometres as far as Foz de Odeleite, affording some of the finest views along the way.

The small mountain villages to the west on the road to Cachopo are where you will find some of the most authentic handicrafts in the Algarve, with high-quality rugs, vases, baskets and other items crafted to perfection by local artisans in the same manner their ancestors did for centuries.

Heading north takes you to the Lower Alentejo region of southern Portugal, a great expanse of colourful vistas and dazzling whitewashed villages. A pleasant half-hour drive north of Alcoutim brings you to the Guadiana Valley Natural Park (Parque Natural do Vale do Guadiana), a protected area very popular with hikers and bird-watchers.

Further north lies the Great Lake of Alqueva (Grande Lago de Alqueva) which covers more than 250 square-kilometres and is Europe’s largest man-made lake. There you can hire boats with enough berths for several people and tour the area on water instead of by road.