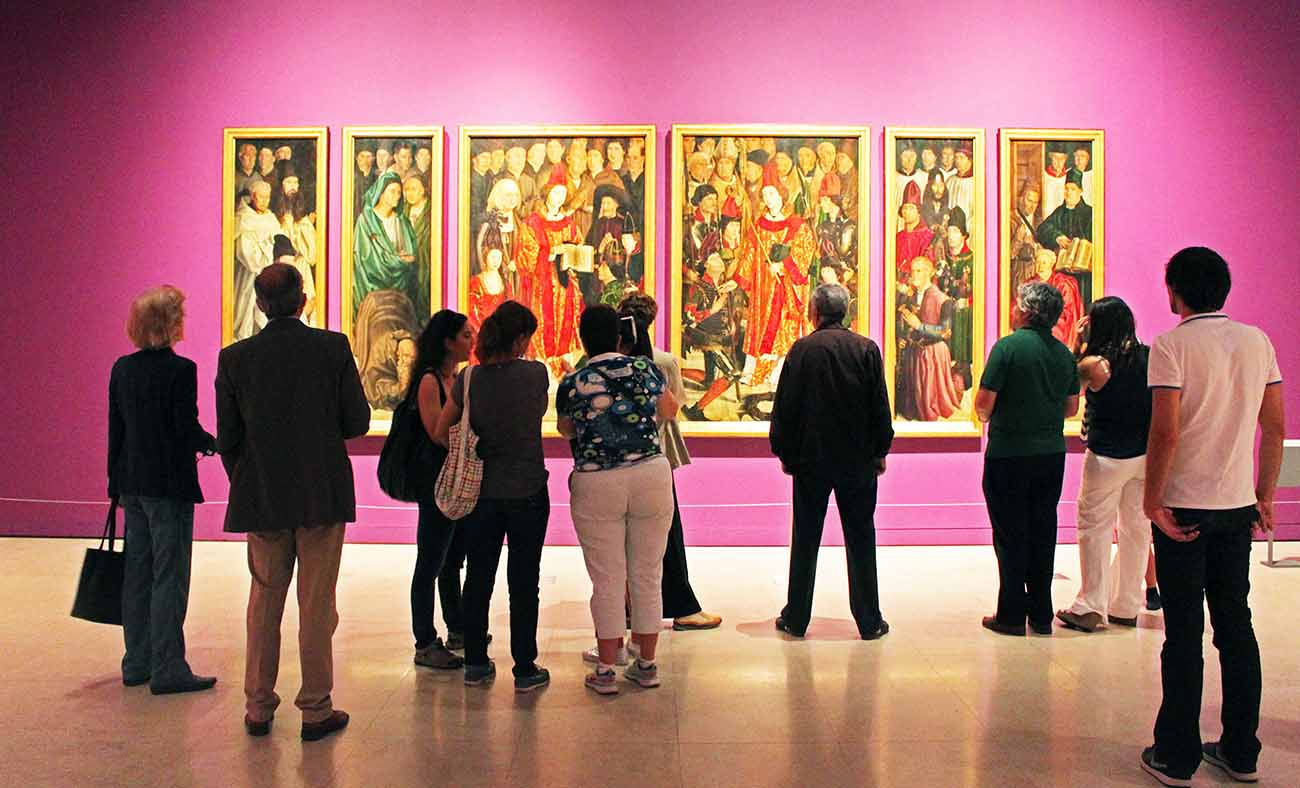 Portugal's most famous painting - the Panels of St Vincent

Portugal’s most acclaimed piece of art is the six-panelled 15th-century painting by Nuno Gonçalves depicting a group of 58 people assembled together as a monumental representation of both the Portuguese royal family and a cross-section of the country’s high society.

This eclectic collection of people is engaged in an act of veneration directed towards St Vincent (around whom the group is gathered) and the court’s inspiration for Portugal’s military expansion into North Africa.

Working in the second half of the fifteenth century, Nuno Gonçalves was the first and unquestionably the greatest among Portuguese painters. With a single masterpiece he managed to acquire one of the foremost places in the history of European art.

Between 1458 and 1462, when Louis XI was succeeding Charles VII on the French throne, Gonçalves proved himself to be on a par with the great Flemish masters and emerged as the forerunner of the famous portrait painters of the Renaissance period.

In these six panels (assumed to have been arranged around a central statue that has since been lost), Gonçalves managed to dispose in perfect symmetry all the figures of a composition that was quite crowded but perfectly clear.

Not the least detail of the essential Portuguese character escaped the artist, who took just as much care over the strong features of a fisherman as he did the head of the king.

In this extremely revealing ceremonial picture, all the figures seem to combine the purposefulness of an evocative narration with a contemplative vision, characterised not only by the expressive look of concentration on their faces but also by the sophisticated pictorial definition of their costumes and accessories.

Today, as a succession of visitors stand before the Panels of St Vincent in the elegant surroundings of the Ancient Art Museum (indicated on the map below) in Lisbon, one of Portugal’s top cultural attractions known locally as the Museu Nacional de Arte Antiga, Gonçalves’ frieze of faces unfolds before their eyes.

For a 15th-century painter, his modelling was very powerful with the subtlest shades of colour still extraordinarily life-like some five hundred and fifty years later.

In one of the main panels, Prince Henry the Navigator is portrayed with his hands folded and his gaze both thoughtful and intent beneath an enormous black hat, while Queen Isabella’s moss-green silk petticoat perfectly matches her extraordinarily high, velvet-ribboned head-dress as she clutches her rosary with religious fervour.

The side panels are no less striking; in one, the helmet of a Moorish warrior gleams against a background of white surplices while in another a hunchbacked beggar kneels grotesquely in order to exhibit his deformity.

At the time of their creation, the Panels of St Vincent heralded the coming of a new era – the golden age of Portugal and the Discoveries – as the country’s sea captains gradually navigated their way down Africa whilst crossing the Equator for the first time.

Gonçalves’ masterpiece first adorned the ancient walls of high above the altar where the panels stayed until 1742 before being transferred to the palace of Mitra north of the capital, thankfully avoiding any damage during the great earthquake of 1755. Mitra Palace was the former summer residence primarily of the archbishops and then the patriarchs of Lisbon.