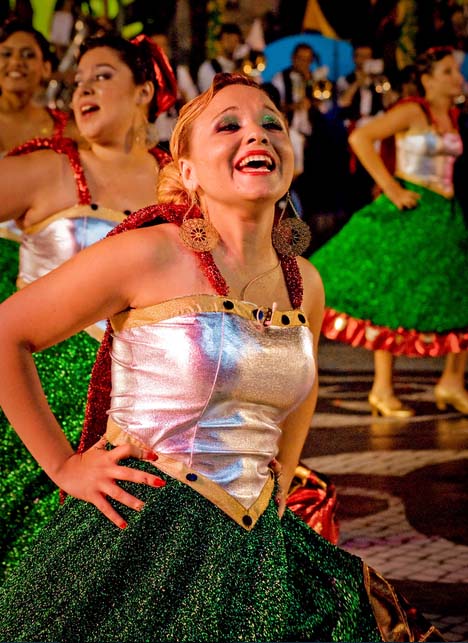 June is the month when Lisbon explodes into life

Put a note in your diary for next year, June is the month when Lisbon explodes into life with dancing in the streets and sardines sizzling on every corner. It’s the month of the Santos Populares, or Festas de Lisboa.

The most notable tribute of the June festas is extended to the Lisbon-born preacher and saviour of lost souls, Santo António or Saint Anthony, whose life is celebrated each year on the evening and throughout the entire night of the 12th of June every year starting with a lively carnival-style parade down Lisbon’s main thoroughfare, the Avenida da Liberdade (indicated on the map below).

The place to be after the procession is the Alfama district, the oldest part of the city. Its narrow cobbled streets bubble with a lively joie de vivre as the flood of light from innumerable Chinese lanterns pours into the winding streets.

Budgerigars and canaries compete with the sonorous folk and fado music performed live in some of the main squares as the feast of Santo António begins. Santo António was an exceptional human being who lived an extraordinary life.

He was born in 1195 in a house owned by his parents, Martinho de Bulhões and Teresa Taveira, which is now marked by a church and museum bearing his name a stone’s throw from Lisbon’s magnificent Sé Cathedral, where he was christened eight days after his birth and given the name of Fernando.

After joining the Franciscan Order in 1220, he became a learned and passionate preacher renowned for his devotion to the poor, spending the last months of his life in Padua, Italy, where he died in 1231 at the age of 36 having performed many a miracle throughout the course of his eventful life.

He had a heart for children, lovers and all those who had lost something and in 1934 Pope Pius XI canonized him and declared him a patron saint of Portugal.