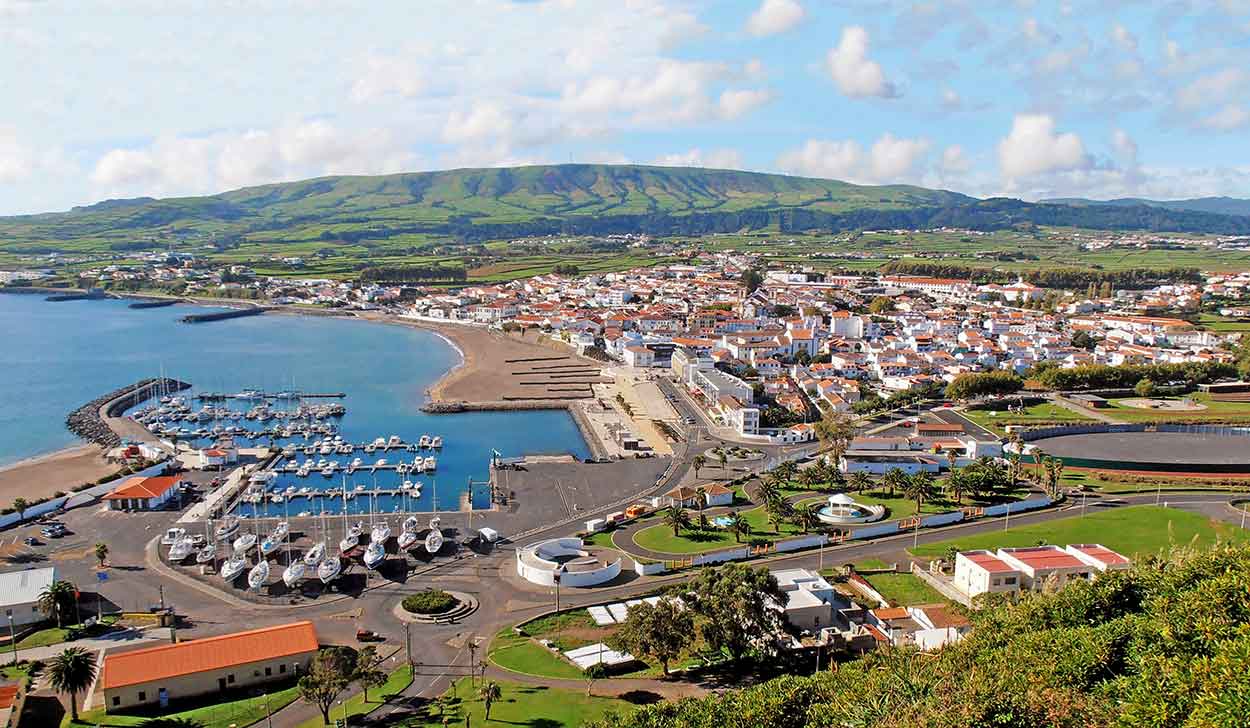 Nestling on the eastern shores of Terceira Island in the central group of the Azores, the picturesque port town of Praia da Vitória features a large bay with a long sandy beach and a modern marina popular with ocean-crossing vessels.

The town celebrated a famous victory in 1581 when Spanish troops attempted to seize the island at Baía da Salga, a small village just 10 km to the south. They were thwarted and eventually driven away by the release of a large herd of cattle onto the sea’s shore.

With its attractive main square and pedestrianised main street, Praia da Vitória is one of the most impressive-looking places in the Azores, having been elevated to the status of vila (comparable to town) in 1480.

Today the town’s welcome stretch of pale-coloured sand (quite rare in the Azores) and bustling modern marina give it a relaxed holiday vibe, with a succession of yachts and other seafaring vessels stopping en route across the Atlantic Ocean to enjoy its special atmosphere, especially during the warm summer months.

Founded by one of the island’s first settlers, its pretty parish church is remarkable for the delightful Gothic doorway, fine Manueline architecture and gold Baroque side chapel. On Rua do Cruzeiro on the other side of the town centre, the striking Império Do Divino Espírito Santo da Caridade is an interesting chapel-like structure with a wonderfully ornate interior.

There’s plenty to see and do in close proximity to Praia da Vitória, making it the ideal base from which to explore the whole of the enchanting island of Terceira. At Vila de São Sebastião – situated midway between Praia da Vitória and the capital, Angra do Heroísmo – the 15th-century church of São Sebastião is arguably the most interesting on the island with many rare frescoes and fine Gothic features.

Further inland lies the picturesque mountain area of Serra do Cume, a place of great natural beauty that affords visitors splendid views of the island’s fertile pastures stretching as far as the eye can see. At 545 metres (1,788 feet), its highest point offers spectacular panoramic vistas of Praia da Vitória and the surrounding coastline.

In the centre of the island and easily accessible from Praia da Vitória lies Furnas de Enxofre, an area of volcanic activity best explored by following a walking route that snakes over a series of sulphurous fumaroles and hot springs, with plenty of information panels to be found along the way.

Lajes, a few kilometres north-west of Praia da Vitória, features a whale museum housed in a former boathouse and in the centre of the island you’ll find Algar do Carvão, a geological nature reserve with deep caves containing numerous lakes, stalagmites and stalactites. This huge lava tube around 100 metres (328 feet) in length was formed during a volcanic eruption some 2,000 years ago and today is one of Terceira Island’s top tourist sights.

Another popular attraction for visitors touring the island is the Biscoitos winery and museum about twenty minutes by car from Praia da Vitória. The place is renowned for its excellent Verdelho wines and fortified liqueurs which can be tasted and purchased at the end of a guided tour.

A short drive south of Praia da Vitória brings you to Pontas das Contendas where the islets around the promontory offer fine Atlantic views and harbour many rare seabirds.

And anyone visiting the town in August will surely want to get involved in the Festas da Praia when its entire population seemingly gathers for a large costumed parade and a full programme of other fun-filled festivities.