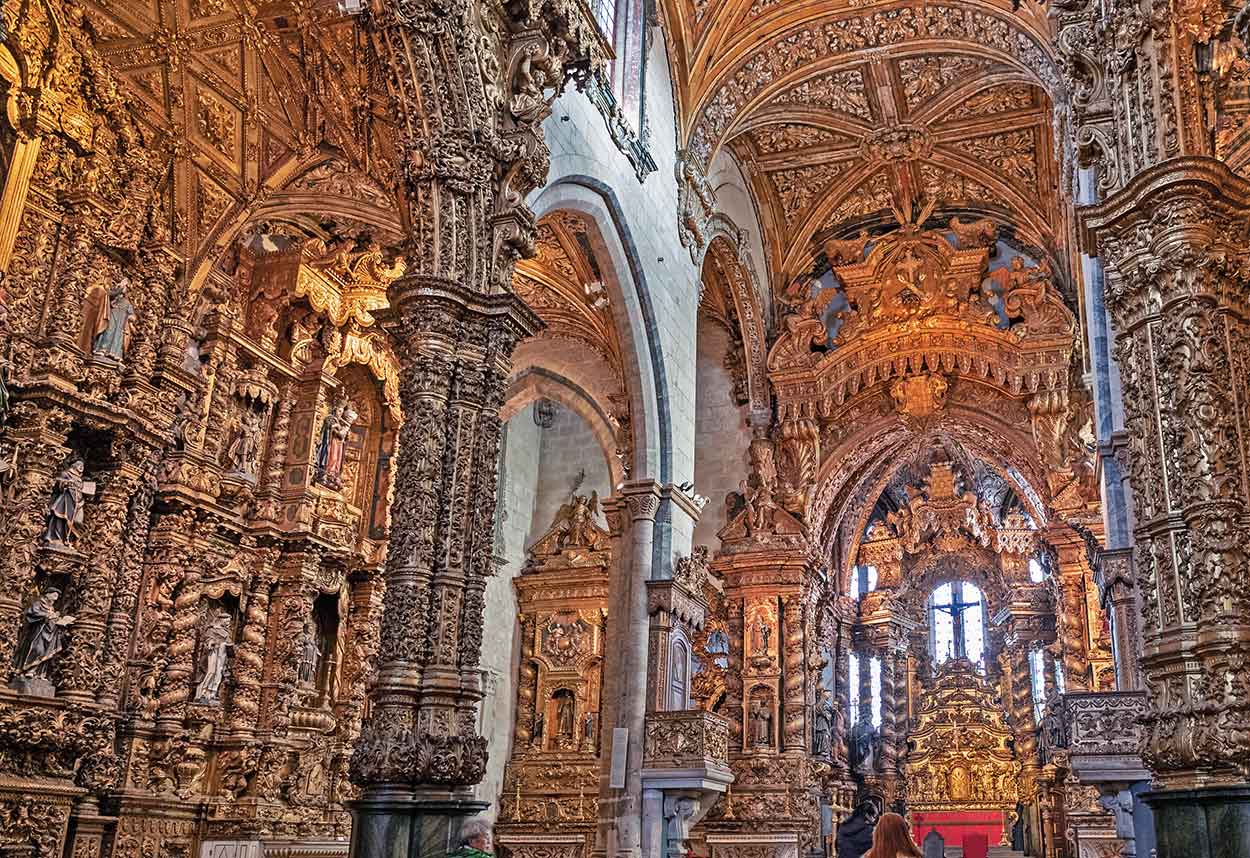 Portuguese Baroque architecture is a revelation that’s held in great esteem around the world for its vigour, purity and astonishing abundance, especially in the north of the country.

There, in places like Barcelos, Lamego, Braga and Viana do Castelo, entire squares are flanked by the exquisite façades (and interiors) of convents, palaces, churches and stately mansions that have lost none of their grace and dignity over the centuries.

Named after the Portuguese word for a rough or imperfect pearl (barroco), the style marked the height of a period of flamboyance as Portugal re-established its independence from neighbouring Spain and vast amounts of gold poured into the country from Brazil.

Many elaborate 18th-century buildings in Portugal were dominated by Italian influences, most notably Nasoni’s dynamic designs in and around the northern city of Porto, along with the German-born Ludwig’s monumental designs in the south.

Braga is blessed with many splendid pieces of Baroque architecture, namely the high choir and organs of its early 16th-century cathedral, as well as the magnificent 577-step stairway leading up to the hilltop shrine of Bom Jesus, just to the east of the city.

The north of Portugal has many more fine examples to enjoy, like the elaborate pilgrimage church of Nossa Senhora dos Remédios (Our Lady of Good Remedy) in the charming town of Lamego, also accessed by a remarkable staircase.

Baroque’s architectural emphasis is focused on the concept of motion, and in some cases optical illusion, with the principal aim of highlighting a building’s drama, grandeur and dynamism.

This eye-catching style can also be seen in the talhas douradas, an ornate form of decorative wood sculpture covered with gold leaf predominantly used in religious art, a classic example being the library of Coimbra University.

Also evident in some of Portugal’s most important buildings, Baroque sculpture was another key architectural feature developed by some of the country’s most talented artists, such as Joaquim Machado de Castro whose impressive work can be seen on the façade of Lisbon’s imposing Basílica da Estrela, which was built in the Roman style at the end of the 18th century.

One of the best examples of Baroque architecture in Portugal is the magnificent church of Santa Engrácia in Lisbon. Featuring a large dome and undulating walls, it is notable for the richness of its coloured marble, spacial interior and a general sumptuousness typical of the churches and palaces constructed during the resplendent reign of King João V in the first half of the 18th century.

João V was a great advocate of the Baroque style, and arguably his most extravagant project was the huge church, palace and convent complex he commissioned in Mafra (indicated on the Google map below), a small town just 40 kilometres to the north-west of Lisbon.

Founded in 1717, it was built in fulfilment of a vow the king made should God grant him an heir to the throne (which eventually came to pass) and is strikingly dominated by an imposing Italianate façade, one of the largest in southern Europe.

It’s also possible to admire the best of Portugal’s Baroque architecture on the Atlantic islands of Madeira and the Azores, chiefly in the respective churches of São João Evangelista (in the city of Funchal) and São Gonçalo (in the UNESCO-classified historic centre of Angra do Heroísmo).

Need more inspiration for your next visit? Listen to the Portugal Travel Show, the podcast for people planning a trip to sunny Portugal;