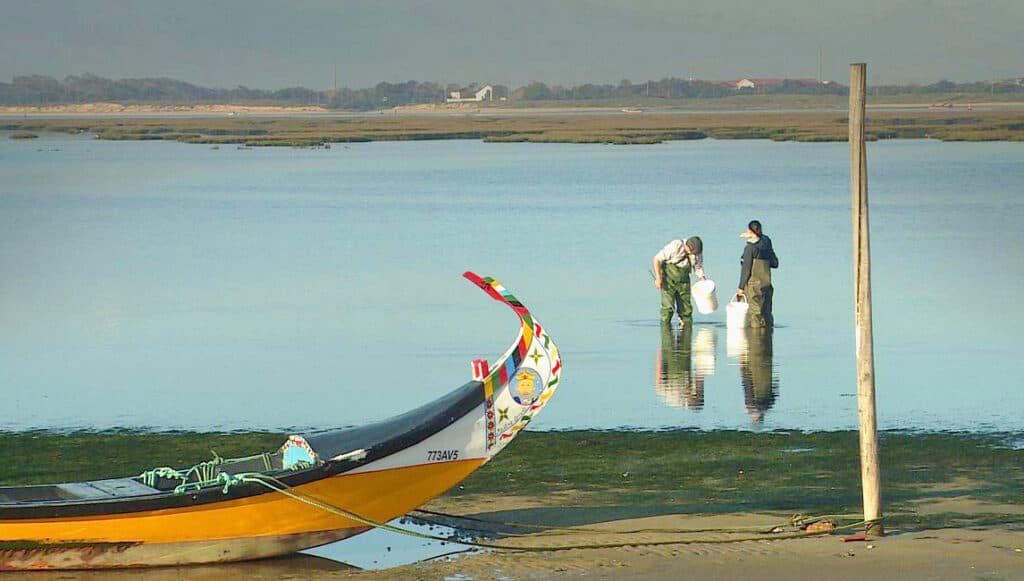 Uniquely situated behind a long offshore sandbank, the Ria de Aveiro stretches for about 45 km between Ovar to the north and Mira to the south, reaching a width of about 10 km at its widest point.

This enchanting lagoon of mingled sea and fresh waters comprises a large area of wildlife-rich wetlands incorporating salt marches and a scattering of fishing villages nestling along its peaceful banks.

Linked with the Atlantic by a narrow water channel known as the Barra, the Ria de Aveiro is like no other part of Portugal; even its inhabitants are a race apart being of Phoenician origin. They are a prolific people who have had to adapt quickly and efficiently to their changing circumstances over the centuries.

Few visitors are aware that the thriving seaport of Aveiro and its considerable stretch of coastline was suddenly sealed off by a ferocious Atlantic storm in 1575, creating a lovely lagoon dotted with little islands and crisscrossed by a series of water channels.

In 1808 another great storm broke through the sandbar and opened up the old channel to the sea, resulting in life-giving tides once again sweeping across the bar, with Aveiro finally reclaiming its position amongst the finest harbours in Portugal.

The Ria has since brought its own rare form of prosperity to Aveiro and its environs in the form of iodine-rich seaweed, which farmers have long-been keen to use as a powerful crop fertiliser.

For many years, the fertiliser was traditionally collected in moliceiros (brightly-painted boats with flat bottoms and swan-like necks), many of which can still be seen emblazing the local waters.

Rich fields of maize and rice have been formed by the building up of layers of seaweed that cover the sandbanks and beaches at low tide, and today the Ria de Aveiro is blessed with an abundance of fish (bream, skate, mullet, shad, lampreys, eels, etc.) much of which is destined for the local restaurants.

The local salt industry also dates back many centuries, first to the Romans and later to Countess Mumadona Dias who bequeathed her salt-pans to the monastery at Guimarães in 959 AD.

Greatly enriched by many long years of manuring, this land of pearl-grey salt-beds dotted with cone-shaped heaps of salt is now a thriving centre for tourists who always enjoy a trip around this enchanting water world in one of the traditional moliceiro boats.

Aveiro itself is one of the most charming places in central Portugal. Affectionately dubbed the Venice of Portugal because of its network of canals crisscrossing the town, it has emerged in recent years as a popular destination for tourists visiting this part of the country.

Housed in the former Jesus Monastery, Aveiro’s fascinating municipal museum depicts the life of King Afonso V’s daughter, Santa Joana, who died there in 1490. Close by stands the 15th-century São Domingos cathedral and Carmelite Church, which is finely decorated with paintings depicting the life of Saint Teresa.

Often lost amidst the haze and mist of the Ria de Aveiro, the small town of Ílhavo is famous for its deep-sea fishermen whose history is very well portrayed in the local maritime museum. It is also home to one of the most famous manufacturers of porcelain, that of Vista Alegre, renowned throughout the world for the high quality of its crockery since 1824.

Just 11 km west of Aveiro lies Costa Nova, one of Portugal’s finest coastal villages. Notable for its long row of brightly-striped wooden houses adjacent to the ocean, this charming seaside resort has evolved from a huddle of fishermen’s huts into one of Portugal’s top beach destinations.

North of Costa Nova and less accessible, the 600-hectare São Jacinto Dunes Natural Reserve (Reserva Natural das Dunas de São Jacinto) comprises some of the best-preserved dunes in the whole of Europe. With several kilometres of walking trails, it is home to over 100 species of bird and provides visitors with the chance enjoy the wild and spectacular natural environment of one of Europe’s most unspoilt coastlines.